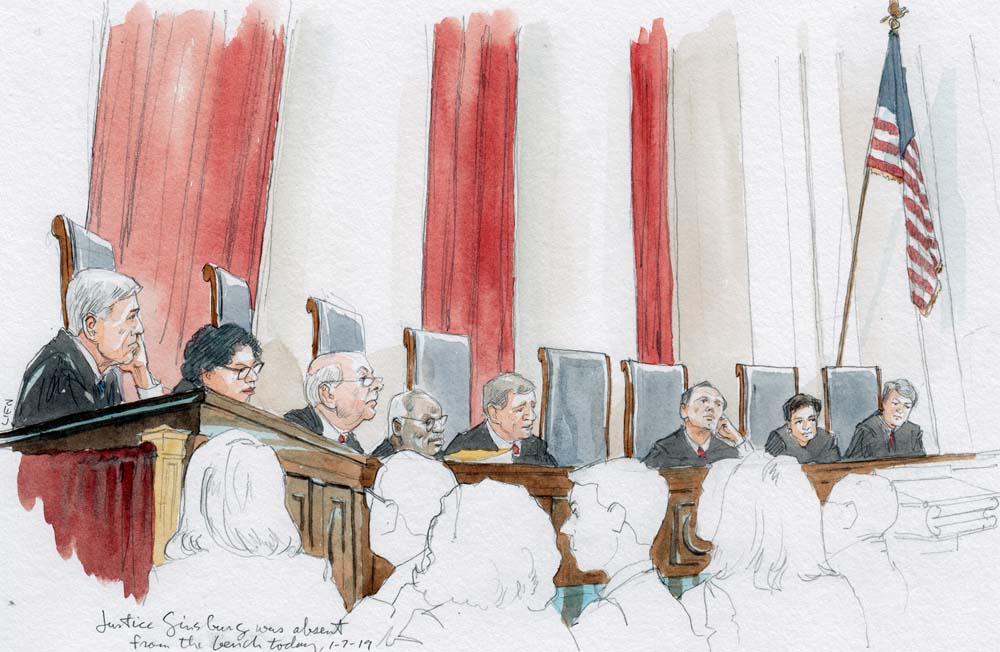 Justice Ginsburg was absent from the bench today.
Share

Much of the federal government may be in shutdown mode, but the Supreme Court is still open for business.

The Supreme Court opened its January session Monday morning with argument in Merck Sharp & Dohme Corp. v. Albrecht, a case about the workings of the Food & Drug Administration (still partially open) and when the agency’s actions may insulate drug manufacturers from state tort suits through “impossibility pre-emption.” An important and often-used litigation defense for manufacturers, impossibility pre-emption doctrine shields manufacturers from state liability when it would be impossible for them to comply both with FDA regulations and with state-law duties to warn. 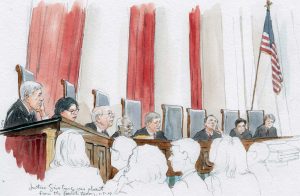 Justice Ginsburg was absent from the bench on Monday (Art Lien)

In this case, more than 1,000 patients sued drug manufacturer Merck for injuries allegedly arising from use of its FDA-approved prescription drug Fosamax. Merck raised impossibility pre-emption as a defense, arguing that the FDA had rejected Merck’s proposal to add a new warning similar to the one plaintiffs allege was warranted. Opinions in the courts below and the parties’ and amicus briefs before the Supreme Court raised narrow technical questions about what the FDA meant in its official response letter rejecting Merck’s proposal, as well as expansive questions about how to determine the FDA’s meaning in pre-emption cases and who should resolve ambiguities about that meaning, a judge or jury. At Monday’s argument, agency-process questions and hypotheticals featured prominently in the justices’ quest for the meaning behind the FDA letter and for interpretive principles to guide that quest.

All seemed to agree on the chronology: When reports surfaced of Fosamax users suffering a type of serious femur break called “atypical femoral fracture,” the FDA requested data from manufacturers. At that time, Merck also submitted a Prior Approval Supplement (PAS) to the FDA, seeking permission to add specific warnings to the Fosamax label, including one about “stress fractures.” The FDA sent a “Complete Response Letter” to Merck approving a new warning for one section of the label, but rejecting Merck’s proposed “stress fracture” warning for the other section. After convening a task force to study the problem further, the FDA required all manufacturers of the drug to include a warning different from the one Merck originally proposed.

What the FDA meant in its letter and what context to consider in gleaning meaning divides the parties and, apparently, the justices. Merck argued first that the FDA’s rejection of a manufacturer’s request to warn of a risk pre-empts state failure-to-warn claims based on that risk “as a matter of law,” owing to the “statutory and regulatory framework.” Merck focused on the portion of the statute requiring the FDA to initiate discussions to reach agreement with manufacturers on new warnings and the interpretive “presumption of regularity,” which assumes that the FDA follows its governing rules. Merck then argued that the absence of further revisions from the FDA until after its task-force report demonstrates that the FDA rejected Merck’s proposed warning as unwarranted by the data at that time. The respondents, plaintiffs in the lawsuit against Merck, pointed to a different subsection in the same statute emphasizing that courts should not interpret the provisions to absolve manufacturers of their responsibility for the content of their labels. They also argued that the FDA’s post-task-force rejection of the “stress fracture” terminology as insufficiently strong shows that the initial rejection was based on terminology.

Dvoretzky reiterated throughout his argument that “the United States has told us” the FDA “understood [Merck’s proposed] warning” to be about atypical femoral fractures. One seemingly straightforward way to resolve ambiguity in what the FDA meant is to ask the FDA. To this end, the justices allotted argument time to Malcolm Stewart, the deputy solicitor general participating as amicus curiae supporting Merck’s position. But the justices, with the possible exception of Chief Justice John Roberts, did not appear satisfied with taking the FDA at the solicitor general’s word. Instead, Kagan, along with Justices Sonia Sotomayor and Neil Gorsuch, pressed Stewart for guidance on how to determine what FDA understands “at any given moment” and “what are we to look to when we decide whether it’s impossible for Merck to change its label.” Stewart admitted that the FDA’s letter was ambiguous and that it “would obviously have been better if [it] had stated without ambiguity the reason we are rejecting [the] proposed addition.” The case therefore appears to turn on competing ideas of how to interpret that ambiguity in the context of impossibility pre-emption.

Direct discussion of the “clear evidence” standard used to resolve ambiguity in impossibility pre-emption, derived from the Supreme Court’s decision in Wyeth v. Levine, was surprisingly absent from the argument. Though the justices and advocates vigorously debated what evidence to consider and how clearly that evidence illustrated the FDA’s meaning, the argument did not touch on further articulation for the “clear evidence” standard or the appeals court’s formulation of “clear and convincing” or “highly probable,” or even the presumption against pre-emption. Instead, the justices largely pressed the parties on the technical details of how the agency interacts with drug manufacturers over labeling, what the factual context most logically implies in this case, and whether the two pieces of the statute point to different conclusions.

Some of the justices also appeared concerned with the broader implications of the case for the functioning of the FDA. Kagan suggested that the “idea that [FDA has] to look through all of your data … in order to find out what the real risk is, [] and that if they don’t manage to do that, you’re exempt from suit” seems to conflict with the statutory “rule of construction that says that manufacturers have primary responsibility over their labels.” Gorsuch wondered whether Merck’s interpretation would “create a moral hazard that encourages manufacturers to supply the FDA with a lot of information, overwhelming with data,” and propose an “inartfully drafted warning that it thinks is reasonably calculated to be refused so that it can avoid … its own costs of negligence.” Sotomayor expressed concern about “the incentive for manufacturers to continue working expeditiously with the FDA to effect changes.”

Justice Stephen Breyer, echoed at one point by Roberts, raised issues about the delicate balance involved in FDA judgments about under- versus over-warning. Breyer worried that going “too far in allowing the tort jury to find mislabeling” would hurt “the vast majority” of potential patients who “can benefit from this medicine” by deterring doctors from prescribing it. “[O]n the other hand,” he mused, the failure to include an important warning “will hurt that minority” of patients susceptible to that side-effect. This balance, Breyer suggested, is one best left to the FDA’s scientific and public health expertise rather than “50 different states really giving different signals to the manufacturers” about the right warnings.

These aspects of the how-to-decide question consumed nearly all of the argument time. Stewart had earlier noted that “the Court ultimately should construe” an ambiguous FDA letter. Justice Samuel Alito only raised the who-should-decide question near the end of the argument of David Frederick, who appeared on behalf of the respondents. Frederick agreed that “the complete response letter back and forth” was a “legal document that a judge can interpret.” But he added that the case also might raise factual issues about the meaning of the medical terms employed that judges could decide, “but so can juries.” When Breyer raised the possibility that this inquiry mixed issues of law and fact, Frederick refocused the attention on whether summary judgment was appropriate based on the uncontested facts alone: “You can affirm and you can say what you want to say about jury issues deciding, but, here, our position is the complete response letter as a matter of law could not have made it impossible for Merck to update its labels.” Frederick attributed this agnostic view on the judge/jury question to the “extremely bizarre” procedural route this multidistrict litigation case took from district court decision to appeal.

Although much of impossibility pre-emption case law to date has focused on predictions about whether the FDA would have rejected a hypothetical proposed warning, this case has prompted a existential-level debate about how to resolve ambiguity in what the FDA actually did. After argument, it appears that the justices’ views on the value of tort litigation and agency expertise will inform their decisions.