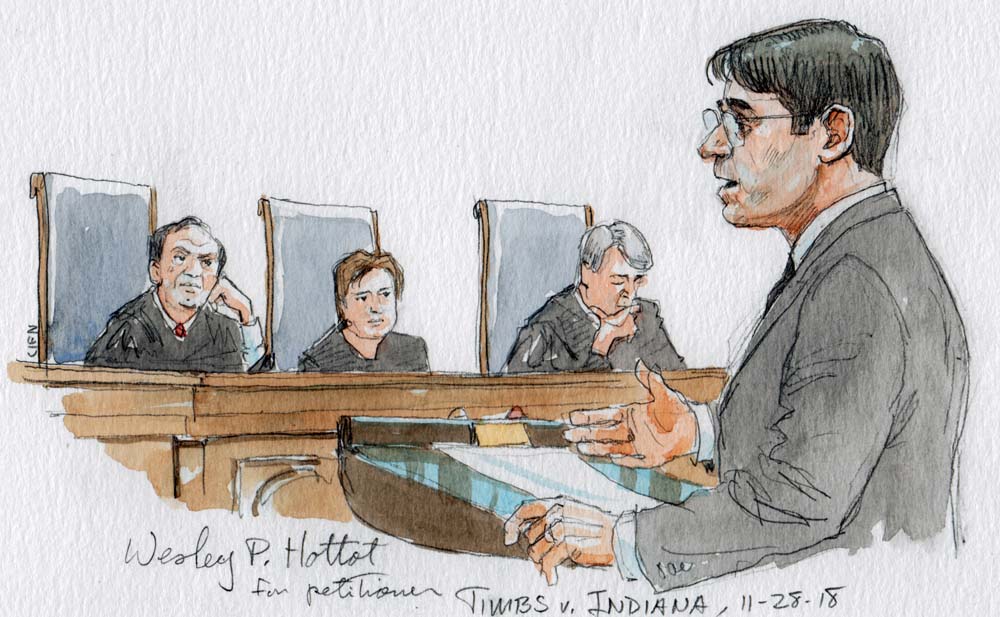 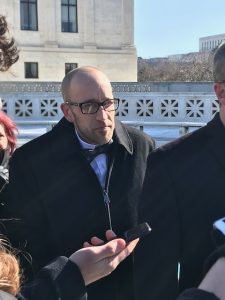 Today the Supreme Court heard oral argument in the case of Tyson Timbs, an Indiana man who lost his 2012 Land Rover after he pleaded guilty to drug charges. The state argued that it could seize the car because it had been used to transport drugs, but Timbs countered that requiring him to forfeit the $42,000 car – which he had purchased with the proceeds from his father’s life insurance policy – would violate the Eighth Amendment’s ban on excessive fines, particularly because the value of the vehicle was nearly four times the maximum fine that could have been imposed. The question before the justices today, however, was not whether the forfeiture of the Land Rover was constitutional, but instead whether the Eighth Amendment’s prohibition of excessive fines applies to the states at all. State and local governments are watching the case closely, because fines and forfeitures have become a key source of revenue – bringing in hundreds of millions of dollars each year. By the time oral argument ended this morning, the justices seemed ready to say that the excessive fines clause does apply to the states, even if they don’t say much more than that.

When it was originally enacted, the Bill of Rights – the first 10 amendments to the Constitution – applied only to the federal government; it did not automatically apply to the states. Since then, however, the Supreme Court has ruled that most provisions of the Bill of Rights do apply to the states through the Constitution’s 14th Amendment, which bars states from depriving anyone of “life, liberty, or property, without due process of law.”

Although the only question before the justices in Timbs’ case was whether the Eighth Amendment’s excessive fines clause applies to the states, the justices spent very little time on that question, because there appeared to be broad agreement on the court that it does. Justice Neil Gorsuch seemed to summarize the feeling on the bench in a question for Thomas Fisher, the Indiana solicitor general who argued on behalf of the state. Gorsuch asked, almost rhetorically: The excessive fines clause “applies to the states, right?” Gorsuch observed that most of the Supreme Court’s cases interpreting the Bill of Rights to apply to the states “took place in like the 1940s.” Somewhat incredulously, Gorsuch continued, “here we are in 2018 still litigating incorporation of the Bill of Rights. Really? Come on.” 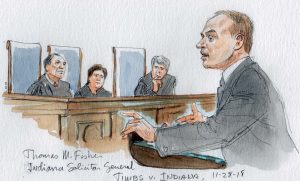 Justice Elena Kagan, who sits on the other end of the bench from Gorsuch and whose views are sometimes the opposite of Gorsuch’s as well, appeared to agree. There seem to be two questions here, she told Fisher. One is whether the excessive fines clause applies to the states; the second question involves the scope of the right if it does. “And really,” she suggested to Fisher, “what you’re arguing is about the scope of the right.”

There seemed to be significantly less agreement among the justices on the scope of the right – that is, whether fines like the forfeiture of Timbs’ car do indeed violate the excessive fines clause. Chief Justice John Roberts was unsympathetic, telling attorney Wesley Hottot, who represented Timbs, that Timbs’ Land Rover “was an instrumentality of the crime. This is how he got to the deal place and how he carried the drugs.” If a defendant was carrying the drugs in his car, Roberts stressed, “I think it’s pretty well-established” that the car can be forfeited.

Roberts and Justice Samuel Alito also expressed concern about how courts would decide whether a fine was excessive. Alito asked Hottot whether a forfeiture would be excessive if, instead of a Land Rover, Timbs had been driving a 15-year-old Kia or a $250,000 Bugatti. Roberts chimed in, asking Hottot whether it would matter if a defendant were very wealthy or very poor, so that the same fine would affect him differently. 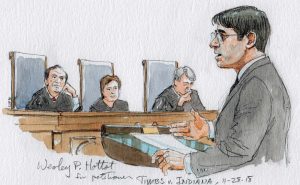 And Justice Stephen Breyer voiced unease about a potential incongruence between long prison sentences for relatively minor crimes, on the one hand, and a bar on substantial civil forfeitures on the other. It “seems odd,” Breyer posited, that the state can send someone to jail for life for stealing a golf club under a three-strikes law, but the state might not, if Timbs prevails, be able to seize the defendant’s Mercedes.

Justice Sonia Sotomayor was more sympathetic to Timbs and other opponents of civil forfeiture. “If we look at these forfeitures that are occurring today,” she emphasized, “many of them seem grossly disproportionate to the crimes being charged.”

Fisher urged the justices to limit the scope of the right and hold that, even if the excessive fines clause applies to the states, it does not extend to cases like Timbs’, involving civil forfeitures of property. But he faced an uphill battle, because to reach that result the justices would have to overrule a 1993 decision holding that the excessive fines clause does apply to civil forfeitures of property that are intended, at least in part, as punishment – something that there did not seem to be any appetite among the justices today to do.

At one point during Fisher’s time at the lectern, Kagan noted that, when the Supreme Court decides that a provision of the Bill of Rights applies to the states, “there are always going to be questions about the scope of the right” that applies. But when the justices “have decided whether to flip the switch” and decide whether a right applies, it hasn’t decided those questions, instead leaving them “for another day,” she explained.

Given the near consensus on the Supreme Court that the excessive fines clause applies to the states, the justices are likely to say so, but without much more. That could still be good news for Timbs, because two lower courts agreed with him that the forfeiture of the Land Rover was excessive; the Indiana Supreme Court ruled only that the excessive fines clause does not apply to the states at all.