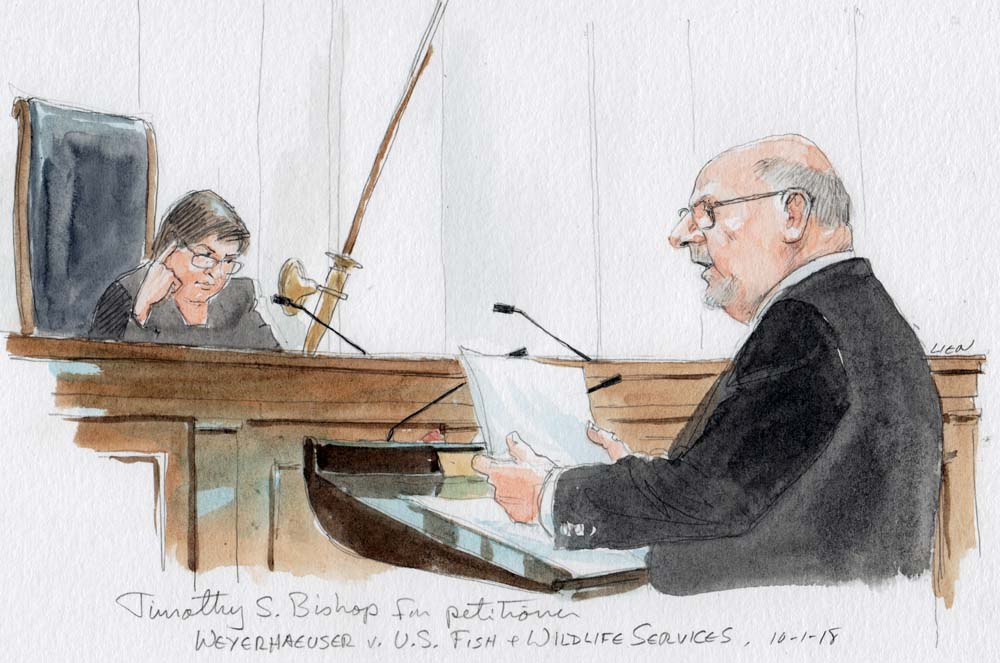 The justices seemed raring to go in the first argument of the new term. In this case challenging the U.S. Fish and Wildlife Service’s designation, under the Endangered Species Act, of an area in Louisiana as critical habitat for the endangered dusky gopher frog, the justices vied with each other for question time, with several sometimes trying to speak at once.

Counsel for Weyerhaeuser Company, Timothy Bishop, had barely opened his mouth when Justice Elena Kagan offered a hypothetical: Suppose that the only habitat of an endangered species no longer supported that species but, with a “reasonable effort,” it could come to support that species. Could the Fish and Wildlife Service designate such an area as critical habitat under the Endangered Species Act? 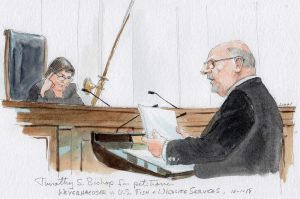 Variations on this theme dominated the rest of the argument. The major analytical fault line that emerged at argument was whether an area could be essential habitat for a species – or, perhaps, even “habitat” at all – if the species does not live there and could not live there sustainably without some restoration of the habitat. The frog has not lived in the designated area in Louisiana since 1965, but the service concluded that the area was “essential” to the conservation of the species because it contains the kind of ephemeral ponds in which the frog breeds.

Of course, it is very hard to tell justices’ votes based on oral argument, but on this question, the justices did seem to divide into two familiar blocs – the court’s more liberal wing appeared to lean in favor of the federal government’s critical-habitat designation for the frog, while three of the conservative justices appeared to lean in the opposite direction. (As is his custom, Justice Clarence Thomas asked no questions during the argument.)

The liberal justices asked most of the questions that were posed to Bishop. Kagan thought it “counter-intuitive” to conclude that the statute “would prefer” extinction of a species to reasonable efforts at restoration of a habitat. She suggested that “habitat” was not an “on-off switch,” or something that is just “sort of there and perfect, always,” but instead it was something that sometimes required “things to be done to it.” Justice Ruth Bader Ginsburg suggested that Bishop’s reference to a convention on migratory species and its definition of habitat as containing “suitable living conditions” supported considering the ephemeral ponds in Louisiana to be habitat that was suitable for breeding. Justice Sonia Sotomayor asked what would at a minimum be required for an area to be deemed critical habitat, if one departed from the assumption that the area must include all of the constituent elements required for optimal habitat. Justice Stephen Breyer thought the case was simply “a typical agency case” in which the question was whether the agency had strayed beyond the discretion given to it under the relevant statute. He seemed to be looking for evidence in the administrative record that would support the agency’s judgment about restoring the Louisiana land in order to support the frog.

The conservative justices came to life during the questioning of Deputy Solicitor General Edwin Kneedler. Chief Justice John Roberts opened with his own hypothetical: Supposing the frog’s ephemeral ponds existed in Alaska, could the government require building a “giant greenhouse” on that land to support the trees that support the frog? “[W]hat’s the limit?”, he asked, in determining the kinds of restoration efforts that could be assumed in defining critical habitat. He seemed to want the service, in this one decision on the critical habitat of one species on one parcel of land, to have spun out a complete theory of the legal limits of such designations across the board. Justice Neil Gorsuch wanted to know the statutory basis for imposing a reasonableness limit on restoration efforts, and Justice Samuel Alito wanted to know what reasonable restoration was. Alito also was keen to avoid having the case “spun,” as he put it, as a choice between the dusky gopher frog’s extinction and its survival; he, along with Gorsuch, questioned Kneedler about alternative government actions, such as purchasing private land, that could also help the species. 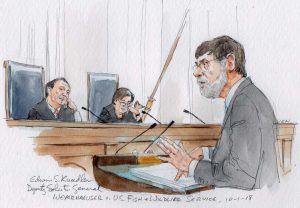 Although it is true that the tenor of the justices’ questions seemed to place them into two predictable camps, it is also true that no clear disposition developed, on either side, during the argument. It was not even clear whether the justices were puzzling mainly over whether the Louisiana parcel was “essential” to the conservation of the frog or over whether it was “habitat” at all. The case seems more complicated after today’s argument than it seemed before.

The second question in the case, concerning the reviewability of the service’s decision not to exclude the Louisiana property from its critical-habitat designation, received almost no attention. Bishop covered it only briefly, and Kneedler not at all. Gorsuch did ask the intriguing question of whether, even if the service’s decision on this point is judicially reviewable, the service could have said anything more than what it already said: that its analysis did not show that the costs of the designation were disproportionate in light of the benefits.

Interestingly, given the attention that has lately surrounded the court’s longstanding practice of deferring to the reasonable interpretation of an agency charged with implementing a statute, this practice made no appearance at oral argument. Indeed, “Chevron” was not mentioned once, despite the fact that the U.S. Court of Appeals for the 5th Circuit relied on it in upholding the service’s decision on critical habitat.