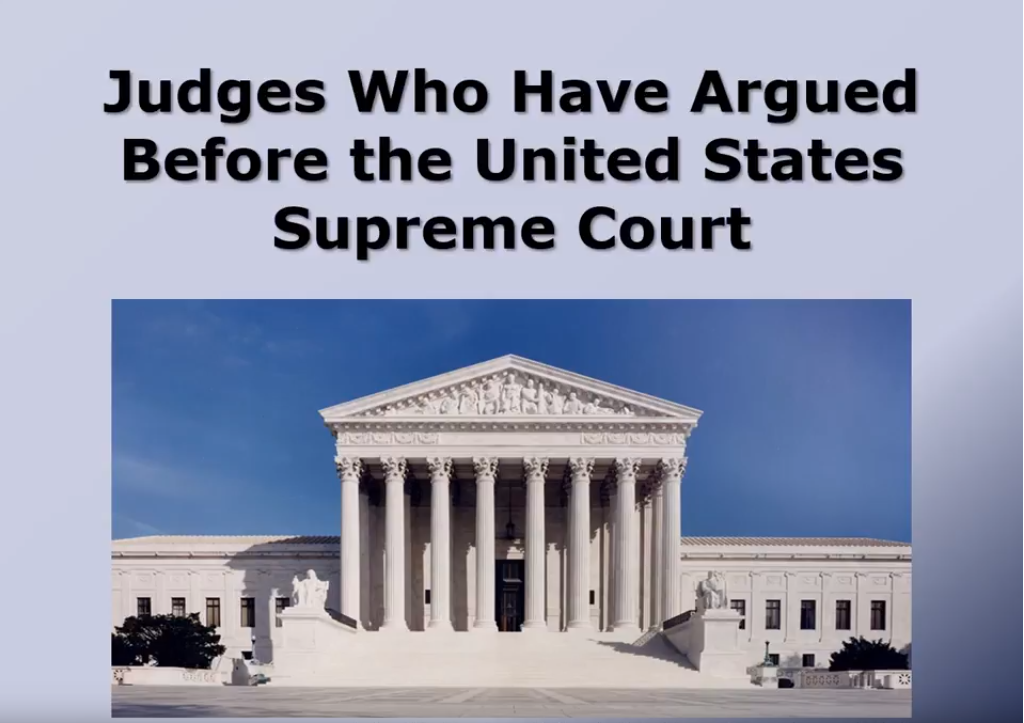 Six current Connecticut judges argued before the U.S. Supreme Court between 1981 and 1991. Their recollections of those arguments – prepared by Judge Jon Blue of the Connecticut Superior Court for the annual Connecticut Judges Institute – present a portrait of the justices at work in an earlier era.

Judge Julia DiCocco Dewey argued before the court in a Fifth Amendment case about the admissibility of a criminal defendant’s statements when she was about eight months pregnant. She remembers a marshal informing her that a nurse was waiting in the anteroom in case she went into labor. The first argument that day – in Wimberly v. Labor and Industrial Relations Commission of Missouri – happened to address a woman’s claim for unemployment benefits after she was not rehired following her pregnancy leave for lack of an open position. The advocate argued that “pregnancy was an emotional, physical, and mental disability that required preferential treatment,” and Dewey remembers the sense that all of the justices, especially Justice Sandra Day O’Connor, were looking at her throughout the argument. (O’Connor wrote an opinion in Wimberly holding that Congress in the Federal Unemployment Tax Act intended to prohibit states from singling out pregnancy for unfavorable treatment, not to mandate preferential treatment.)

Judge Robert Genuario, who lost the argument against Dewey when the justices ruled that the defendant had voluntarily waived his right to counsel and his statements were therefore admissible, recalls answering questions about the facts from O’Connor, who as second-most junior justice sat on the far left of the bench. He heard a “booming voice,” like “a chain around [his] neck,” “jerking him back to the righthand side of the room.” It was Justice Antonin Scalia, the most junior justice, demanding, “that’s not what happened, counsel, is it?” The argument “went downhill from there.”

Other memories are less reverent: Justice Potter Stewart, who had just quit smoking, chewing rubber bands during oral argument; or Chief Justice Warren Burger, who, rumored to ask at least one “dumb question” every argument, fulfilled that prediction during Little v. Streater, in Blue’s estimation.

The judges and their cases are as follows: