On the day that Judge Brett Kavanaugh returned to the Senate to fight for a seat on the Supreme Court, Justices Sonia Sotomayor and Elena Kagan each made a public appearance. Neither justice spoke substantively on the Kavanaugh hearings, of course. Rather, Kagan and Sotomayor promoted their visions of a more perfect union, reiterating familiar themes from their previous appearances: the value of open-mindedness and compromise for Kagan, and education as a path to success for Sotomayor.

At UCLA Law, Kagan declined to comment on the confirmation process (“I think given the events of today, that’s the one question I’m not going to answer,” the Associated Press quoted her as saying.). Kagan did talk about the current justices’ extensive efforts at consensus-building, according to the Daily Bruin. Perhaps presciently, she noted: “The court’s strength as an institution of American governance depends on people believing it has a certain kind of legitimacy–on people believing it’s not simply just an extension of politics, that its decision making has a kind of integrity to it. If people don’t believe that, they have no reason to accept what the court does.” 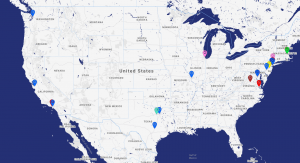 Promoting childhood literacy at Reading is Fundamental’s National Reading Coalition, Sotomayor stated: “Equality in America won’t come until we have equality in education.”

The September 27 appearance was the latest stop on Sotomayor’s extensive cross-country tour in support of her three new children’s books: “Turning Pages: My Life Story,” the Spanish-language “Pasando Páginas,” and a middle school readers’ version of her autobiography, “My Beloved World.” This month alone, Sotomayor also headlined the following events:

At the University of Washington event on September 9, Sotomayor spoke of the pleasure of hearing from readers who relate to her life story, including a certain colleague:

During the working term for the Court, none of us can read a book from beginning to end, because we’re kind of busy with other things. But Justice [Ruth Bader] Ginsburg read my book – a few chapters at a time, over a number of weeks – and virtually every Friday thereafter, she would come to me before conference started and say, “Sonia. I had a very similar experience.” And she did that every week, and it was so touching. That has been one of the most gratifying things of having written my biography: having people share how their lives are so similar to mine.

Later on, Sotomayor mentioned how she has learned to amplify Ginsburg at conference:

Justice Ginsburg, at one point, was asked about how she was treated on the Supreme Court. And was she treated any differently than men were treated. Her response was something like, well, the reality is that sometimes when I say things, people don’t hear me. How many women have had that feeling? So I thought about what she said, and one of the little things I do is when Justice Ginsburg says something, and then one of my male colleagues says it, and everybody says, what a smart idea — when it comes my turn, I look up and I say, “Ruth said that first.” But it shouldn’t just be me. Men in the room have an obligation to do the same thing.

As 1L year begins at law schools nationwide, Justice Elena Kagan returned to Harvard Law (where she had once served as dean) to dispense advice to first-years on August 30, while Ginsburg did the same for Georgetown 1Ls on September 26. At Harvard, Kagan shared the following insight on her relationships with her coworkers: “I think we like each other pretty well, and certainly respect each other, and certainly think that everybody is operating in good faith. That’s really important for the way the institution works.”

Despite disagreement among the justices, Kagan set out reasons why collegiality is essential on the job:

On the court, there are instrumental reasons for sure to get along with everybody and to maintain good relations with everybody because we’re all repeat players, and the person who you agree with today is not necessarily the person you agree with tomorrow, and the person you disagree with today, you’re going to want their agreement on something else tomorrow … But I think it’s more than instrumental, honestly. I think it’s a sort of an understanding, which maybe people develop more as they grow older. An understanding that you can think things are really serious and really important, but still – disagreement on those things does not mean the person who is on the opposite side is not a really decent, good person whom you will learn from, and … you will become a better person by being friends [with them].

Harvard Law Today carried a recap of the Kagan talk, and video is available on YouTube. Ginsburg’s Georgetown appearance was covered by Fortune and can be viewed on the law school’s Facebook page.

William & Mary Law School presented Kagan with the 2018 Marshall-Wythe Medallion on September 6. According to the school’s summary of the event, the award is given to “members of the legal community who have demonstrated exceptional accomplishment in law.”

Ginsburg was invited to speak about diversity in the legal profession at an September 12 lecture hosted by the National Asian Pacific American Bar Association and George Washington University Law School. Ginsburg recounted the difficulties she faced as a woman just starting out as a lawyer, and once again lamented the nature of Supreme Court confirmation hearings in this day and age. “The way it was, was right. The way it is, is wrong,” GW Law News quoted her as saying. “[My confirmation] was the way it should be instead of what it’s become, which is a highly partisan show. The Republicans move in lockstep, and so do the Democrats. I wish I could wave a magic wand and bring it back to the way it was.” Watch the full event on C-SPAN.

Also on September 12, Kagan made an appearance at the Hannah Senesh Community Day School in Brooklyn, where she once again extolled the virtues of dialogue and compromise. “You learn things when you open yourself up to different ideas, even ideas that seem foreign or crazy,” Kagan said, according to the Brooklyn Eagle.

Ginsburg participated in a conversation on opera at the University Club of Chicago on September 15. The following week, she delivered remarks at the United States Military Academy as part of the Zengerle Family Lecture Series in the Arts and Humanities. The U.S. Army provides coverage.

As opera is to Ginsburg, architecture is to Justice Stephen Breyer (who was named chair of the Pritzker Architecture Prize jury in August). On September 26, Breyer participated in an event honoring the 20th anniversary of the Moakley U.S. Courthouse in Boston, Massachusetts.

Three justices were feted by their alma maters on September 21: Steinert High School invited Justice Samuel Alito back for a ceremony renaming and dedicating its library in his honor (recap from The Trentonian), Hunter College bestowed an honorary degree on Kagan (video from CBS New York), and Columbia Law School hosted an event on impact litigation to commemorate Ginsburg’s 25th year on the Supreme Court. After the law school conversation, Ginsburg crossed College Walk to the Columbia Journalism School, where she was the surprise guest for a screening of the documentary “RBG.” The law school also hosted a private dinner for Ginsburg in Low Memorial Library that night, at which Kagan spoke. According to Columbia’s coverage, Ginsburg was “visibly moved by the evening.” “What can I say about it? I will remember it for the rest of my life,” she said. Additional coverage comes from the New York Law Journal.