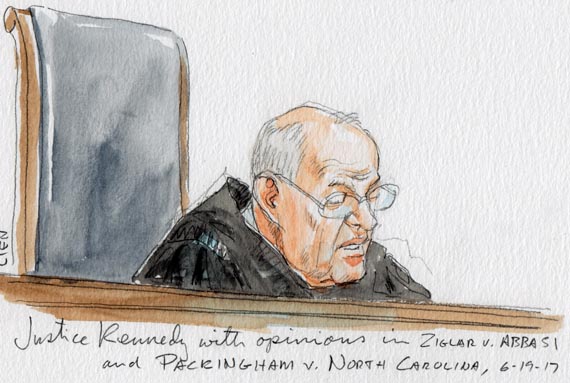 Erwin Chemerinsky is Dean and Jesse H. Choper Distinguished Professor of Law at the University of California, Berkeley School of Law.

Justice Anthony Kennedy will be remembered as a staunch advocate of freedom of speech, but his actual record is more complicated than that. Kennedy wrote the majority opinions, or joined them, in some of the most important cases protecting free speech in the last 30 years. Yet, he also wrote, or was part of, decisions limiting the free speech rights of government employees, students and prisoners. Perhaps the easiest way to summarize Kennedy’s free speech jurisprudence is that he generally was on the side of freedom of expression except when the institutional interests of the government were involved.

A strong protector of speech 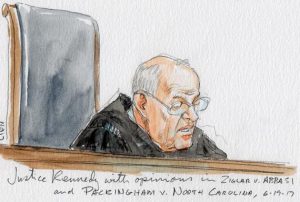 Kennedy also wrote important opinions protecting freedom of speech over the internet. A year ago, in Packingham v. North Carolina, he authored a majority opinion declaring unconstitutional a state law that prohibited registered sex offenders from being on social media sites where minors might be present. He wrote eloquently of the importance of the internet and social media for speech: “While in the past there may have been difficulty in identifying the most important places (in a spatial sense) for the exchange of views, today the answer is clear. It is cyberspace—the ‘vast democratic forums of the Internet’ in general, and social media in particular.”

Earlier, in 1997, he was part of the majority in Reno v. American Civil Liberties Union, which struck down key provisions of the Communications Decency Act of 1996, which restricted “indecent” speech over the internet. He wrote the opinion for the court declaring a subsequent statute, the Child Online Protection Act, to be unconstitutional, in 2004’s Ashcroft v. ACLU.

Apart from the opinions he wrote, he was part of the majority in many cases expanding free speech protections. For example, in the last week of this term, Kennedy joined the majority in holding that it violates the First Amendment for the government to require non-union members to pay the share of the union dues that supports the collective-bargaining activities of the union —  Janus v. American Federation, overruling 1977’s Abood v. Detroit Board of Education. Also, Kennedy was part of the majority in ruling, in National Institute of Family and Life Advocates v. Becerra, that a preliminary injunction should have been granted against a California law that required that reproductive healthcare facilities post notices informing women that the state would provide free and low-cost contraception and abortion to women who economically qualified and disclosing whether they were unlicensed to perform medical services. Like the campaign-finance decisions, these were 5-4 rulings split along ideological lines with Kennedy joining the conservative justices.

In other cases, though, Kennedy was in the majority in important free speech cases that were not ideologically divided. In Snyder v. Phelps, Kennedy in 2011 joined Chief Justice John Roberts’ majority opinion in an 8-1 decision holding that there cannot be civil liability for intentional infliction of emotional distress for speech protected by the First Amendment. Also that year, in Brown v. Entertainment Merchants, Kennedy joined Justice Antonin Scalia’s majority opinion to declare unconstitutional a state law that prohibited selling or renting violent video games to minors under 18 years old. Earlier he had been part of the majority in striking down laws restricting hate speech, such as cross-burning: Virginia v. Black (2003) and R.A.V. v. City of St. Paul (2002).

Kennedy sometimes dissented from decisions that upheld restrictions on speech. In Alexander v. United States, Kennedy in 1992 dissented from a court opinion that upheld the ability of the government to seize and destroy all of the assets of a business convicted of obscenity-law violations. In Florida Bar v. Went for It, Kennedy in 1995 wrote the dissent, joined by Justices John Paul Stevens, David Souter and Ruth Bader Ginsburg, and argued that a state law was unconstitutional in preventing lawyers from soliciting accident victims or their estates for a period of 30 days.

Deference to the interests of the government

But these cases painting Kennedy as a justice strongly supportive of free speech tell only part of the story. He also consistently was with the conservative justices in allowing restrictions on free speech when the institutional interests of the government were involved. For example, in 2006 Kennedy wrote the majority opinion in Garcetti v. Ceballos, which held that there is no First Amendment protection for the speech of government employees while on the job in the scope of their duties. This is a significant restriction on speech rights of public employees that has led to the dismissal of many cases in which they have claimed an infringement of free speech.

Kennedy joined Roberts’ 2007 majority opinion in Morse v. Frederick, which held that a school could punish a student for displaying a banner that was perceived as encouraging illegal drug use. Likewise, he joined Roberts’ 2010 majority opinion in Holder v. Humanitarian Law Project, which held that the government could punish speech as material support for terrorist activity if it was done in concert with a “foreign terrorist organization.” The court rejected the argument that the government had to prove that the speech met the legal test for incitement of illegal activity and show a likelihood of imminent harm. In Beard v. Banks, Kennedy joined an opinion by Justice Stephen Breyer rejecting a First Amendment challenge to a Pennsylvania law prohibiting prisoners in maximum-security facilities from having any printed material, including even family photographs.

One important Kennedy opinion pointing in the other direction was United States v. Alvarez, in which the court in 2012 declared unconstitutional the federal Stolen Valor Act, which made it a crime for a person to falsely claim to have received a military honor. In a powerful opinion for a plurality, Kennedy discussed the need for First Amendment protection for even false speech.

These, of course, are only some of the more prominent free speech cases decided in Kennedy’s more than 30 years on the Supreme Court. Yet a pattern emerges from them. Kennedy clearly saw himself as a strong advocate for freedom of speech and was part of many majorities protecting expression. Yet the overall record is more complicated, with Kennedy often voting in favor of the government and against free speech claims when the institutional interests of the government were involved.

Kennedy’s time on the court also saw a transformation in ideology with regard to speech. Traditionally, it has been liberals who have been the strong advocates for speech and conservatives who have supported regulation. This, for example, was the pattern when the court considered efforts by the government to restrict speech that it saw as advancing communism or when it came to obscenity and the First Amendment. Over the last 30 years, conservatives increasingly have taken a deregulatory approach to speech, as exemplified by their rulings to strike down campaign-finance regulations, while liberals at times have been more willing to allow restrictions to serve other important interests. Kennedy played a key role in this shift. Yet, it would be a serious mistake to ignore the areas in which the conservatives have sided with government regulations, particularly when the interests of the government have been at stake. And Kennedy was instrumental in these decisions as well.