Symposium: The elections clause as a structural constraint on partisan gerrymandering of Congress 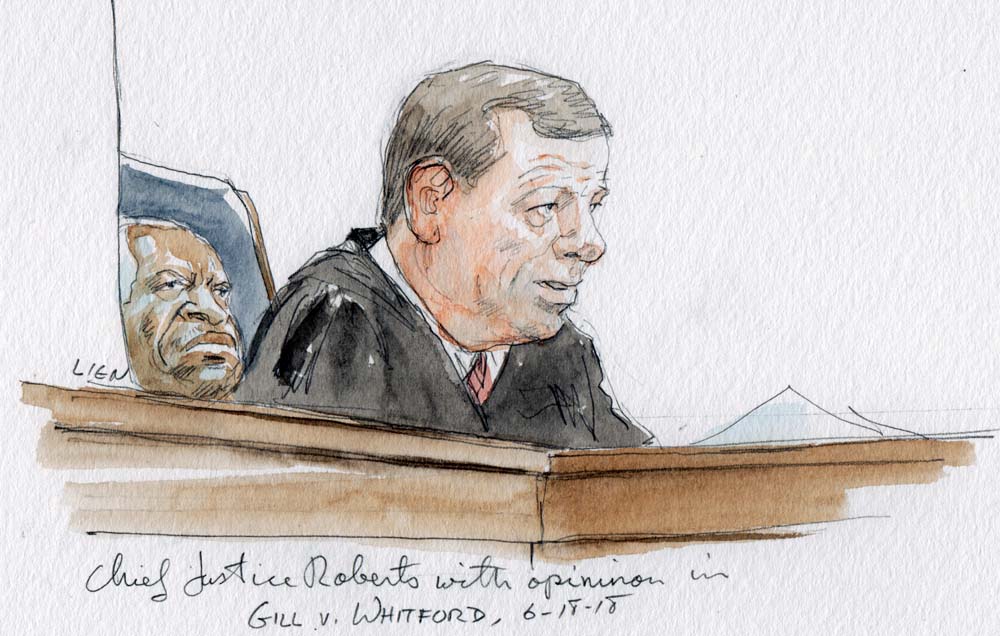 The Supreme Court has struggled between seeing itself as an institution that only vindicates individual rights and as one that vindicates, at times, more structural or group-based interests. Partisan gerrymandering or vote dilution is obviously intended to advantage or disadvantage adherents of one political party. This is intrinsically a group-based injury, as are all vote-dilution injuries.

In the racial-vote-dilution context under the 14th Amendment, for example, the Supreme Court recognized from its earliest cases, including 1973’s White v. Regester, that the constitutional injury occurs when districts are designed “to cancel out or minimize the voting strength of racial groups.” Similarly, when the court drew on the racial-vote-dilution cases to hold for the first time, in 1986’s Davis v. Bandemer, that partisan vote dilution could also violate the 14th Amendment, the court recognized that “the question is whether a particular group has been unconstitutionally denied its chance to effectively influence the political process.” It makes no sense, either practically or conceptually, to “dilute” the vote of any individual voter in isolation. Vote dilution, whether racial or partisan, is about diminishing the overall political power of groups as groups, compared to the power those groups would have in a lawful plan.

The tension between whether the Supreme Court is limited to vindicating only individual rights and whether it sometimes vindicates group-based injuries is at the heart of the conflict – and it is real conflict — between Chief Justice John Roberts’ majority opinion and Justice Elena Kagan’s four-justice concurrence in Gill v. Whitford.

To the chief justice the problem with the plaintiffs’ vote-dilution case is that it “is a case about group political interests, not individual legal rights.” But every case about vote dilution, racial or political, is necessarily a case about group political interests. Roberts quickly built upon that statement to add the following one: “The Court’s constitutionally prescribed role is to vindicate the individual rights of the people appearing before it.” That is true when we are talking, for example, about the right of each and every eligible voter to get to the ballot box or the freedom of expression. But Gill was a partisan-vote-dilution claim. And again, if partisan vote dilution is actionable, it is because the political power of one party’s supporters, as members of that group, is being unlawfully undermined. Nonetheless, having pushed partisan-vote-dilution claims into this individual-rights framework, Roberts’ opinion then was able to reject the concept of a statewide vote-dilution challenge by individual voters to a redistricting plan. Instead, plaintiffs will have to go district by district to establish partisan vote dilution.

Kagan’s concurrence chose not to take direct issue with this analysis. Yet she still thought it important to vindicate a group-based way of understanding the constitutional harm of partisan gerrymandering. She turned to the freedom of association, under the First Amendment, to do so. Freedom of association stands midway between individual rights and group rights – it protects the right of individuals to band together into groups, including for effective political action. Political parties – groups – have rights of association. Because a political party has a statewide existence, the injuries to it can exist on a statewide basis, and hence political parties, along with perhaps others, can challenge a redistricting plan on a statewide basis.

There is yet another constitutional provision, not at issue in Gill, that even more naturally moves constitutional analysis away from individual rights to a focus on the statewide effects of partisan gerrymandering, at least when it comes to congressional districts. That is the elections clause of the Constitution, Article I, Section 4. The elections clause delegates power to state legislatures, in the first instance, to establish the “times, places and manner” of congressional elections.

Like the powers of Congress in Article I, the elections clause is a specifically enumerated power that the Constitution grants to states, initially, for specific and limited purposes. The Supreme Court has made clear that the states have no reserved or inherent powers over the regulation and design of congressional districts. Their power to design congressional districts stems only from this enumerated grant and cannot go beyond the scope of that grant.

In recent decades, the Supreme Court has seen the enforcement of limits on enumerated grants of power – typically to Congress – as central to the court’s role. The court has ensured in many cases that Congress’ powers are limited to the scope and aims for which the Constitution specifically enumerates the grant of particular power. That is the basis for decisions like 1995’s United States v. Lopez, about Congress’ Article I powers, and for cases like 2001’s Board of Trustees v. Garrett, 2000’s United States v. Morrison, and 1997’s City of Boerne v. Flores, about Congress’ 14th and 15th Amendment powers. As these cases indicate, the modern court has considered it an essential aspect of the judicial role to enforce the limits on enumerated grants of power. When the court does so, it is not enforcing individual rights. It is enforcing structural limits on the power of Congress.

The same principle applies to state power under the elections clause. The Supreme Court has already recognized this principle. In several cases, the court has struck down state laws that regulate congressional elections as being beyond the implicit boundaries on state power under the elections clause. In the U.S. Term Limits Inc. v. Thornton case, for example, the court noted that, “the Framers understood the Elections Clause as a grant of authority to issue procedural regulations, and not as a source of power to dictate electoral outcomes, to favor or disfavor a class of candidates, or to evade important constitutional constraints.” This was part of the basis for the court’s holding that term limits for members of Congress are unconstitutional. Similarly, the court struck down state ballot-notation measures in Cook v. Gralike, relying on the fact that, as Justice Anthony Kennedy noted in concurrence, the “Elections Clause thus delegates but limited power over federal elections to the States.” The court concluded that ballot notation, which indicated whether a candidate had pledged to support term limits, was designed to “favor candidates” who took certain positions. This was beyond a state’s legitimate authority under the elections clause.

Because the Supreme Court has already held that states cannot use their power under the elections clause to “favor or disfavor a class of candidates,” the elections clause might be thought a natural home for statewide challenges to partisan gerrymandering of congressional districts. I filed an amicus brief in the 2006 case of League of United Latin American Citizens v. Perry, in which I made this argument on behalf of myself and my colleagues with election-law expertise, Sam Issacharoff and Burt Neuborne. Jamal Greene has an excellent student Note that develops the argument in much more detail.

So far, the elections clause has not been the focus of sustained attention in any of the Supreme Court’s partisan-gerrymandering decisions. But that is about to change. The three-judge federal court that struck down North Carolina’s 2016 congressional districting plan held that partisan gerrymanders of Congress do indeed violate the elections clause, as well as the First and 14th Amendments. That case is currently under submission to the Supreme Court, and it is likely to represent the court’s next major confrontation with defining the kind of constitutional injury that partisan gerrymandering entails.