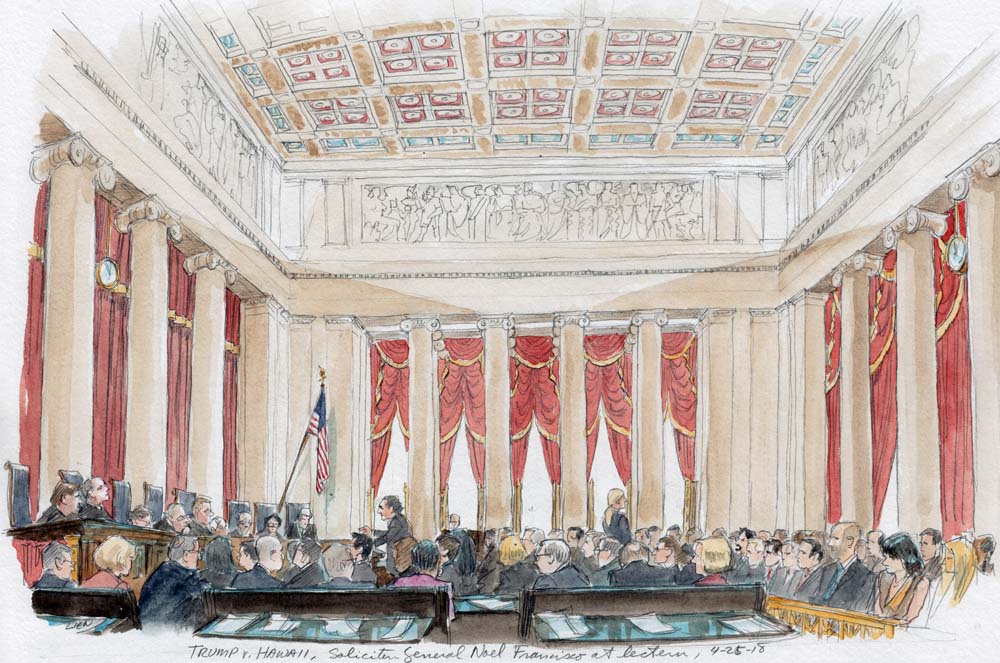 John Eastman is the Henry Salvatori Professor of Law & Community Service at Chapman University’s Fowler School of Law. He is also a senior fellow and director of the Center for Constitutional Jurisprudence at the Claremont Institute, on whose behalf he filed an amicus curiae brief in support of the federal government’s position in Trump v. Hawaii.

Way back in February 2017, in the wake of the decision of the U.S. Court of Appeals for the 9th Circuit upholding a nationwide injunction against the first of President Donald Trump’s travel-ban executive orders, I wrote in The Hill newspaper that the 9th Circuit’s decision, which did not even bother to cite the relevant statutory authority, amounted to a judicial coup d’état, part of a concerted effort to deprive Trump (and hence the electorate who voted for him) of the authority of his office. Then, after several of the 9th Circuit’s preliminary rulings enjoining the president were blocked by the Supreme Court, I published another piece, this time in the Los Angeles and San Francisco Daily Journals, outlining the paucity of legal support for the lower-court decisions blocking the president’s clearly constitutional and statutorily authorized actions. And I predicted at the time that the 9th Circuit’s decision in the latest round would also be rebuffed. And now it has been.

This should come as no surprise. The law could not be more clear. Section 1182(f) of the Immigration and Nationality Act authorizes the president to “suspend the entry of all aliens or any class of aliens” whenever he “finds” that their entry “would be detrimental to the interests of the United States.” Every president since that law was enacted in 1952 has exercised the authority conveyed by it, without serious challenge. One—President Jimmy Carter in 1979—exercised it against Iran, one of the very same countries covered by Trump’s executive order. Indeed, given the role the nation’s chief executive has in protecting the nation from foreign threats, it is very likely that the president could exercise such authority even in the absence of the federal statute. The president has “plenary and exclusive power … as the sole organ of the federal government in the field of international relations,” the Supreme Court noted more than 80 years ago in the case of United States v. Curtiss-Wright Export Corp. And that power “does not require as a basis for its exercise an act of Congress.”

Today, the Supreme Court gave effect to the textual clarity of the statute, holding that “[b]y its plain language, §1182(f) grants the President broad discretion to suspend the entry of aliens into the United States.” The court then systematically dismantled each of the specious arguments offered by the plaintiffs—and too readily accepted by the courts below—that the plain language does not mean what it says.

The statutory requirement of presidential “finding” was easily met, held the court, because the “12-page Proclamation—which thoroughly describes the process, agency evaluations, and recommendations underlying the President’s chosen restrictions—is more detailed than any prior order a President has issued under §1182(f),” including President Bill Clinton’s one-sentence order suspending entry of members of the Sudanese government and armed forces. Second, although the court agreed that the statutory term “suspend” often connotes a deferral until later, it held that the word did not require this president to announce ahead of time a fixed end date to the suspension, any more than President Barack Obama’s (or any other prior president’s) indefinite suspensions needed to have a precise end date. And the third restriction plaintiffs sought to tease out from the text—that “any class of aliens” could not cover nationality—was equally dismissed. “The word ‘class’ comfortably encompasses a group of people linked by nationality,” said the court, particularly when the statutory text itself allows the president to suspend the entry of “all aliens.”

The court then rebuffed the plaintiffs’ attempts to use the legislative history to counter the clear meaning of the law. Rightly recognizing that resort to legislative history is inappropriate when the law is unambiguous, the court also noted that the legislative history demonstrated that the law’s delegation of authority to the president was not limited to emergency situations. And it rejected the plaintiffs’ claim that the ban on national origin discrimination in the issuance of visas—a procedure that is undertaken by consular officers abroad—must circumscribe the president’s authority under Section 1182(f). The two statutes operate in different spheres, the court correctly noted. The issuance of a visa is not the same thing as admission onto U.S. soil. Indeed, even those with a visa in hand are not guaranteed admission.

The specious statutory arguments thoroughly rebuffed, the court turned next to the claim that the president’s suspension of entry of nationals from several majority-Muslim countries (as well as a couple of countries that are decidedly non-Muslim—North Korea and Venezuela) amounted to an unconstitutional establishment of religion, based in large part on tweets the president had sent during the presidential campaign. Although Chief Justice John Roberts, who wrote the majority opinion, and Justice Anthony Kennedy, who wrote a concurrence, clearly offered no quarter to those prior statements, the proclamation was itself facially neutral and bona fide, and that ended the matter. To hold otherwise would result in the extraordinary claim, offered by one of the lower courts, that the exact same action taken by any other president would be constitutional, while only the actions of this president are unconstitutional. That is a very odd notion of the rule of law.

But note. The case is not over. The Supreme Court merely reversed the nationwide injunction that had been issued by the lower court. The case will now be back on remand, and it remains to be seen whether the 9th Circuit and the district courts within its geographic jurisdiction will heed the message. After all, this is now the fourth time that the Supreme Court has rejected their orders blocking the president from exercising the powers of the office to which he was elected, on a matter that was a central issue in the presidential campaign of 2016. Once more, and the 9th Circuit will surpass its own record of ignoring governing Supreme Court authority on the same case—the prior mark having been set by the late Harry Pregerson, who kept issuing last-minute stays of execution (contrary to Supreme Court rulings) in order to block the execution of convicted murderer Robert Alton Harris until the Supreme Court took the extraordinary step of barring the 9th Circuit from further jurisdiction over the matter. Let’s hope that the rule of law fares better on remand this go-around.