Shoba Sivaprasad Wadhia is the Samuel Weiss Faculty Scholar and founding director of the Center for Immigrants’ Rights Clinic at Penn State Law. She co-authored an amicus brief for scholars of immigration law on the history of the Immigration and Nationality Act in support of Hawaii in Trump v. Hawaii. 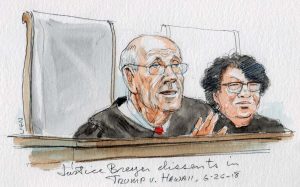 Coming to this case as an immigration-law professor and attorney, I will focus here on the role of the immigration statute in today’s outcome and the human impact the ban has already had on thousands of individuals and their families. My own view is that the majority misunderstands the history and text of the immigration statute and sidesteps the human impact the ban will continue to have on people who are legally qualified to come to the United States but shunned for no other reason than where they were born.

As background, the proclamation (Travel Ban 3.0) was created by President Donald Trump after two earlier versions issued as executive orders were challenged successfully in court and then either were revoked or expired. In all three versions the president relied on a section of the immigration statute known as Section 1182(f), which allows a president to suspend the entry of any noncitizen or class of noncitizens for such period as he shall deem necessary “[w]henever the President finds that the entry of any aliens or of any class of aliens into the United States would be detrimental to the interests of the United States.” The latest iteration of the ban prevents certain nationals from Libya, Yemen, Iran, North Korea, Syria and Somalia (and certain visitors from Venezuela) from receiving a visa and entering the United States. Travel Ban 3.0 contains certain exemptions and also a waiver scheme for those who can show “undue hardship” and other factors, but the reality on the ground is that the waiver process is opaque if not broken.

The immigration statute is known as the Immigration and Nationality Act and was passed by Congress in 1952. The statute includes a structure for individuals in qualifying relationships and categories to seek admission to the United States. The statute also includes sections outlining who may be ineligible for admission and the standard for seeking a waiver of inadmissibility. When Congress amended the statute in 1965, it removed the national-origin-based quotas and created a nondiscrimination clause in Section 1152(a) to underscore that “no person shall receive any preference or priority or be discriminated against in the issuance of an immigrant visa because of the person’s race, sex, nationality, place of birth, or place of residence.”

Today, the Supreme Court stated that the plain language of Section 1182(f) “exudes deference to the President in every clause.” The court found that the Department of Homeland Security had fulfilled the “sole prerequisite” of the statute that the entry of the covered nationals “would be detrimental to the interests of the United States.” To support its conclusion, the court showcased the 12-page proclamation, cited to all of its details and concluded that the “Proclamation does not exceed any textual limit on the President’s authority.” Unlike the court, I remain unpersuaded that the president had sufficient and valid information from which to conclude that nationals from seven countries met this prerequisite.

Another statutory question analyzed by the court was the relationship between Section 1182(f) and the immigration statute as a whole. As a group of distinguished immigration-law scholars explained in an amicus brief, Travel Ban 3.0 exceeds the scope of Congress’ delegation to the president. The court distinguished the overall level of reliable information about visa applicants from specific consular decisions to grant or deny a visa, concluding that Travel Ban 3.0 “supplements” rather than “supplants” the INA. In my view, refusing visas and entry to nationals from whole countries clashes with the individual decisions made by consular officers about a person’s admissibility. The court also called the plaintiff’s reading of Section 1182(f) “remarkably cramped” and concluded that a fair reading of the statutes would enable the president to impose additional restrictions on entry beyond the ground set in the INA. I cannot agree. Unlike the court, I believe that Section 1182(f) cannot be read in isolation from the legislative history and the INA’s designation of family reunification as Congress’ “foremost” priority.

Finally, the court rejected the plaintiffs’ argument that the nondiscrimination clause in Section 1152(a) cabins the authority of the president to exclude nationals from whole countries (the majority of which have Muslim populations of more than 90 percent). The court aligned with the government’s position that the language of “entry” in Section 1182(f) is distinguishable from the “visa issuance” process covered by Section 1152(a). This mechanical point promotes a distinction without a difference. As a practical matter, those covered by Travel Ban 3.0 are refused visas. Blinking that reality only ushers in what Congress feared: a de facto national-origin quota system like the quotas that Congress decisively rejected when it reshaped immigration law in 1965.

The human impact of Travel Ban 3.0 cannot be overstated. The ban has been in full effect since December 4, 2017, because of written orders by the Supreme Court. Well before today’s ruling, America has already witnessed devastating consequences, including hundreds of families separated. Iranian parents have lost the opportunity to visit the United States to see their child graduate. Syrian students courted by a university for years have missed the chance to obtain a visa and study in the United States. Yemeni husbands have been stranded in Djibouti unable to reunite with their American wives and children in the United States because of a civil war in Yemen and refusal by a consulate to issue a visa. I have personally witnessed each of these scenarios in my work, and the feeling has been nothing short of heartbreak. If there is a silver lining to be found in today’s decision, it is a deep admiration for the quality of lawyering by the plaintiffs’ counsel and the incredible solidarity and resilience among Muslim, Arab and South Asian communities most impacted by today’s ruling.