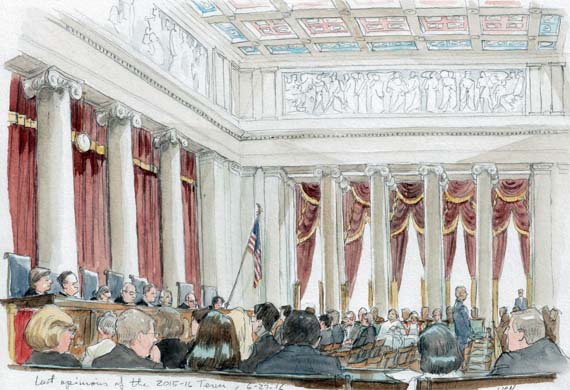 Wide-shot of courtroom on last day of opinions, 2015-16 Term
Share

Gillian Metzger is the Stanley H. Fuld Professor of Law at Columbia Law School. She was part of an amicus brief of constitutional and administrative law scholars in support of the SEC in Lucia v. Securities and Exchange Commission.

As the gangbuster 2017 term draws to a close, we now have another year’s worth of cases to study for signals about where the Roberts court is headed on administrative law.  Recent terms have evidenced growing attacks on the administrative state and plaintive complaints about uncontrolled bureaucrats from the court’s conservative wing.  Yet to date these attacks have been marked by strong rhetorical bark but limited practical bite.  The court has opted for incremental doctrinal pullback at most, with more radical constitutional constraints on administrative governance relegated to concurrences and dissents.

That trend continued this term, with the court demonstrating admirable judicial agility at ducking or minimally deciding constitutional challenges to the administrative state.  This is true of both Oil States Energy Services. v. Greene’s Energy Group and Lucia v. SEC, the two head-on constitutional challenges to administrative adjudication.  The court also largely avoided debates over the status of Chevron and Auer deference.  Yet the 2017 term decisions also contain seeds of more dramatic constitutional limits on administrative governance, were the Roberts court inclined to move in that direction in the future.

Oil States involved an Article III and Seventh Amendment challenge to inter partes review, a form of administrative review of granted patents.  The court, in a majority opinion written by Justice Clarence Thomas, sustained the constitutionality of inter partes review over a dissent, written by Justice Neil Gorsuch and joined by the chief justice, which argued strenuously that the arrangement violated Article III.  Yet in truth the analytic differences between majority and dissent were minimal.  Thomas’ majority opinion held that grant of a patent fell into the public-rights category for which Article III adjudication was not constitutionally required, and therefore its reconsideration did too.  Gorsuch insisted that, once granted, a patent represented a private right that could only be revoked by a court.  Strikingly, however, both the majority and dissent agreed that the constitutionality of inter partes review turned on this question of whether a public or private right was at issue.  Moreover, both the majority and dissent emphasized original understandings of patent revocation in reaching their determinations about whether a public or private right was at issue; they simply read the relevant history differently.  And the majority also grounded its finding of a public right on the questionable assertion that the government was a party, pointedly not invoking the modern definition of public rights as including rights that are closely intertwined in a regulatory schemes.

In short, Oil States’ analysis could portend significant curtailment of administrative adjudication, but need not.  After all, the court actually sustained the inter partes regime and could be seen as simply deciding the case on established doctrinal grounds.  Lucia shares similar ambiguity about its import, albeit with more signals that the court is unwilling to destabilize administrative government too much.  At issue in Lucia was whether administrative law judges at the Securities and Exchange Commission are inferior officers for purposes of the appointments clause.  In a majority opinion for six justices penned by Justice Elena Kagan, the court held that they are.  The majority ruled that the case was governed by the court’s earlier decision in Freytag v. Commissioner, which had found special tax judges to be inferior officers.

In contrast to Oil States, Lucia overturned the administrative adjudication at issue.  But it did so on about the narrowest grounds available.  Although potentially distinguishable, the Freytag decision was closely on point.  More importantly, the majority adhered to the established doctrinal requirement that inferior officers must wield significant authority, rejecting the view that any government official performing an ongoing statutory duty, no matter how minor, is an inferior officer.  That view garnered only the support of Thomas and Gorsuch, who argued that it represented the original public meaning of “Officers of the United States.”  This definition of officer would result in a vast number of what had been presumed to be federal employees suddenly being reclassed as inferior officers—and likely improperly appointed inferior officers at that.  The other justices showed no appetite for asserting such a destabilizing and debatable originalist understanding over the court’s own precedent.  And the majority further limited the disruptive effects of its decision by signaling that only individuals who raised appointment challenges in their ALJ adjudications are entitled to relief, thereby ensuring that the decision would not call into question all administrative adjudications by non-constitutionally appointed ALJs.

That said, Lucia is not without impact.  The court’s emphasis on the significant powers of ALJs to shape the adjudicative record, regulate proceedings, and issue potentially final decisions raises questions about other instances of administrative adjudication—Social Security Agency adjudications being a prime example—when administrative judges may not have been appointed by an agency head.  More importantly, now that ALJs are deemed inferior officers, the strong removal protection enjoyed by ALJs at independent agencies becomes ripe for challenge as a form of the double-for-cause removal protection held unconstitutional in Free Enterprise Fund v. PCAOB.  No justice other than Breyer thought the court should reach the removal issue—appropriately so, as this issue had not been briefed or addressed by the court of appeals.  But Breyer is surely right that this double-for-cause challenge will be immediately forthcoming.  If nothing else, the majority’s refusal in Lucia to provide clearer guidance on what counts as an inferior officer—and its willingness to consider the functional authority an official wields in practice, in addition to the official’s formal powers—leaves the door open to similar appointments clause challenges in the future.  Indeed, the majority acknowledged outright that creating incentives for bringing such challenges was its goal.

Finally, there is the question of Chevron and Auer deference doctrines.  The focus of constitutional attack by conservative justices in the past, these doctrines might have been expected to have hit the chopping block with the addition of Gorsuch.  Gorsuch made his antipathy to Chevron well-known while sitting on the U.S. Court of Appeals for the 10th Circuit, and his pointed reference this term to “whether Chevron should remain” suggests his views haven’t changed.  That the court didn’t reach that question is a testament to its impressive ability to “simple ignor[e] Chevron” when it wants to—a complaint Justice Samuel Alito voiced in Pereira v. Sessions.  Even Breyer, one of the justices most willing to defer to administrative determinations, characterized Chevron as simply “a rule of thumb.”

Yet the most significant statement on Chevron this term came in Justice Anthony Kennedy’s concurrence in Pereira. There, Kennedy noted his concern with how Chevron “has come to be understood and applied,” with lower courts in his view too quick to find statutes ambiguous and “reflexively defer[]” to agency interpretations.  Given the Roberts court’s stare decisis leanings, full-scale rejection of Chevron seems unlikely.  But Kennedy’s concurrence, notable also for its citation of opinions raising constitutional challenges to Chevron, signals that more incremental pullbacks may well be in the offing.

So where does the 2017 term leave the administrative state?  Measured by bottom-line results, it emerges only minimally curtailed.  Measured by potential implications, its status is pending.