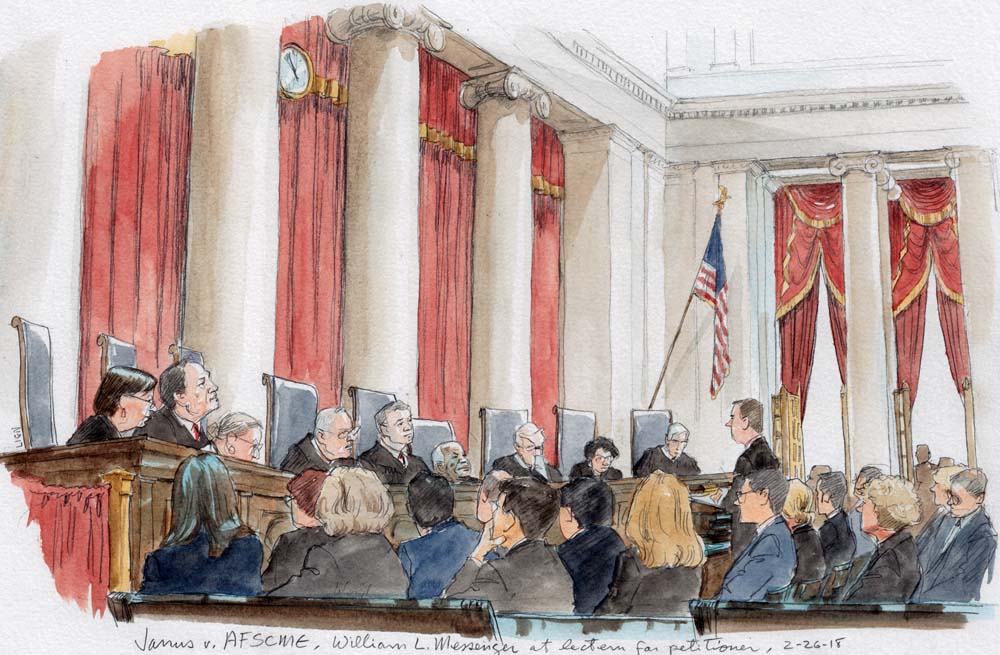 Matthew Forys is the chief of staff at Landmark Legal Foundation, which filed an amicus brief in support of Mark Janus in Janus v. AFSCME.

The Supreme Court upheld the free speech rights of state and local public-sector workers in Janus v. American Federation of State, County, and Municipal Employees and overruled an anomaly in its First Amendment jurisprudence: 1977’s Abood v. Detroit Board of Education. At issue in Janus was whether state government workers who don’t want to join the union representing them could nevertheless be forced to pay fees to support the union under a union security agreement. These objecting workers, known as “agency-fee payers,” were thus compelled to subsidize a group whose ideas they oppose as a condition of employment. Under Abood, the First Amendment rights of agency-fee payers were only impinged to the extent that the fees were used by the union for political or ideological activities not germane to collective bargaining. Today, the Court overruled Abood and held that compelling nonmembers to subsidize private speech on matters of substantial public concern violates their free speech rights. This ruling is not a surprise after Justice Samuel Alito’s sharp criticism of Abood in Knox v. SEIU (2012) and Harris v. Quinn (2014).

The issues in Abood and Janus stem from the congressional response to tumultuous labor disputes occurring in the late 19th and early 20th centuries. Strikes shook the country with shocking levels of violence. The Great Railway Strike of 1921 involved 400,000 workers and resulted in multiple deaths, sabotage and kidnapping. It also helped spur passage of the Railway Labor Act of 1926. The RLA granted collective-bargaining rights to railroad workers to prevent disruption of interstate commerce caused by labor disputes. It was later amended to address the issue of “free riders” – nonunion workers who received the benefits of union representation but didn’t want to pay for them. The solution was to allow “union shop” security agreements that require union membership as a condition of employment.

After more labor strife in the depths of the Depression, Congress passed the National Labor Relations Act in 1935 to promote labor peace and to equalize bargaining power between workers and employers. The NLRA granted collective-bargaining rights to most private-sector, but not government, workers. The Taft-Hartley Act amended the NRLA in 1947. It implicitly allowed “agency shop” clauses that require payment of fees from all employees, but not union membership. It also allowed states to pass “right-to-work” laws that ban union security agreements. Sixteen states did so within 10 years, and there are 28 now. States did not begin granting collective-bargaining rights to public sector workers, however, until 1959. Many states used the NLRA as a model, but there is significant variance in their scope. In right-to-work states, unions may be the exclusive representatives of workers, but can’t compel financial support from objectors. Thus, a regulatory patchwork over union security agreements developed in the states.

Union security agreements were challenged in two major RLA cases. In Railway Employees Department v. Hanson, the Supreme Court in 1956 upheld union shop agreements, stating: “Industrial peace along the arteries of commerce is a legitimate objective.” No First Amendment violation was found because the only conditions were payment of dues, fees and assessments, but “assessments … not germane to collective bargaining” would present “a different problem.” Five years later, in International Association of Machinists v. Street, the court held that the RLA did not allow unions to use objecting workers’ money on political activity that they opposed. Unfortunately, the boundaries of what is germane or political were difficult to draw and plagued the Supreme Court for years.

The Abood court relied on these cases to uphold an agency-shop arrangement arising from Michigan state law, stating that “the desirability of labor peace is no less important in the public sector, nor is the risk of ‘free riders’ any smaller.” Justice Potter Stewart’s opinion in Abood failed to subject the infringement of the objecting teachers’ First Amendment rights to strict scrutiny. The Abood court applied private sector RLA precedents to the public-sector union context and, at least with regard to the collection of fees, did so “without any focused analysis.” The court failed to appreciate the distinctions between private-sector and public-sector unions, such as the inherently political nature of collective bargaining with the government. The personal interests at stake are different when discussing wages, pensions and benefits in the public and private-sector contexts.

Contrary to Justice Elena Kagan’s claim, Alito’s opinion does not “weaponize” the First Amendment. It strengthens it by protecting the free speech rights of a political minority. The NLRA was justified by the need to equalize the bargaining power between labor and employer. Even the ultraconservative Chief Justice William Howard Taft wrote: “Union was essential to give laborers opportunity to deal on equality with their employer.” But the objecting schoolteacher has had greatly unequal bargaining power with the union over the payment of fees. Under Chicago Teachers Union v. Hudson, unions must determine agency fees based on an audit of their prior year’s expenditures and give the nonmembers a financial notice explaining how the fee was calculated. The example given in Illinois shows how objectors are left in the dark about the final numbers.

The national consensus is breaking down on many policy issues, so one can expect more challenges to compelled speech in which Janus will be cited, even though it arises out of the public-sector context. The free speech implications of Masterpiece Cakeshop v. Colorado Civil Rights Commission remain to be fully fleshed out and there are florists, bakers and dressmakers on the left and the right who don’t want to be compelled to support ideas they dislike. At the time of this writing, a petition for certiorari is pending before the court, Fleck v. Wetch, that challenges the compelled speech of mandatory bar dues. This issue was raised and immediately dismissed by Justice William Douglas in Hanson but looks different today. Janus will certainly be a check on mandatory bar associations interested in staking out policy positions too removed from the regulation of the legal profession.

The practical effect of Janus on public-sector unions will be significant. According to the Mackinac Center, they may lose three million union members and agency-fee payers and perhaps hundreds of millions of dollars in dues or fees. Several union-friendly states anticipated a loss in Janus and have already crafted measures to ameliorate the damage. New York, New Jersey and Washington have made union recruiting easier. Unions will have access to new employees’ personal contact information in New York and New Jersey and union representatives will be allowed to meet new hires for recruitment pitches during work hours in all three states. Maryland may soon follow suit. New York also enacted a state tax deduction for union dues. Before Janus was issued, some suggested a more radical approach: devising a way to have the government reimburse the costs of union representation.

The more interesting question is how labor will address the statutory right of exclusive representation now that agency fees have been struck down. It is clear that Alito thinks in the long term and today he hinted that exclusive representation is an avenue for future challenge: “Designating a union as the employees’ exclusive representative substantially restricts the rights of individual employees.” Unions have argued that the right to speak on behalf of all workers in a bargaining unit, not just union members, is an expensive burden that justifies compelling free riders to contribute funds. This right brings a corresponding duty of fair representation, requiring unions to represent the interests of all employees, even nonmembers, without discrimination. Now that one leg of this stool has been removed, unions will re-evaluate whether to keep working on behalf of objectors during collective bargaining and the grievance process or let them fend for themselves.

There will be disruption in the workplace in the short term. There may be multiple unions in a public-sector office. Some unions may try to bring back the right to strike to be effective and gain support. Alito’s opinion requires clear and affirmative consent before money can be taken from nonmembers but is short on details for how that works for existing agreements and what happens next. In the long term, though, unions will be forced to compete for support and all workers’ freedom of speech will be protected. Today’s opinion upholds the Jeffersonian ideal that it is “sinful and tyrannical” to compel someone “to furnish contributions of money for the propagation of opinions which he disbelieves and abhors.”