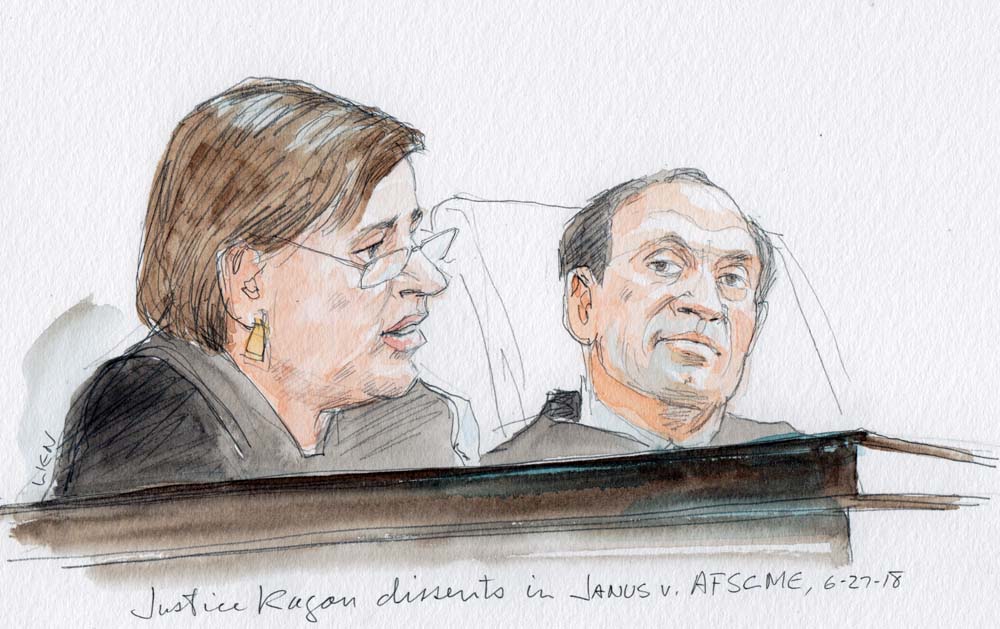 Toby Heytens is the solicitor general of Virginia, which joined 19 other states and the District of Columbia in an amicus brief supporting the union in Janus v. American Federation of State County, and Municipal Employees, Council 31. [Note: The views stated herein are those of the author alone and are not attributable to the attorney general of Virginia or the commonwealth of Virginia.]

This case was never — or never should have been — about whether mandatory public-sector union fees are a good idea or wise policy. In fact, my own state (the commonwealth of Virginia) has had a right-to-work law on the books for more than 70 years that prohibits precisely the sort of fees whose constitutionality was challenged in Janus v. American Federation of State, County, and Municipal Employees, Council 31.

Instead, Janus was a case about who should make those decisions and when it is appropriate for a court to overrule one of its own longstanding decisions. More than 40 years ago (when I was a toddler), the Supreme Court held that the federal Constitution permits — but does not, of course, require — states to adopt for their own employees a form of collective bargaining that is now widely used in the public sector. The court emphasized that its job was “not to judge the wisdom of Michigan’s decision to authorize the agency shop in public employment.” Rather, it was simply to decide whether the federal Constitution permitted each state to create its own labor-relations system that took into account the state’s unique characteristics, its economy and the needs and interests of its government, citizens and employees. Abood v. Detroit Board of Education was, in short, a case about federalism and judicial restraint.

The same cannot be said of the Supreme Court’s decision today in Janus. Instead, Janus holds that the federal Constitution requires a one-size-fits-all approach for every state and subjects state employers to a novel constitutional rule that does not (at least for now) apply to private-sector employers and unions. As Justice Elena Kagan explained in dissent, this decision “will have large-scale consequences” for state and local governments, public sector unions and employees, particularly in the more than 20 states that “have statutory schemes built on” the court’s now-overruled decision in Abood. Janus invalidates long-standing contractual arrangements “covering millions of workers” — including police officers, firefighters, teachers and transportation and sanitation workers — and will severely undermine the ability of public-sector unions to provide protection, benefits and fair pay to working people.

Janus also deepens concerns about the Roberts court’s attitude towards precedent and underscores the importance of judicial appointments. A little more than a decade ago, dissenting in a case holding that local school districts were powerless to remedy the effects of residential segregation, Justice John Paul Stevens wrote that it was his “firm conviction that no Member of the Court that I joined in 1975 would have agreed with today’s decision.” Other Roberts court cases have invalidated part of the then nearly 50-year-old Voting Rights Act (Shelby County v. Holder), and overruled earlier decisions involving antitrust (Leegin Creative Leather Products, Inc. v. PSKS, Inc.) and, of course, campaign finance (Citizens United v. Federal Election Commission). (It is perhaps telling that Citizens United is cited seven times in Justice Samuel Alito’s opinion for the court in Janus.)

Those decisions all have something in common with each other and with Janus: Every single one of them was decided by a vote of 5-4. In each of the previous decisions, Justice Antonin Scalia voted with the five-justice majority, and, when Scalia died suddenly in February 2016, the court had just heard oral argument in a different case in which (as in Janus) it had also been asked to overrule Abood. Based on Scalia’s comments at oral argument, it seems nearly certain that he would have provided the fifth vote to do so. After his death, however, the court split 4-4, so the judgment of the lower court was affirmed. What Kagan aptly calls the “6-year crusade” to reverse Abood and “ban agency fees” had stalled.

Today, however, the Supreme Court is back to nine justices. And in Janus, Scalia’s successor — Justice Neil Gorsuch — cast the fifth vote to overrule Abood. Based on what we had seen so far, that vote is not terribly surprising. But the outcome in Janus — as well as the court’s recent decision in Epic Systems Corp. v. Lewis, in which Gorsuch cast the deciding vote and wrote the court’s 5-4 decision that will severely limit workers’ ability to seek damages from their employers for violations of federal law — only underscores the significance of his appointment. That appointment, of course, was possible only because of the unprecedented obstruction that prevented President Barack Obama from naming Scalia’s successor and the sharply contested election that then enabled President Donald Trump to do so. Although it is still early, it appears that the consequences of Gorsuch’s appointment may be every bit as dramatic as conservatives hoped and progressives feared and that we may all be living with them for decades to come.