Justice Kennedy: The linchpin of the transformation of civil rights for the LGBTQ community 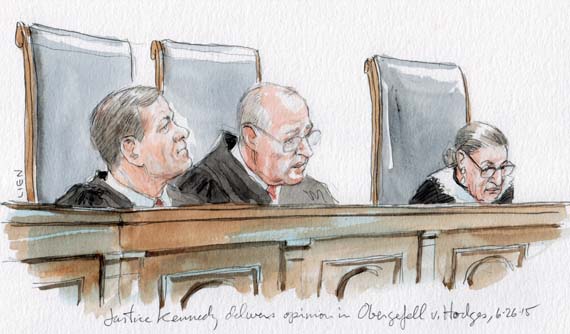 Paul Smith is the vice president of Litigation and Strategy at the Campaign Legal Center. He successfully argued in Lawrence v. Texas for the Supreme Court to overrule Bowers v. Hardwick.

The jurisprudence that Justice Anthony Kennedy developed over three decades on the Supreme Court is nigh-impossible to pigeonhole ideologically. But one thing is crystal clear. He was personally and deeply committed to the proposition that gay and lesbian Americans deserve full equality. He was the author of the four most important decisions of the Supreme Court moving the country in that direction — Romer v. Evans (1996), Lawrence v. Texas (2003), United States v. Windsor (2013), and of course Obergefell v. Hodges (2015), which mandated that all states provide full access to marriage for same-sex couples. In the first two of those cases, he found an ally in Justice Sandra Day O’Connor, and the court struck down state laws that discriminated against gay people by a margin of 6-3. With O’Connor’s departure, Kennedy was the deciding vote in Windsor and Obergefell. Without Kennedy on the court in recent years, we would still be living in a country in which many states refused to grant marriage rights to gay couples.

Given this reality, it’s remarkable to look back at Kennedy’s nomination in 1987 to fill the vacancy left by Justice Lewis Powell’s retirement. President Ronald Reagan’s first choice for that slot was Robert Bork, who famously was denied confirmation on the ground that he was too extreme a conservative. Bork was an adamant opponent of what is variously known as the right of privacy, the doctrine of unenumerated rights, or substantive due process — the principle established in a line of cases including Griswold v. Connecticut and Roe v. Wade that there are certain intimate and personal choices that the government cannot interfere with in our constitutional democracy. If Bork had been confirmed, he would have strongly opposed use of those cases to protect the constitutional rights of the gay community. But because he was not confirmed, and because Reagan’s second choice, Douglas Ginsburg, withdrew from consideration based on allegations about drug use, Kennedy served on the court for more than 30 years and personally shaped gay rights in America.

Only a few realized at the time of Kennedy’s confirmation that he was a potential supporter of LGBT equality. He was, after all, a very conservative judge with close ties to Reagan’s attorney general, Edwin Meese. But the signs were there. In a decision he authored for the U.S. Court of Appeals for the 9th Circuit back in 1980 called Beller v. Middendorf, Kennedy upheld the discharge of several gay people from the Navy. But he went out of his way to cite a long list of academic articles arguing for extension of the Griswold/Roe line of cases to protect the right to engage in private, adult consensual homosexual intimacy. And then he said that “we can concede arguendo … that some kinds of government regulation of private consensual homosexual behavior may face substantial constitutional challenge.” Then, years later, right after the court had ruled otherwise in Bowers v. Hardwick (1986), Kennedy gave a speech to a group of Canadian judges on unenumerated constitutional rights in which he said:

Many argue that a just society grants a right to engage in homosexual conduct. If that view is accepted, the Bowers decision in effect says the state of Georgia has the right to make a wrong decision—wrong in the sense that it violates some people’s views of rights in a just society.

It was these indications that caused Professor Laurence Tribe, the losing counsel in Bowers, to travel to D.C. and support the Kennedy nomination, only months after he had strongly opposed Robert Bork. Kennedy was ultimately confirmed by a vote of 97-0.

It took some years for Kennedy’s commitment to protecting gay rights to materialize. The first opportunity was Romer, in which his majority opinion struck down Colorado’s Amendment 2, a measure that banned all legal protections against anti-gay discrimination at the state and local level. Kennedy made clear in the opinion that animus toward the gay community could not justify harmful governmental actions. The surprising victory encouraged gay-rights advocates that they should look for an opportunity to ask the court to overrule Bowers, which stood as a major barrier to progress on civil rights for the LGBTQ community.

That opportunity came in Lawrence, in which Kennedy’s majority opinion focused not just on sexuality but on relationships and families. The Lawrence court recognized that same-sex relationships are just as valuable and important as different-sex relationships. And it held that the government has no right to label as immoral, and thus interfere with, individual choices about sexual intimacy or what type of family relationship to form. As Justice Antonin Scalia noted in his fiery dissent, once the court made those two moves, it was hard to see a constitutional stopping point short of marriage equality.

The poetic phrasing of Lawrence proved frustrating for some equality advocates in the ensuing years. As in the Windsor and Obergefell opinions still to come, Kennedy focused in Lawrence on substantive due process protection of individual liberty, rather than equal protection and discrimination. His touchstone was the principle that all people had a right to be treated by the law with “dignity.” In so doing, he avoided the question whether anti-LGBTQ discrimination is subject to heightened scrutiny under the equal protection clause. That made Lawrence a somewhat uncertain basis for challenging other laws such as Florida’s ban on adoption by lesbians and gay men or the ban on serving openly in the military.

Nevertheless, over time, gay-rights advocates adopted a strategy of attacking first the Defense of Marriage Act, which prevented the federal government from recognizing marriages of same-sex couples, and then proceeding with a marriage-equality case. The DOMA claim was thought to be a relatively safe one to bring back to the Supreme Court because it did not ask the court to require states to perform any marriages and because the federal government had always, in the past, deferred to state decisions about what marriages to license. These insights proved correct, as the court in Windsor invalidated the relevant provision of the DOMA.

The advocates then used the DOMA victory, as well as a number of marriage-equality victories in state and federal courts, as springboards to ask the court to rule in favor of marriage equality nationwide. By the time Obergefell was argued in 2015, marriage equality had spread throughout much of the country and there was strong reason for confidence that Kennedy would again join the four liberals to rule for equality for same-sex couples. And so he did.

The last big “gay case” for Kennedy was this term’s Masterpiece Cakeshop v. Colorado Civil Rights Commission, involving a claim by a conservative religious baker of a First Amendment right not to sell a wedding cake to a same-sex couple, despite Colorado’s law banning discrimination based on sexual orientation by businesses serving the public. The case looked like a potential blockbuster. But Kennedy seemed desperate to find a way to avoid a big ruling for either side. His majority opinion held that the administrative process at the state level showed signs of anti-religious bias and those indications provided a basis for vacating the state courts’ finding of illegal discrimination by the baker. But the court also said the following:

Our society has come to the recognition that gay persons and gay couples cannot be treated as social outcasts or as inferior in dignity and worth. For that reason the laws and the Constitution can, and in some instances must, protect them in the exercise of their civil rights. The exercise of their freedom on terms equal to others must be given great weight and respect by the courts.

The justices who joined this opinion included Chief Justice John Roberts and Justices Samuel Alito and Neil Gorsuch. This may suggest that although the rights of religious objectors like the baker in Masterpiece Cakeshop will receive great respect in the Supreme Court that is to come, that court is unlikely to overrule Obergefell. Such a decision would cause the kind of massive public backlash that the court rightly tries to avoid.