[NOTE: This post was updated with additional analysis at 3:30 p.m.]

In 1925, Congress passed the Federal Arbitration Act, which (among other things) provides that an agreement to arbitrate a dispute “shall be valid, irrevocable, and enforceable.” Ten years later, Congress enacted the National Labor Relations Act, which makes clear that employees have the right to work together for “mutual aid and protection.” Today the Supreme Court ruled, by a vote of 5-4, that employers can include a clause in their employment contracts that requires employees to arbitrate their disputes individually, and to waive the right to resolve those disputes through joint legal proceedings instead. Although it likely won’t garner the attention that some of this term’s other cases will receive, the decision was a huge victory for employers, because it could significantly reduce the number of claims against them.

Today’s opinion resolved three cases that were argued together on the first day of the term: Epic Systems Corp. v. Lewis, Ernst & Young LLP v. Morris and National Labor Relations Board v. Murphy Oil USA. Each arose when an employee who had signed an employment agreement that contained an arbitration provision filed a lawsuit in federal court, seeking to bring both individual and collective claims. The employers argued that, under the terms of the arbitration agreements, the employees needed to go to individual arbitrations, and today the Supreme Court agreed. 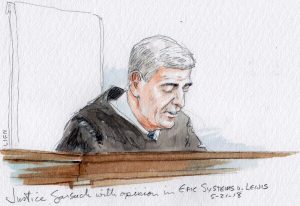 The ruling was perhaps the highest-profile opinion to date for the court’s newest justice, Neil Gorsuch. In an opinion that was joined by Chief Justice John Roberts and Justices Anthony Kennedy, Clarence Thomas and Samuel Alito, Gorsuch began by observing that the idea of a conflict between the FAA and the NLRA is relatively recent. Although the laws date back to the early 20th century, respectively, he noted, it was only in 2012 that the NLRB – “for the first time in the 77 years since the NLRA’s adoption” – indicated that “the NLRA effectively nullifies the” FAA in cases like this one. That delay, Gorsuch’s majority opinion seemed to suggest, casts some doubt on the legitimacy of the NLRB’s interpretation.

But in any event, the majority continued, the text of the FAA points squarely in the direction of enforcing the terms of an agreement to arbitrate. Congress, the majority emphasized, enacted the FAA “in response to a perception that courts were unduly hostile to arbitration.” In doing so, it not only instructed courts to enforce agreements to arbitrate, but it “also specifically directed them to respect and enforce the parties’ chosen arbitration procedures” – for example, as here, an agreement to “use individualized rather than class or collective action procedures.”

Nothing in the National Labor Relations Act, the majority concluded, trumps the FAA’s requirement that arbitration agreements be enforced. When a court is tasked with determining how two laws interact, the majority explained, it must figure out how to give them both meaning. Such a role is consistent with how the Constitution allocates responsibilities between the branches of the federal government:  “Our rules aiming for harmony over conflict in statutory interpretation grow from an appreciation that it’s the job of Congress by legislation, not this Court by supposition, both to write the laws and to repeal them.”

The majority rejected the employees’ argument that the NLRA’s reference to the right to engage in “other concerted activities for the purpose of collective bargaining or other mutual aid or protection” supersedes the FAA’s command to enforce arbitration agreements. The majority stressed that the NLRA provision at issue “focuses on the right to organize unions and bargain collectively.” It is significant, the majority noted, that the provision “does not express approval or disapproval of arbitration” and “does not mention class or collective action procedures.” Indeed, the majority stressed, the NLRA “does not even hint at a wish to displace the Arbitration Act—let alone accomplish that much clearly and manifestly, as our precedents demand.”

The majority also declined to defer to the NLRB’s conclusion that the NLRA trumps the FAA. Such deference is not appropriate, the majority explained, because the NLRB is not simply interpreting the NLRA, but is instead doing so “in a way that limits the work of” the FAA, which it does not have any authority to administer.

The majority concluded that, although it “may be debatable” whether the result it reaches is a sound policy, “the law is clear.” Congress can always pass new legislation to reach a different result, the majority pointed out, but it is not the Supreme Court’s job to “substitute its preferred economic policies for those chosen by the people’s representatives.”

Justice Ruth Bader Ginsburg took the relatively rare step of reading from her dissent – which was joined by Justices Stephen Breyer, Sonia Sotomayor and Elena Kagan – from the bench. Criticizing the majority’s decision as “egregiously wrong,” Ginsburg began by looking back at what she described as the “extreme imbalance” that once characterized the employer-employee relationship: In the late 19th and early 20th century, she observed, “workers often had to accept employment on whatever terms employers dictated.” That “imbalance,” she continued, prompted Congress to enact the NLRA and the Norris-LaGuardia Act (which preceded it) in the hope that employees could take collective action to “match their employers’ clout in setting terms and conditions of employment.” The NLRB and federal courts, she contended, have long understood such collective actions to include joint legal proceedings involving the terms and conditions of their employment.

Ginsburg lamented that today’s ruling will lead to “the underenforcement of federal and state statutes designed to advance the well-being of vulnerable workers,” because it will rarely be worthwhile for individual employees to pursue their own claims; even if they might otherwise be willing to do so, she added, they will also likely fear retaliation if they go it alone. The “upshot,” Ginsburg concluded, is that employers will “no doubt perceive that the cost-benefit balance of underpaying workers tips heavily in favor of skirting legal obligations.”

At 30 pages, Ginsburg’s dissent is five pages longer than Gorsuch’s majority opinion, which spends five of its 25 pages addressing Ginsburg’s arguments and criticism directly. The lengthy dissent and Gorsuch’s detailed response may help to explain why it took so long – nearly eight months – for the court to release the opinion, even if the outcome of the case seemed relatively clear after the oral argument.