A “view” from the courtroom: Rod Rosenstein’s brief respite from a rough-and-tumble world 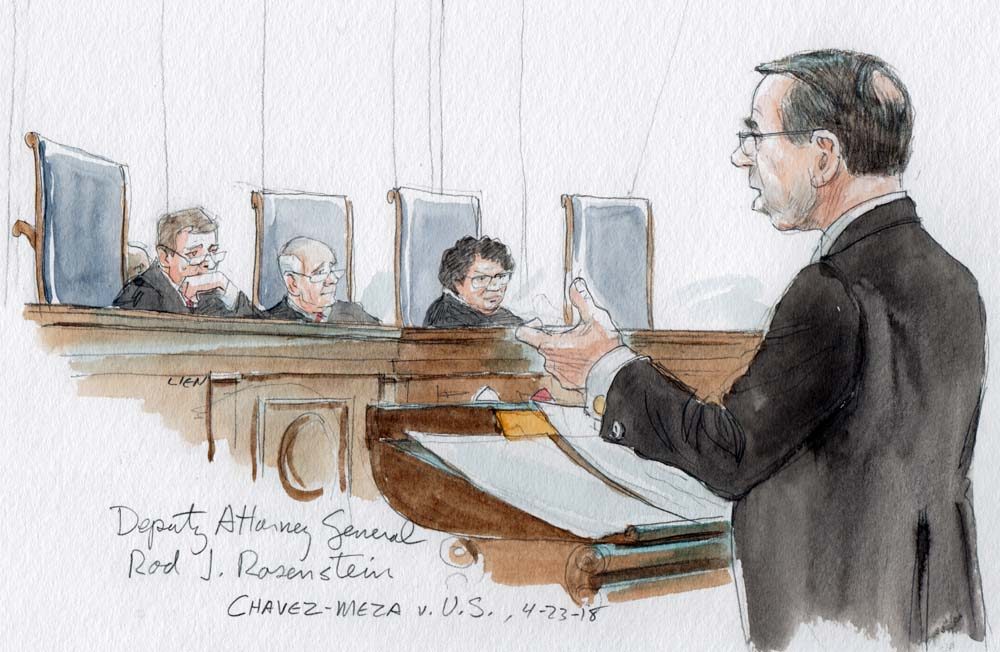 The U.S. solicitor general’s office is particularly busy during this final week of argument, with the government appearing in each of the six cases being argued.

Today, the justices will hear three cases in which the federal government is a party. The first is Lucia v. Securities and Exchange Commission, about whether that agency’s administrative law judges are “officers” of the United States under the Constitution’s appointments clause. That argument will—arguably—be the most interesting of the day, veering from Montesquieu to President Chester Arthur to the Warren Commission that investigated the death of President John F. Kennedy.

The second case is Pereira v. Sessions, which presents a more technical question about whether the government can stop the clock on an undocumented alien’s accrual of residency time by issuing a notice to appear for removal proceedings that omits key information.

But it is the third case—a rare post-lunch argument—that has reporters and others hanging around. That is not so much because of the question presented in Chavez-Meza v. United States, about whether federal district judges must provide more of an explanation for their sentencing decisions in certain circumstances, as because of who will argue on behalf of the government.

Deputy Attorney General Rod Rosenstein, the second-ranking official in the Department of Justice and someone who has been in the news of late, has chosen this case to participate in the tradition of having the attorney general or other high-ranking department official deliver a Supreme Court argument. 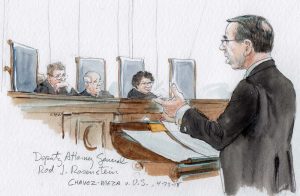 Recent U.S. attorneys general Janet Reno, William Barr, Michael Mukasey and Richard Thornburgh have all delivered arguments, Marcia Coyle reports in the National Law Journal, as did other senior Justice Department officials who were not in the solicitor general’s office, such as William Rehnquist and Antonin Scalia.

As the court’s lunch break winds down and the 1 p.m. start for the Chavez-Meza argument approaches, Rosenstein stands at the government’s table. One assistant to the solicitor general and one of Rosenstein’s top aides from the deputy attorney general’s office will sit at the table with him, while Deputy Solicitor General Jeffrey Wall will stay in the front row of the bar section. Solicitor General Noel Francisco is not here for this case.

Other members of Rosenstein’s staff are here, including James Swanson, an associate deputy attorney general who is also the author of “Manhunt,” about the search for John Wilkes Booth, and other books, including one about Kennedy’s assassination. (We don’t know whether he was here for the first argument’s references to the Warren Commission, but Swanson once delivered a lecture about the commission in the Supreme Court chamber.)

With about five minutes to go before the case begins, Rosenstein walks to his left to greet a member of the bar he recognizes. This also brings him close to the press section, and he gives a quick nod of recognition to Sari Horwitz, a reporter who covers the Justice Department for The Washington Post.

Mark Sherman of the Associated Press compliments Rosenstein on the “nice cufflinks” he is wearing, a presidential pair that were reportedly a recent gift from White House Counsel Don McGahn. Rosenstein holds up his right arm to show off one of the cufflinks and smiles as he says, “Not bad!”

He is clearly in a loose and comfortable mood, even dressed in the traditional morning coat and striped trousers that he has borrowed from the solicitor general’s office collection.

At 12:59, Rosenstein takes his handkerchief and gives his face a good all-around rub. Seconds later, the justices return to the bench with a mere knock of the gavel by Marshal Pamela Talkin. No repeat of the morning call of “Oyez!” etc.

Justice Neil Gorsuch does not return to the bench, because he is sitting out the case. The case comes from the U.S. Court of Appeals for the 10th Circuit, though Gorsuch was not a member of the three-judge panel that issued an opinion last April. (Rosenstein was last here at the Supreme Court for Gorsuch’s investiture last June. He presented the new justice’s commission from President Donald Trump.)

Todd Coberly, of Santa Fe, N.M., takes up the argument on behalf of Adaucto Chavez-Meza, who was convicted of methamphetamine-distribution charges and is seeking a reduction in his sentence. Coberly argues that a federal district judge should have provided some explanation why his client was not resentenced at the lower end of revised federal sentencing guidelines, as he had been in his first sentencing under stricter guidelines.

After Coberly’s argument, Chief Justice John Roberts recognizes “General Rosenstein.” The deputy attorney general, who is considerably taller than Coberly, does not adjust the height of the lectern with the side crank, as he could. He gets in his three reasons why the 10th Circuit opinion should be affirmed before he is interrupted by a steady flow of questions from the justices.

“In the absence of a statutory mandate, federal judges are not required to provide reasons for imposing a sentence within the lawful range,” Rosenstein says. Like Coberly, Rosenstein seems steady and well-prepared throughout his time at the lectern, and he even yields back a few minutes at the end by saying, “If there are no further questions.”

There is certainly no acknowledgement from the court that worlds are colliding or that Rosenstein has been working under an existential threat of being fired by his ultimate boss, the president. Of all the challenges facing an advocate preparing to go before the Supreme Court, working under that kind of threat cannot be easy.

After the argument, Rosenstein moves to the court’s outdoor steps for pictures with his family, just as many other first-time advocates do. Then the deputy attorney general heads toward a car waiting to return him to a less genteel arena.