Does the shape of the Supreme Court’s bench affect oral argument? 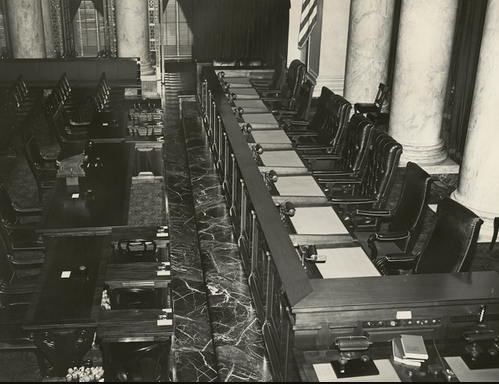 In the summer of 1969, shortly after his confirmation as chief justice, Warren Burger stood at the lectern in his new courtroom. Burger faced a straight bench, with the justices’ chairs arranged in a line. Reminiscing for his clerks about his one oral argument before the justices, he remembered that they kept interrupting one another, presumably because they could not see or hear each other well. “That situation should be changed,” Burger said, “… by curving the bench so each Justice could see his colleagues.”

Ryan Black, Timothy Johnson and Ryan Owens relate this Burger story, originally reported in Bob Woodward and Scott Armstrong’s landmark book, “The Brethren,” in an article in the latest issue of the Journal of Supreme Court History, “Chief Justice Burger and the Bench: How Physically Changing the Shape of the Court’s Bench Reduced Interruptions during Oral Argument.”

During the winter recess of the October 1971 term, Burger followed through on his plans. Carpenters cut the pre-existing bench and repositioned the three seats on either end at an angle to make the winged bench still used today. 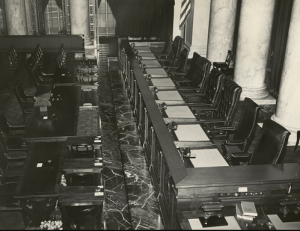 The straight bench used by the Supreme Court before February 1972

Initial reaction among the justices was mixed. The authors cite a note Justice Harry Blackmun wrote to himself during the first oral argument after the change, “New bench separates Brennan and White, hurrah!” Apparently, Justices William Brennan and Byron White used to chitchat during oral argument. The increased separation between them caused by the new angle in the bench seemed to put a stop to that, at least for this first argument.

In contrast, Justice William O. Douglas called the change “as useless and unnecessary as a man’s sixth Cadillac.”

Personal assessments aside, the authors empirically examined whether the new winged bench had the intended effect of limiting interruptions. The American Bar Association in 1971 “suggested such an analysis may be warranted,” as the authors note, but theirs is the first systematic attempt.

The authors analyzed the oral argument transcripts from the October 1962 to October 1982 terms, a span that includes the 10 term terms prior to and after the bench change. A computer script assessed whether a speaking justice was followed by the advocate or another justice.

The authors found that every justice “benefitted” – “they all were interrupted less often after the bench change.” Moreover, the justices farthest from the center of the bench – the most junior justices – became “considerably less likely to be interrupted with the curved bench.” Because the chief justice sits in the middle of the bench, Burger received the least benefit from his own project. As the second most senior justice at the time, Douglas, who derided the new bench, was also among those whose spot was not affected.

The authors also cite social-science findings about the importance of “visual and auditory connections” in communication. According to the authors, this research shows that “eye contact can foster greater cooperation among individuals” and “when people cannot hear, decision-making and collegiality can suffer.” The contribution these sensory dynamics make to group functioning is important, the authors suggest, because in many ways oral argument is a discussion among the justices. As the authors quote from Justice Anthony Kennedy:

When the people come … to see our arguments, they often see a dialogue between the justices asking a question and the attorney answering it. And they think of the argument as a series of these dialogues. It isn’t that. As John [Justice Stevens] points out, what is happening is the court is having a conversation with itself through the intermediary of the attorney.

Changing the bench isn’t the only institutional reform Burger instituted as chief justice. Among other innovations, he increased the allotment of clerks per justice to four, began issuing a regular report on the state of the judiciary and founded the Supreme Court Historical Society. He also established the practice of ensuring that a syllabus, or summary, is published with every opinion.

These syllabi help journalists, but that group may still have reason to object to Burger’s reconstructed bench. To make room for the bench wings’ new intrusion into the courtroom space, the old press section had to move. As the Wall Street Journal reported at the time, “The reporters lost … the best seats in the house, a few feet from the Justices and from the lectern at which lawyers address the court.”