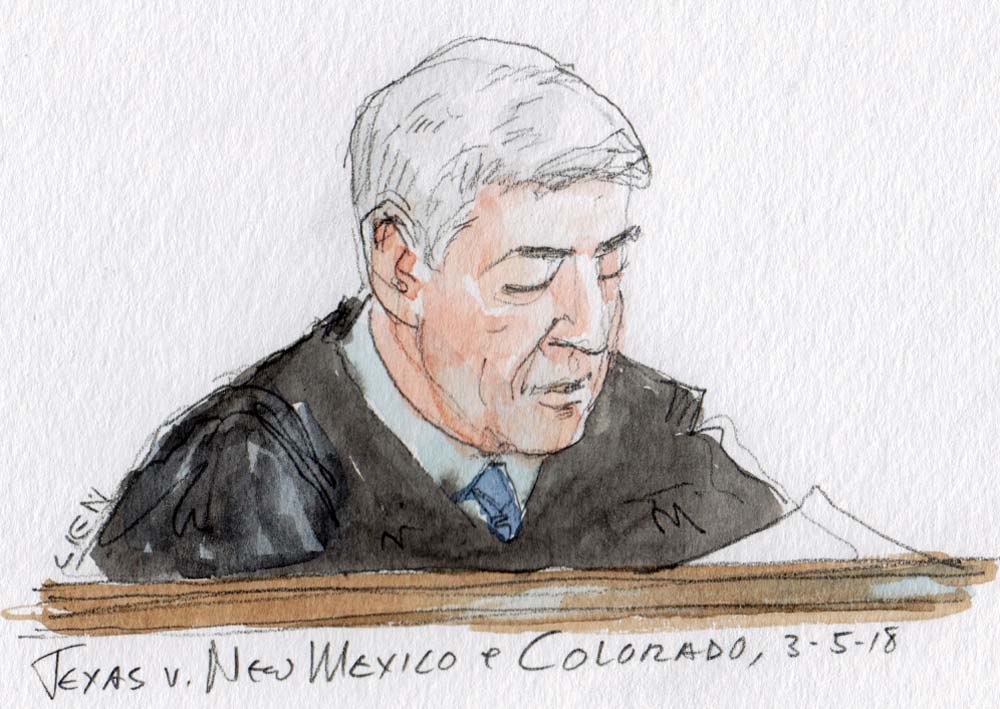 This term’s Rio Grande River decision covers a preliminary proceeding in the original-jurisdiction water dispute between Texas, New Mexico and Colorado over the flows of the river. A 1906 treaty between Mexico and the United States guaranteed that 60,000 acre feet of water would be delivered to Mexico annually. This was to be accomplished through the operations of the Elephant Butte reservoir, constructed about a decade after the treaty was signed. Additional water from the Elephant Butte reservoir beyond the 60,000 acre feet due to Mexico was sold by the United States Bureau of Reclamation to irrigation districts in Texas and New Mexico. The Rio Grande Compact further apportioned water rights among Texas, New Mexico and Colorado with congressional approval in 1939.

On October 10, 2017, the Supreme Court denied New Mexico’s motion to dismiss Texas’ complaint and denied intervention motions by the two local water entities. The exception of the United States and the first exception of Colorado to the first interim report of the special master were set for oral argument, and those matters were heard on January 8, as part of an interstate-apportionment double header. The only aspects of the Rio Grande dispute considered at this stage were the exceptions taken to the first interim report by the United States and Colorado.

Citing to Will Rogers, the Supreme Court noted that the Rio Grande may be the only river that could benefit from irrigation. The court made quick work of New Mexico’s primary argument. Reasoning that the role of the federal government in resolving disputes under the Constitution’s compact clause is to serve as a substitute for diplomacy between sovereigns, the court referenced its recent opinion on the Republican River. But the Rio Grande opinion carefully cautioned that “just because Congress enjoys a special role in approving interstate agreements, it does not necessarily follow that the United States has blanket authority to intervene in cases concerning the construction of those agreements.”

To support the holding, the court pointed to four key factors. First, the United States’ claims under the compact are “inextricably intertwined” with the Rio Grande Project and the contracts with downstream users at the heart of Texas’ complaint. Second, New Mexico conceded that the United States is an indispensable party to the complaint because of its role in delivering the compact’s water to the parties to this dispute. Third, any breach of the compact could impair the ability of the United States to meet its treaty obligations to deliver 60,000 acre feet to Mexico.

Lastly, and perhaps most importantly, the United States has sought to bring these claims in a complaint filed by Texas under the compact and seeking essentially the same relief. The Supreme Court explicitly stated that whether the United States could sue a state directly for violations of the compact is still an open question. At oral argument, in response to questioning by Justice Elena Kagan, Assistant to the Solicitor General Ann O’Connell had committed the United States to the position that it could file its own suit against New Mexico under the compact, irrespective of Texas’ claims. Additionally, Chief Justice John Roberts pressed O’Connell about whether Congress could have required such power as a condition of its approval of a compact. Those questions are left to be resolved in another case. For now, the dispute over the Rio Grande goes back before the special master for further proceedings on the merits. At stake are billions of gallons of water for agricultural use and international agreements. Texas’ boots are large enough to hold Uncle Sam as well.