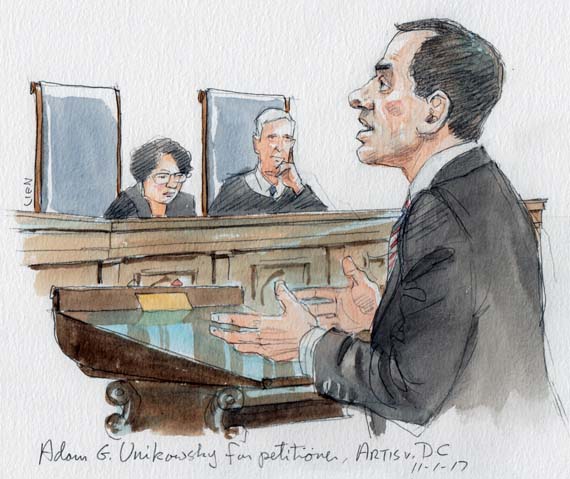 In its first 5-4 merits decision of the term, the Supreme Court yesterday divided on the meaning of the federal supplemental jurisdiction statute’s tolling provision. Though the question presented was quite narrow and technical, the split in Artis v. District of Columbia exposes broader differences among the justices about the scope of federal power.

In a nutshell, when a federal district court entertains claims within its usual jurisdiction, the federal supplemental jurisdiction statute, 28 U.S.C. § 1367, authorizes the court also to consider certain state claims that it could not otherwise hear — namely, claims that are part of the same case or controversy as the jurisdiction-conferring claims. If the district court later rejects the jurisdiction-conferring claims, it commonly dismisses the tag-along state claims without resolving them. The statute’s tolling provision, Section 1367(d), addresses how much time a party then has to refile the dismissed claims in state court. It states: “The period of limitations for any [supplemental state claim] … shall be tolled while the claim is pending [in federal court] and for a period of 30 days after it is dismissed unless State law provides for a longer tolling period.”

Tracking a disagreement among state high courts, the parties here offered the Supreme Court two competing takes on how Section 1367(d) operates. According to Stephanie Artis, who sued the District of Columbia after she lost her job as a city health inspector, the tolling provision suspends state limitations periods while a federal suit is pending and for 30 days thereafter. Under this so-called stop-the-clock approach, litigants whose supplemental claims are dismissed have whatever time remained on their state limitations period when they filed the federal action, plus 30 days, to refile in state court (unless state law provides more time). According to the city, the provision merely gives plaintiffs a 30-day grace period to refile (again, unless state law provides more time). The lower courts adopted the latter position and dismissed as time-barred several state-law claims that Artis had refiled 59 days after the dismissal of her federal suit.

Writing for the majority, Justice Ruth Bader Ginsburg endorsed Artis’ stop-the-clock interpretation of Section 1367(d). Chief Justice John Roberts and Justices Stephen Breyer, Sonia Sotomayor and Elena Kagan joined Ginsburg’s opinion. Echoing sentiments expressed by several justices during oral argument, the court concluded that the ordinary meaning of “toll,” at least when it refers to a timing rule and not a “‘bell’ or ‘highway traveler,’” is to suspend a limitations period or “hold it in abeyance.” This understanding, the court explained, accords with both dictionary definitions and the court’s own past decisions, which “employ the terms ‘toll’ and ‘suspend’ interchangeably.” When statutes instead establish grace periods to provide relief from time bars, the word “tolled” is conspicuously absent. According to the court, neither the city, nor the dissent (“for all its mighty strivings”), could identify “even one … federal statute that says ‘tolled’ but means something other than ‘suspended,’ or ‘paused,’ or ‘stopped.’” The court bolstered its reading by pointing out several linguistically awkward features of the city’s grace-period interpretation.

The city had contended that, even if the normal tools of statutory construction favored the stop-the-clock approach, the Supreme Court should disclaim that interpretation as a matter of constitutional avoidance. According to the city, if Section 1367(d) suspended state statutes of limitations, it would potentially exceed Congress’ authority under the Constitution’s necessary and proper clause. This is because the stop-the-clock approach displaces states’ own limitation rules more often than the grace-period approach does, without advancing any interest in the federal administration of justice that the less intrusive grace-period approach does not also fully serve. An amicus brief from 24 states went further and contended that the stop-the-clock approach is unconstitutional.

The court was unswayed. It viewed any constitutional doubts as having been largely resolved 15 years ago by Jinks v. Richland County, a unanimous decision rejecting an assertion that Section 1367(d) exceeded Congress’ powers. Jinks did not specifically address how Section 1367(d) operates, and the parties in that case may have assumed that it was a grace-period law. Nevertheless, the court here viewed Jinks as establishing the general propriety of congressional efforts to ensure federal litigants a reasonable opportunity to refile supplemental claims in state court after a federal court dismissal. Describing the stop-the-clock approach as a “standard, off-the-shelf means of accounting for the fact that a claim was timely pressed in another forum,” the court concluded that Congress had the discretion to use it to protect federal litigants, especially because, in the court’s view, concerns about the approach’s impact on state sovereignty “may be more theoretical than real.” Notably, during oral argument, the chief justice was among those who aired concerns about the stop-the-clock approach encroaching upon state sovereignty, but he ultimately joined the court’s decision in full.

In dissent, Justice Neil Gorsuch, joined by Justices Anthony Kennedy, Clarence Thomas and Samuel Alito, offered a very different account of Section 1367(d) and of the federalism values at stake. He also shared some reflections on fences.

The dissent began by casting “toll” as a broad term that encompasses both suspending a limitations period and removing the effect of an expired limitations period. As support, the dissent cited dictionaries that define “toll” to mean “take away” or “defeat,” as well as the court’s decision in Chardon v. Fumero Soto, which the dissent regarded as acknowledging that tolling provisions come in two distinct forms.

The dissent then offered two overarching reasons for concluding that Section 1367(d) uses “toll” in the grace-period sense. First, the dissent invoked tolling’s common law roots. In the dissent’s telling, the common law applied the stop-the-clock and grace-period approaches “in different circumstances to address different problems in equitably tailored ways.” The stop-the-clock approach was generally used to suspend a limitation period when “some disability” prevented a plaintiff from pursuing an action sooner — for example, when a defendant’s fraud concealed the plaintiff’s injury. Meanwhile, grace periods were commonly used in situations akin to the one in this case — when a party initially filed in one court and then had to resubmit in another. Dusting off some 17th-century English Reports, the dissent traced grace periods to the ancient common law rule of “journey’s account,” which gave litigants of yore enough time to journey across the kingdom to refile claims in the proper tribunal. Section 1367(d), the dissent insisted, should be construed against this common law backdrop. (Dismissing the dissent’s “history lesson,” the court found it implausible that the late-20th-century Congress that drafted the statute had journey’s account in mind, as opposed to the prevailing practice of using “toll” to mean “suspend.”)

Second, the dissent identified several “textual clues” said to favor the grace-period reading. One is that Section 1367(d) twice uses variants of “toll” — declaring first that the state period of limitations “shall be tolled” and then stating that the federal rule controls “unless State law provides for a longer tolling period.” As the dissent explained, the phrase “longer tolling period” must encompass state grace-period rules, because that is how most states give litigants extra time. But if that is so, then it requires “a lexicographical leap” to give “tolled” a different meaning (the stop-the-clock meaning) when the term appears earlier in the same sentence.

Relatedly, the dissent asserted that the stop-the-clock approach requires state courts to make an “apples-to-oranges comparison” when trying to figure out whether state or federal law provides the longer tolling period, an exercise that may lead to “absurdities.” The dissent offered an example of a litigant who files suit in federal court the day before her state limitations period expires. The court dismisses her supplemental claim a year later, and her state provides a one-year grace period to refile in state court. How much time does she have to refile? The federal stop-the-clock rule would give her 31 days, and the state grace period would give her a year, so at first glance she would seem to have a year — the “longer tolling period,” in the words of the statute. According to the dissent, however, the federal “tolling period” is not actually 31 days. Instead, it is, technically speaking, the period of time that the state limitations period was suspended by the stop-the-clock rule, plus 30 days — i.e., one year and 30 days. But that makes the federal tolling period longer than the state one. The litigant would therefore have to refile within 31 days because, even though the state rule is more generous, it does not (on the dissent’s reading) “provide for a longer tolling period.” Addressing this scenario, the court questions the dissent’s calculation of the federal tolling period and suggests that “the more natural comparison is between the amount of time a plaintiff has left to refile” under each rule. This exchange suggests that the court’s decision could well spawn future litigation over whether the federal rule or a state rule provides the lengthier tolling period.

Beyond this textual wrangling, the dissent also sounded the trumpet of federalism: “It may only be a small statute we are interpreting, but the result the Court reaches today represents no small intrusion on traditional state functions and no small departure from our foundational principles of federalism.” The dissent found it “difficult to see how,” interpreted as a stop-the-clock rule, Section 1367(d) “might be said to be necessary and proper to effectuate any recognized federal power,” rather than “an unconstitutional intrusion on the core state power to define the terms of state law claims litigated in state court proceedings.” Distinguishing Jinks, the dissent contended that the “federal interest Jinks recognized is fully discharged by a grace period,” and it described the stop-the-clock approach as infringing far more upon state sovereignty. From the perspective of the four dissenters, the court did not just misconstrue Section 1367(d); it rendered the statute unconstitutional.

The dissenters’ readiness to repudiate the stop-the-clock rule as an affront to state sovereignty could offer a preview of future clashes over the limits of federal power. Gorsuch insinuated as much when, as the end of his dissent, he suggested that “we’ve wandered so far from the idea of a federal government of limited and enumerated powers that we’ve begun to lose sight of what it looked like in the first place.” Time will tell how vigorously he pushes to turn back the clock, and whether a majority of the court will join him in cases yet to come.