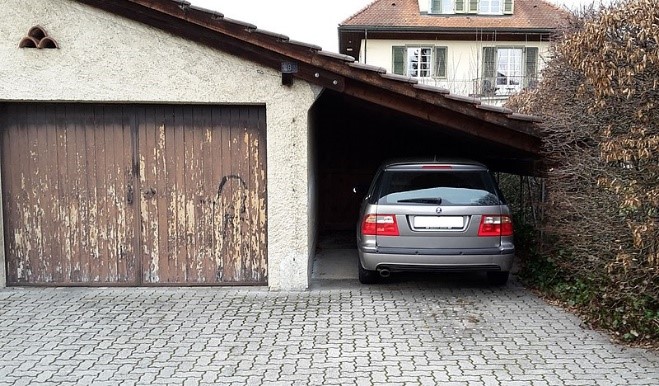 As a general rule, the Fourth Amendment requires police to have a warrant to conduct a search. But the courts have carved out a variety of exceptions to that general rule, including one known as the “automobile exception”: It allows police to search a vehicle without a warrant if the vehicle is “readily mobile” and they have probable cause to believe that it contains evidence of a crime. Next week a Virginia man, Ryan Collins, will try to convince the justices that the automobile exception should not apply to a motorcycle that was parked in his driveway.

In 2013, two Virginia police officers were searching for a motorcyclist who had managed to elude them by driving at high speeds – sometimes over 140 miles per hour – on a distinctive orange-and-black Suzuki motorcycle. Using social media, the officers determined that a motorcycle was parked

at the home where Ryan Collins spent several nights each week. An officer went to the home and up the driveway, where a motorcycle was parked under an opaque white cover. The officer lifted the cover to see the license plate and vehicle identification number for the motorcycle; from the VIN, he learned that the motorcycle was listed as stolen.

Collins was charged with the possession of stolen goods. At trial, he argued that evidence regarding the motorcycle’s license plate and VIN should not be admitted because the officer’s search of the motorcycle in the home’s driveway violated the Constitution. The trial court rejected that argument; Collins was convicted of receiving stolen property and sentenced to three years in prison, with all but two months of that time (which he had already served) suspended.

Collins asked the U.S. Supreme Court to weigh in, which it agreed to do last fall. In his briefing at the Supreme Court, he emphasizes that the Fourth Amendment protects not only the privacy of the home, but also the area surrounding the home, known as the “curtilage.” The expectation of privacy in the home, he continues, trumps any reduced expectation of privacy in cars and motorcycles. Indeed, he points out, the Supreme Court has acknowledged a “significant constitutional difference” between, on the one hand, searching a car on the road and, on the other hand, going on to private property “to seize and search an unoccupied, parked vehicle not then being used for any illegal purpose.”

Collins stresses that the Supreme Court has never ruled that police may search a vehicle within the curtilage without a warrant. And that makes sense, he suggests, because the justifications for the automobile exception do not apply to such vehicles. First, he reasons, vehicles within the curtilage aren’t any more mobile than either people or contraband such as drugs – both of which require a warrant before police can search a home for them. When a vehicle is parked in the driveway, he observes, police would normally have enough time to talk to the owner and either get consent to search the vehicle or obtain a warrant. Second, although drivers and passengers may not expect much privacy on the roads, where vehicles are regulated, the same is not necessarily true for the home and the driveway.

Finally, Collins warns that if the decision below is allowed to stand, police will be able to search vehicles parked in the curtilage “day or night.” Even more significantly, though, police will be allowed to engage in “far more intrusive conduct than removing a motorcycle cover” – for example, “entering the interior of a vehicle and perusing private spaces like the trunk and glove box” or even “tearing up a car’s upholstery.”

Both of the criteria for the automobile exception are satisfied in this case, the commonwealth argues. First, the police officer “had undisputed probable cause to believe” that the motorcycle was evidence of a crime, including because it “had been used to commit multiple felonies” and “had twice escaped pursuing police officers by taking off at dangerously fast speeds.” Second, despite Collins’ contention that “moveable vehicles somehow pose no exigency when parked on a driveway,” police were investigating Collins precisely because someone (who they believed to be him) was driving the motorcycle at high speeds. When the police officer entered the driveway, the motorcycle had “fresh tires” and was parked “only a car length or two into the driveway,” where it could be “kicked into gear in seconds.” Expectations of privacy are not increased just because a vehicle is on private property; all that matters is whether it is “capable of traveling” on the roads.

The commonwealth pushes back against Collins’ dire predictions with a warning of its own: The rule that Collins proposes “would undermine the applicability of the automobile exception, not just on private property but everywhere.” A ruling for the government would not be nearly intrusive as Collins would have the court believe, the commonwealth continues, because – even without a warrant – police can only search the areas of the vehicle that they have probable cause to search. Moreover, the search must be reasonable – which it was in this case, in which the officer only looked at the license plate and VIN on the motorcycle’s exterior. But if the justices are inclined to limit the automobile exception, Virginia continues, “the more sensible bright line would be at the physical threshold of a house or a similar fixed, enclosed structure like a garage” – a rule that would maintain the privacy of the home, which is at the heart of the Fourth Amendment.

Collins has amassed an unusual collection of “friend of the court” briefs supporting his position, filed by organizations ranging from the National Rifle Association to the National Association of Criminal Defense Lawyers and the American Motorcyclist Association. The NRA stresses that the Fourth Amendment’s “first and highest purpose is to protect the sanctity of the home,” an interest that “also forms the cornerstone of several other fundamental constitutional liberties, including the right to armed self-defense protected by the Second Amendment.” For its part, the AMA tells the justices that, although popular culture “often portrays motorcyclists as dangerous and lawless,” “millions of law-abiding, hard-working Americans enjoy riding motorcycles.”

Almost as interesting as the diverse group supporting Collins is the complete dearth of any “friends of the court” on the other side: Neither the federal government nor any states weighed in to support Virginia at the Supreme Court. Does this silence signal a belief that the commonwealth’s position lacks merit? And, if so, will the justices share that belief? We’ll know more about their views after next week’s argument.