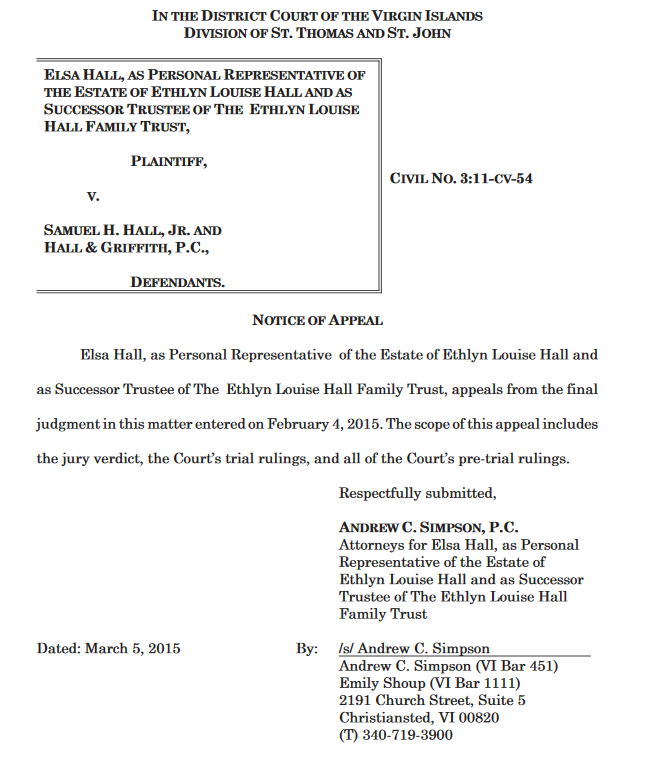 Two years ago in Gelboim v. Bank of America, the Supreme Court unanimously held that a district-court order disposing of the sole claim in one action was a final and appealable order, even if the action had been consolidated with other actions for some pretrial purposes through multi-district litigation. Two footnotes in Gelboim declined to consider whether the answer would be different when the order appealed from resolved one of multiple cases consolidated for all purposes under Federal Rule of Civil Procedure 42.

Hall v. Hall, to be argued on January 16, presents the issue the court acknowledged but did not resolve in Gelboim.

The case arises from a family dispute that spilled into the courts. Ethlyn Hall and her son Samuel had a falling out over Samuel’s use of rents he collected (while serving as Ethlyn’s attorney) and used to develop a vacation property in the U.S. Virgin Islands; Samuel alleged that Ethlyn had given him permission to develop the property, while she believed he had unlawfully converted the funds to his own use. The end of their relationship coincided with the elderly Ethlyn moving to Florida to live near her daughter Elsa.

Ethlyn sued Samuel and his law firm in the District Court of the Virgin Islands, in her individual capacity and as trustee of an “inter vivos” trust (Case No. 11-54). While the case was pending, Ethlyn died. Elsa replaced her as plaintiff in the individual claims as representative of Ethlyn’s estate and in the trust’s claim as successor trustee. Meanwhile, Samuel sought to challenge what he alleged was Elsa’s undue influence over Ethlyn through claims and counterclaims in the District Court of the Virgin Islands and in a Florida probate court. When the dust settled, Samuel had one action in the District Court of the Virgin Islands (Case No. 13-95) against Elsa in her individual capacity, alleging that she had interfered with Ethlyn’s relationship with Samuel. On Samuel’s motion, the district court consolidated the actions under Rule 42(a)(2), which allows courts to consolidate actions involving “common questions of law or fact.” The scope of the consolidation is uncertain — the U.S. Court of Appeals for the 3rd Circuit said it was for “all purposes,” while Elsa’s brief insists the court did not specify whether the cases were consolidated for discovery, trial, or all purposes.

At trial, the jury found against Elsa on her representative claims in 11-54 and on Samuel’s personal claims against her in 13-95, awarding Samuel $2 million in compensatory and punitive damages. The court entered separate judgments in each action. Elsa appealed the judgment in 11-54 to the 3rd Circuit. In 13-95, she moved for directed verdict or, in the alternative, a new trial. The court granted the motion for a new trial. Before the second trial, Elsa moved for a mistrial and for judgment as a matter of law on Samuel’s claims, which the court took under advisement; although the jury returned a verdict against Elsa in the retrial, no judgment has been entered and Elsa’s pretrial motions remain pending.

The 3rd Circuit dismissed Elsa’s appeal in 11-54 for lack of jurisdiction, concluding that there was no final judgment because the claims in 13-95 remained pending in the district court while Elsa contested that verdict. And Elsa had not obtained a certification under Federal Rule of Civil Procedure 54(b) for an immediate appeal of an order resolving some but not all claims as to some but not all parties. The court of appeals followed the rule that when cases have been consolidated for all purposes, a decision as to one set of claims is generally not appealable while the second set of claims remains pending. The 3rd Circuit employed a case-by-case approach, considering “the overlap among the claims, the relationship of the various parties, and the likelihood of the claims being tried together,” along with whether justice would be served and judicial economy not compromised if a separate appeal were allowed. The court held that separate appeals were not proper here, because the claims in the consolidated cases had been tried before one jury and there was an overlap of evidence and issues in the various claims.

Elsa begins with 28 U.S.C. § 1291. The statute uses mandatory language — the court of appeals “shall” have jurisdiction over “all final decisions of the district courts.” A final decision “ends the litigation on the merits and leaves nothing for the court to do but execute the judgment,” and “disassociates” the district court from the case. That language does not leave room for the 3rd Circuit’s case-by-case approach or for differential treatment of individual actions compared with consolidated actions. The time for appeal begins on “the date of entry of the final judgment against the party seeking to appeal” in one action.

That 11-54 (Elsa’s representative action) was consolidated with 13-95 (Samuel’s action against Elsa) in the district court does not change the analysis. Consolidated actions do not merge into a single action; they remain distinct for purposes such as personal jurisdiction, service of process and voluntary dismissal. They therefore should remain distinct for purposes of finality. The 3rd Circuit’s suggestion that Elsa should have obtained a Rule 54(b) certification was misplaced, because that rule does not apply when one action (11-54) is resolved in its entirety.

Elsa urges the court to adopt a clear rule for when appellate jurisdiction attaches in consolidated cases. She argues that the 3rd Circuit’s case-by-case analysis (used by six other circuits) is too uncertain and unpredictable, requiring an appellant to guess as to how the court of appeals might apply the multi-factor analysis if she waits until the entire consolidated case is resolved before appealing. It also is inefficient and will create additional work for courts of appeals — a “wise advocate” will file an early protective appeal in every consolidated case, fearing that her case might be the one in which review would have been available, rendering a delayed appeal untimely. Elsa also rejects the approach used by three courts of appeals that allows appeal only when all actions in one consolidated case have been resolved, even if consolidation was for limited discovery purposes.

Elsa’s solution is the same bright-line rule as in Gelboim: “Entry of final judgment in a case renders it appealable notwithstanding that the case is consolidated with another case that is not final.” This is consistent with the mandatory text of Section 1291. And it need not lead to piecemeal appeals. The court of appeals retains discretion to stay an appeal pending resolution of the other actions in the consolidated case and to consolidate them anew on appeal. The point is that the appeal can be taken and perfected from the one action immediately upon entry of judgment; how that appeal proceeds is up to the court of appeals.

In short, the 3rd Circuit had jurisdiction over Elsa’s appeal in 11-54. The court could choose, in its discretion, to stay that appeal pending resolution of 13-95.

Samuel’s point of departure with Elsa is the effect of consolidation. Samuel insists that a “case consolidated for all purposes is indistinguishable from any other case involving multiple claims for relief,” utilizing a single set of procedures, implicating a common question of law or fact, and comprising a single judicial unit. Consolidated cases are procedurally unitary, involving a single docket and a single set of proceedings from discovery to trial. They are substantively unitary, in that the standards for consolidation “closely resemble” the standards for joining related claims in a single case. And they are formally a single case, in that Rule 42(a)(2) allows district courts to “consolidate the actions,” distinct from Rule 42(a)(1) allowing district courts to “join” matters for hearing or trial or other “proceedings.” A case consolidated for all purposes does not differ from a case in which multiple claims were brought together under the Rules’ “‘liberal joinder’ provisions.”

It follows, Samuel argues, that claims in actions consolidated for all purposes should be subject to the same appealability rule that applies to multiple joined claims in a single action: An order resolving one claim, but not others, is not final and appealable under Section 1291. This conclusion avoids the inefficiency and “debilitating effect” of piecemeal appeals and the harassment and cost if unsuccessful litigants can pursue a succession of separate appeals. It preserves the role and policy of Rule 54(b), which provides that an order adjudicating fewer than all the claims or parties does not end the action, but grants the district court discretion to make such an order final in appropriate cases. And it protects the effective functioning of the appellate process, by ensuring that courts are not compelled to address common questions of law or fact in separate appeals and without the benefit of full district-court consideration of all related claims and issues.

To the extent an immediate appeal of some, but not all, claims is appropriate, Samuel argues, parties to consolidated cases have the same three safety valves for discretionary review as do parties to single actions with multiple joined claims — Rule 54(b) certification of finality of the claims decided; certified interlocutory appeal under 28 U.S.C. § 1292 for important controlling questions of law; and writ of mandamus for “clear and indisputable” serious errors of law. By contrast, Elsa’s approach leaves no room for exceptions in cases in which immediate review is not appropriate. Samuel rejects Elsa’s proposed appeal-and-stay regime, arguing that it improperly vests discretion in the courts of appeals rather than the district courts, where Congress and the federal rules placed it. It also lacks any discernible standards governing when a stay is appropriate.

Applying the correct rules, Samuel argues, the court of appeals lacked jurisdiction over Elsa’s premature appeal. Elsa’s and Samuel’s lawsuits were consolidated for all purposes and the district court conducted the proceedings jointly — a single trial management order, joint trial and single verdict form. The court entered final judgment on Elsa’s claims, but Samuel’s claims remained “outstanding” in the lower court. Elsa could have sought discretionary review under Rule 54(b), but declined to do so. She therefore must await a final judgment terminating all the claims before appealing any adverse decisions on single claims.