Symposium: The free speech right of public employees not to pay union dues 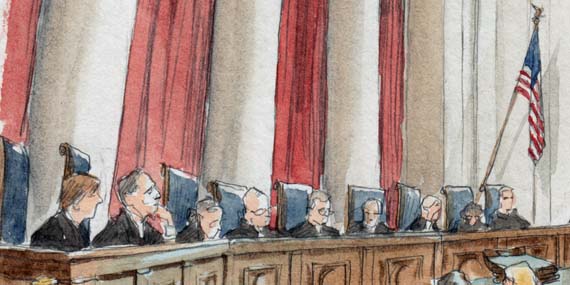 Terence J. Pell is the president of the Center for Individual Rights, which helped represent the plaintiffs in Friedrichs v. California Teachers Association and Yohn v. CTA, and which recently filed an amicus brief in Janus v. AFSCME on behalf of the plaintiffs in Yohn.

For many years, Mark Janus has been a child-support specialist in the Illinois Department of Healthcare and Family Services. Today he is the named plaintiff in Janus v. American Federation of State, County, and Municipal Employees, Council 31, a case that could well end laws in 22 states that require public employees to pay “agency fees” to a union regardless of whether they are members of the union or wish to support it. Janus’ case is perched on the tip of a spear aimed directly at the funding mechanism that has generously supported public-employee unions for the last 40 years.

Janus’ claim is straightforward: His union is one of several public-employee unions pressing the state of Illinois for greater salaries and pension benefits for public employees. Janus thinks the union’s efforts are pushing the state toward greater borrowing, higher taxes and possible bankruptcy. All of this, he says, will harm future generations, including his own children and grandchildren. So he quit his union.

Nevertheless, Illinois state law requires that he pay “agency fees” to his union to compensate it for its expenses in negotiating a contract on his behalf. Even though Janus doesn’t agree with the union’s efforts to secure greater salary and a bigger pension, he personally benefits from those efforts. Not unreasonably, the union thinks he should pay his “fair share” of what it costs to negotiate that contract.

Mark Janus’ views about public-employee salaries and benefits seem out of the ordinary. We assume that many, perhaps most, public employees support their union’s efforts to get them higher salaries and better pension benefits. But Janus argues that he has the right under the First Amendment to decide for himself whether greater salary and more benefits are good things. If so, the First Amendment protects his right no matter how unpopular with the union or out of step with his fellow public employees.

This is an unusual case. But the conflict between the free speech rights of individuals and the demands of the modern workplace is real. On the one hand, it seems correct that a public employer can restrict the right of its employees to promote their personal political views on the job. But it seems equally obvious that a public employer cannot force its employees to personally fund organizations with which they have deep political disagreements.

Some try to minimize the conflict in Janus’ case by denying that the First Amendment protects his right not to speak — in this case, his right not to pay union dues. The philosopher John Stuart Mill analogized freedom of speech to the economic concept of a free market in which the truth would more quickly emerge if the government allowed ideas to compete in widespread, public discourse.

Under this view, the purpose of the First Amendment is to promote speech — and the more the better. Correspondingly, it does not further the cause of truth to enforce a legal right for individuals to remain silent. So if Mark Janus thinks his union is wrong, the First Amendment ought to protect his right to speak out about it, not his right to withdraw from public debate by withholding his dues.

The First Amendment secures for the individual a “sphere of intellect and spirit” free “from all official control,” the Supreme Court held in West Virginia State Board of Education v. Barnette. As the court memorably put it in Barnette, if the First Amendment “guards the individual’s right to speak his own mind,” it surely does not allow officials “to compel him to utter what is not in his mind.”

So Mark Janus has precedent on his side. But that doesn’t entirely settle the case. In the view of some, notably New York Times legal columnist Linda Greenhouse, the Supreme Court’s First Amendment precedent is being “weaponized” as part of a politicized effort to shut down unions and make things worse for the workers they represent.

After all, Greenhouse and others say, no public employee could honestly argue that he or she doesn’t want higher salaries and benefits. Therefore, these commentators conclude, the speech of people like Mark Janus must be contrived, a fig leaf designed to hide a political effort to deprive public employees of their real speech interest, namely union speech in favor of higher salaries and better benefits.

Greenhouse’s argument points to an interesting question, though, one that will surely come up in this case. On the one hand, she believes that high-profile plaintiffs like Mark Janus are claiming protection for views so far out of the ordinary that they can’t be real speech, certainly not as real as the union’s speech on their behalf.

On the other hand, though, she suggests that if one of these lawsuits succeeds, it will wipe out the unions by causing a massive loss of membership. But if Janus’ views are idiosyncratic, it can’t be the case that most, or even many, public employees will follow him out the door should he prevail.

Which is it? How many union members will leave if the Supreme Court does away with compulsory dues? If it is a great number, then states like Illinois could argue that there is a compelling government interest in preserving compulsory dues in order to support the system of collective bargaining necessary to managing a public workforce.

But not many may leave, at least according to evidence the unions offered in Yohn v. California Teachers Association (a case in which my firm is serving as co-counsel). The plaintiff teachers in Yohn asked the unions whether loss of compulsory dues would make them insolvent or preclude them from serving effectively as exclusive bargaining representatives.

In response, the unions said that “some number” of workers will refuse to pay dues and that this number “may be substantial.” They did not attempt to quantify the number who might leave or suggest that the loss of those workers’ dues would impede the unions from effectively representing employees. The unions’ response in Yohn is consistent with their responses in the two other cases that have challenged compulsory dues — Harris v. Quinn and Friedrichs v. CTA. In each case, public-employee unions have had an opportunity to quantify the risk to their solvency but did not try to do so.

In fact, the number of nonmember fee payers constitutes a tiny fraction of the employees who fund public-employee unions. We learned in Yohn, for example, that the nonmember fee payers comprise seven percent of the total number of dues-paying members of the California Teachers Association, and only three percent of the National Education Association’s total membership of three million.

These numbers do not support the claim that unions depend on compulsory dues to discharge their duties as designated collective-bargaining agents. If that is so, then the states do not have a compelling interest in suppressing the free speech rights of public employees who choose not to support the union.

Step back, though, from the Supreme Court’s First Amendment precedents for a moment. There is another way to think about the issue in the case. The unions claim that compulsory dues foster vigorous public debate by enabling the unions to represent the views of their members effectively. However, one issue that compulsory dues keep out of public discussion is the views of public employees themselves about the value of their union.

Ultimately what unions may fear is not that the loss of agency fees will make it harder to represent their members’ interests, but instead that doing so will spur debate among public employees about whether the union is adequately and accurately representing the real interests that public employees themselves believe they have.

When public employees go to work for the government, they give up some of their free speech rights. Teachers may not promote their personal political views in the classroom. Employees of state agencies, especially law enforcement agencies, may not publicly criticize their employers in a way that undermines the agencies’ mission.

But there is no purpose served by preventing public employees from expressing their views about their union in the decision about whether to fund it. Indeed, compulsory union dues seem to impede a type of debate that might further the interests of collective bargaining. Ending compulsory dues would take the question of the value of collective bargaining away from the courts and the legislature and put it back in the hands of the individuals best situated to discuss that question intelligently and arrive at their own, informed answer.