Argument analysis: Justices seem to side with state on sports betting 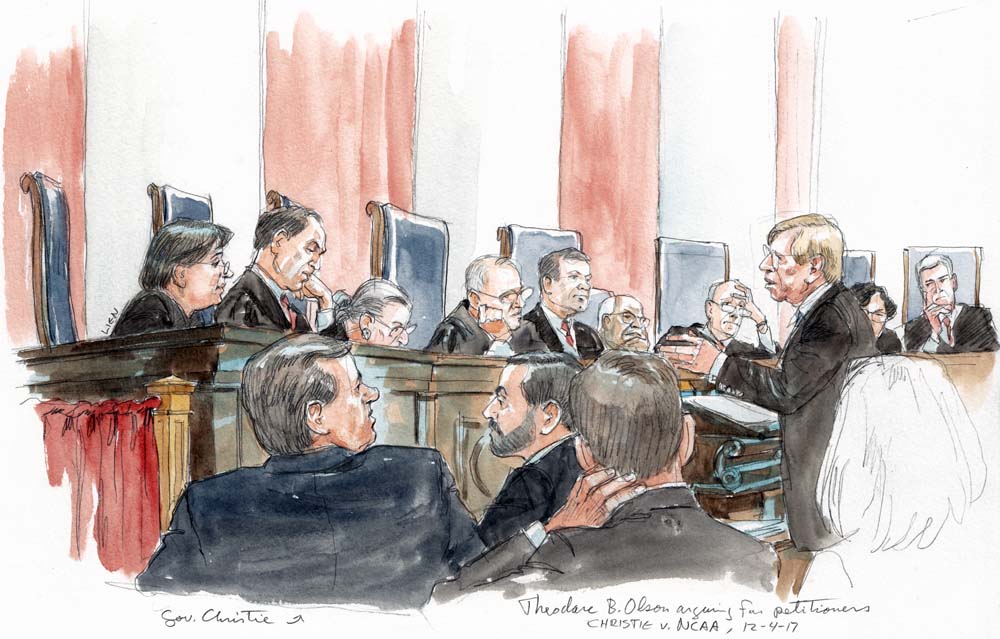 The Supreme Court heard oral argument today in New Jersey’s challenge to a 1992 federal law that bars states from allowing sports gambling. New Jersey and members of the state’s horse-racing industry told the justices that the law violates the Constitution, which the Supreme Court has interpreted to prohibit the federal government from “commandeering” the states into enforcing federal law. The National Collegiate Athletic Association and the four professional sports leagues countered that the law is perfectly constitutional, because it doesn’t require the states to do anything; it simply bars them from authorizing sports gambling. After an hour of spirited debate today, a majority of the justices seemed inclined to agree with New Jersey. The court’s ruling could have implications not only for sports betting, but also for everything from state laws decriminalizing marijuana to physician-assisted suicide and self-driving cars.

The law before the court is the Professional and Amateur Sports Protection Act, which Congress passed in 1992. PASPA bans sports gambling in all but four states – Delaware, Montana, Nevada and Oregon – that already permitted it, and it would also have allowed sports betting at casinos in New Jersey as long as the state set up the scheme within one year after PASPA went into effect. New Jersey didn’t act then to establish a sports-betting program, but it changed its mind in 2012, when it passed a law legalizing sports betting.

The NCAA and the four major professional sports leagues – the National Basketball Association, the National Football League, the National Hockey League and Major League Baseball – challenged the 2012 law, arguing that it violated PASPA. Federal courts sided with the NCAA and the leagues, rejecting the state’s argument that PASPA violates the 10th Amendment on the ground that the law does not require the states to do anything. After those rulings, the New Jersey legislature tried again, with a new law: Instead of authorizing sports betting, the 2014 law repealed existing bans on sports betting, at least as they applied to New Jersey casinos and racetracks. But the NCAA and the leagues challenged the new law, and the U.S. Court of Appeals for the 3rd Circuit once again ruled in their favor and invalidated it.

With its governor, Chris Christie, in attendance today at the Supreme Court, New Jersey seemed to find a more sympathetic audience in the justices. Representing the state, attorney Theodore Olson stressed that the Founding Fathers had wanted to replace the failed confederacy of states with a national government that would regulate people, but not states. But despite that intent, he emphasized, PASPA is a “direct command” to the states.

Some of the court’s more liberal justices were skeptical, comparing PASPA’s effect with the well-established doctrine of pre-emption, in which federal laws trump conflicting state laws. Olson countered that the federal government could opt to regulate sports betting itself, which would supersede state laws like New Jersey’s. But Congress hasn’t done so here, Olson noted. Instead, PASPA simply tells the states what to do – which violates the Constitution.

Justice Elena Kagan was unconvinced. You are suggesting, she told Olson, that Congress can only pre-empt state laws if it enacts a comprehensive regulatory scheme. But how, she asked, do we know when the scheme is sufficiently detailed?

Kagan also had questions about Olson’s efforts to rely on the Supreme Court’s earlier cases on the 10th Amendment and the anti-commandeering doctrine. If the gist of those cases is that the federal government can’t conscript state officials to do its work, she said, whom is PASPA “conscripting”?

Olson responded that PASPA tells New Jersey that it cannot regulate sports gambling the way it would otherwise choose to do. But Justice Sonia Sotomayor was dubious that PASPA requires the states to act. The law doesn’t tell the state that it has to enforce PASPA, she pointed out. “States make choices all the time” about what laws to enforce, she suggested; if they tried to enforce all of their laws all the time, they would go bankrupt. 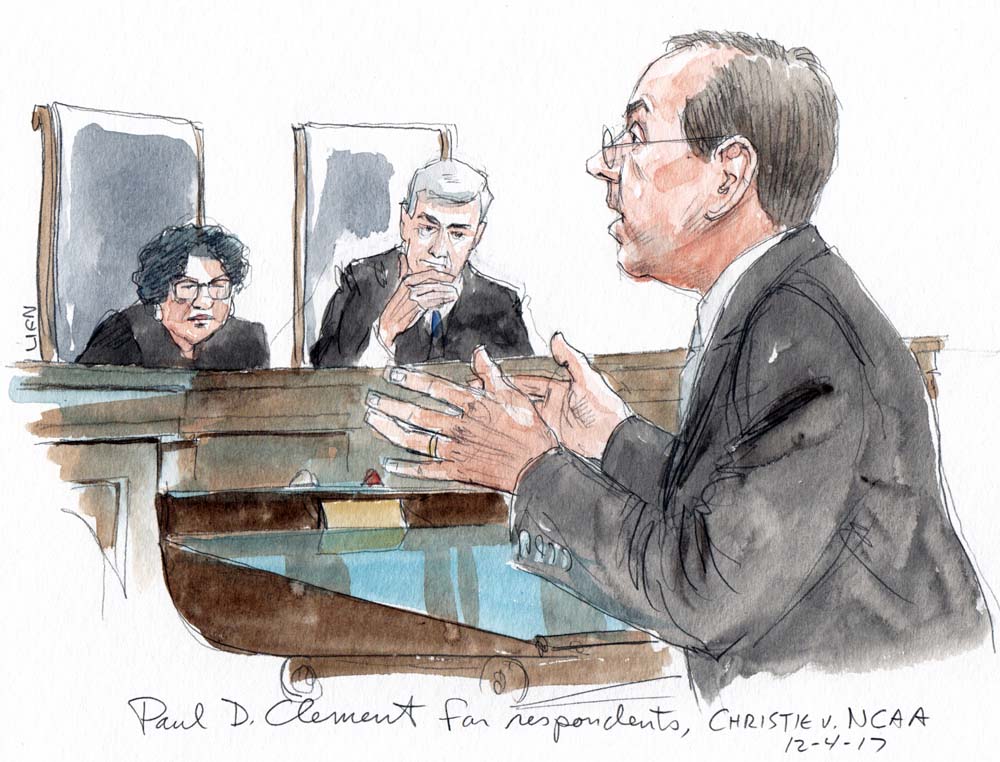 A few minutes later, in response to a hypothetical question from Chief Justice John Roberts about whether the federal government could order the states to reduce their expenditures on state pension benefits, Kennedy complained that such a scenario “blurs political accountability” because citizens don’t know whether the policy is coming from the federal or state government. “That’s precisely what federalism is designed to prevent,” Kennedy concluded.

Roberts chimed in, pointing out that if Congress wanted to impose a flat ban on sports gambling, it could have done so itself and included a clause that specifically indicated that conflicting state laws are pre-empted. Justice Samuel Alito echoed this sentiment, telling Clement that “Congress could have prohibited sports gambling itself.” “So what federal policy is served” by PASPA, Alito asked Clement, that would not have been served by a congressional ban?

Justice Neil Gorsuch added that enacting a law like PASPA, which would require the states to enforce the ban on sports gambling, would be cheaper than a federal ban because it would not require the federal government to spend any money of its own.

Perhaps most crucially for New Jersey, Justice Stephen Breyer pressed Clement to explain Congress’ goal in enacting PASPA. When Clement responded that Congress wanted to eliminate “state-sponsored or -operated gambling taking place by either individuals or the state,” Breyer pounced. That means, he observed, “there is no interstate policy other than the interstate policy of telling the states what to do.”

Arguing for the United States in support of the NCAA and the sports leagues, Deputy Solicitor General Jeffrey Wall tried to offer the justices a way around a potentially sticky constitutional problem. Here, he said, even though New Jersey characterized its 2014 law as a repeal of existing state laws regulating sports betting, the law actually authorized sports betting, in the sense that it only allowed sports betting at 12 specific casinos and racetracks in the state.

But that response got him into hot water with Roberts, after Wall responded “yes” to a question about whether New Jersey could repeal all existing state laws, “across the board, no exceptions.” “You have no problem at all and anyone can engage in any kind of gambling they want” – including a 12-year-old going to a casino? Roberts asked incredulously.

The argument continued for a few minutes more, but that exchange may have been enough for at least five justices. A decision in the case is expected by summer.