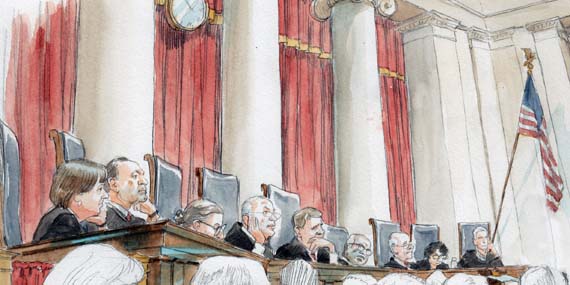 Linda Edwards is a professor at UNLV Boyd School of Law.

Among the welter of amicus briefs in Whole Woman’s Health v. Hellerstedt was a brief filed by 112 women lawyers. In it, these women told the world, many for the first time, that they have had an abortion. The brief marks their “coming out” to their professional world — a combative, masculine milieu where gender-based vulnerability can be the kiss of death.

But the brief is more than a public disclosure. These women spoke from inside the justices’ own rhetorical circle. As one of the brief’s authors explained, “It’s the Justices’ community—it’s their colleagues and people who have argued before them and former law school classmates and co-clerks.” For instance, a former clerk related her desperate situation after a contraception failure at a time when she “did not have the mental, emotional, or perhaps most importantly, economic resources to have a child.” A litigation partner at a large firm explained how her abortion as a teenager had allowed her to be the first in her family to graduate from high school, let alone become a lawyer. The overarching theme is that without reproductive choice, these women could not have participated fully in the same professional community in which the justices themselves have lived and thrived.

The brief is an example of a “voices brief,” the first new kind of appellate briefing since the iconic “Brandeis brief” in 1908. Voices briefs supplement an appellate record with stories drawn from the lives of strangers to the case. They are often told in the first person (e.g., “I had an abortion when I was a young lawyer, just out of law school and clerking for one of the best known and busiest federal trial judges in the country.”). Because the stories appear for the first time on appeal, they are subject to no evidentiary standards. They are offered instead as legislative (policy) facts, subject to no further testing than any other policy facts in an appellate brief.

Recent years have brought an explosion of voices briefs. Obergefell v. Hodges alone saw a total of 16 (more than 10 percent of the amicus filings in the case). And after the dust had settled in Whole Woman’s Health, 17 briefs had related stories of non-parties (more than 20 percent of that case’s amicus filings). Nor are voices briefs primarily a progressive strategy. In Obergefell and Whole Woman’s Health, voices briefs were roughly evenly submitted on both sides of the case. For deeply personal constitutional issues such as marriage equality and reproductive rights, voices briefs are now de rigueur.

Have these briefs influenced the Supreme Court? The truthful answer is that no one outside the court can really tell. The justices are unlikely to refer directly to voices briefs in their opinions, because controversial sources are not strategically helpful in a public document whose purpose is to justify and persuade. We can only speculate by reading judicial tea leaves.

For example, prior to Planned Parenthood of Southeastern Pennsylvania v. Casey, two voices briefs had been filed on the pro-abortion rights side. The briefs shared grim stories from hundreds of women who had sought illegal abortions out of desperation. Justice Anthony Kennedy’s Casey opinion seemed to echo the pro-abortion rights voices briefs, referring to women’s suffering as too intimate and personal for the state to control. Later, in Gonzales v. Carhart, after the filing of an anti-abortion voices brief on behalf of women who later regretted their abortions, Kennedy wrote, “While we find no reliable data to measure the phenomenon, it seems unexceptionable to conclude some women come to regret their choice to abort the infant life they once created and sustained.” We might wonder to what extent Kennedy’s comments in each case may have been influenced by the voices briefs he had presumably read.

As recently as Obergefell, we may have seen signs of influence. In Obergefell, nine voices briefs were filed in support of marriage equality. The briefs vividly recounted stories of the love, struggle and suffering of committed same-sex couples. The stories explained why marriage is important to them and to their families. They wanted to marry for all the reasons that prompt any couple to want to marry. Those same themes were eloquently reflected in the final paragraph of Kennedy’s deciding opinion:

As some of the petitioners in these cases demonstrate, marriage embodies a love that may endure even past death. It would misunderstand these men and women to say they disrespect the idea of marriage. Their plea is that they do respect it, respect it so deeply that they seek to find its fulfillment for themselves. Their hope is not to be condemned to live in loneliness, excluded from one of civilization’s oldest institutions. They ask for equal dignity in the eyes of the law. The Constitution grants them that right.

Although the paragraph mentions only the petitioners, it may not be too much of a reach to think that Kennedy had others in mind as well.

Even Justice Antonin Scalia may have been influenced by some of the Obergefell voices briefs, at least the seven filed in opposition to marriage equality. Those briefs told stories from the children of same-sex relationships, relating the harm those children said they suffered. Then, in oral argument, Solicitor General Donald Verrilli maintained that there was no evidence of harm to children. Scalia interrupted him to point out that some of the briefs had contradicted that statement.

Voices briefs can be powerful, even heart-wrenching, and they may even have some influence, but are they appropriate advocacy? The time has come to ask some tough questions: Are they legally permissible? Theoretically legitimate? How do they compare with non-record sources commonly consulted by appellate courts, including internet explorations performed by judges at their own computers and experiments orchestrated in chambers? Are voices briefs really so different from the policy arguments we have accepted without blinking for over 100 years?

These foundational questions quickly take us into even deeper waters — legal theory, framing, narrative theory and cognitive science. The briefs prompt us to look at constitutional deliberation in a new way. Soon we find that voices briefs are interrogating long-accepted assumptions rather than the other way around.

In an article published in the Yale Journal of Law and Feminism, I’ve argued that voices briefs are not as radically new, at least in function, as they first appear. And because they are offered publicly, unlike internet research done privately in chambers, they are less problematic than many other sources that clearly influence today’s Supreme Court. What’s more, cognitive science has shown that, far from introducing bias to a neutral process, voices briefs may be the only way to counter the pre-existing values bias that always accompanies human deliberation. And irrespective of outcome, voices briefs can encourage the court to write opinions that respect and value all sides of an issue, thus modeling better discourse in today’s polarized public square.

Voices briefs do prompt some misgivings. Like all briefing strategies, they can be misused, raising concerns about reliability, relevance, and the role of legislative facts on appeal. The article recognizes these concerns and proposes normative practices to improve reliability and utility.

Constitutional decisions should not be made either by polling citizens or by emotional reactions to tearful stories. Far from it. But neither should we entertain the fantasy that legal decisions can ever be made in a hermetically sealed environment. Especially when the briefs offer perspectives that may be outside the personal and professional experiences of the justices, there is little to lose and much to gain when amicus filers share their stories.