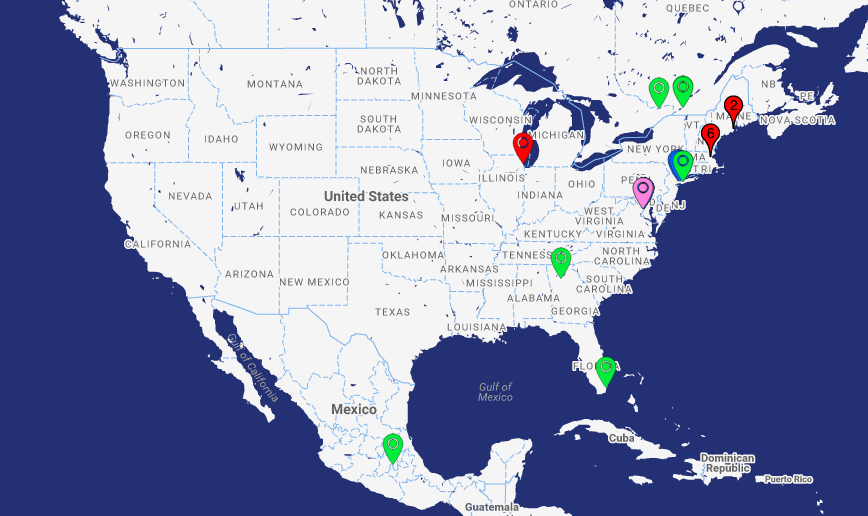 Justice Breyer embarked on a NAFTA tour this past month.

On October 11, Fordham Law School honored Justice Anthony Kennedy with the 2017 Fordham-Stein Prize, which is given annually to “an individual whose work embodies the highest standards of the legal profession.” According to Fordham News, the justice took the opportunity to say a few words about the promises and perils of the internet:

The cyber age is changing not only our technical world but how we think about who we are. And we’re not sure where this revolution is going. We must be careful not to allow this revolution to become what is known as the bypass age. We can’t allow the Internet to bypass the concept of who we are, what our heritage is, and what our destiny is. And that destiny and that heritage are to preserve and transmit freedom to the next generation.

On October 16, Justice Sonia Sotomayor sat for a Q&A session with Queens College students in Flushing, New York, where she lamented the lack of civic engagement today. “For me, I don’t think schools — whether they’re middle schools, high schools, colleges, and sometimes even law schools — are spending enough time inspiring their students … to take charge of their life and be aware of what civics is about.” The Queens Chronicle covered the talk.

Later that day, Sotomayor appeared at Hofstra University, where she explained the difference between stupidity and ignorance. “Stupid is the lack of capacity to understand, ignorance is the lack of exposure to know. Most of us are ignorant about things we don’t know. But lots of us are ashamed of admitting ignorance because we confuse it with stupidity.” The Hofstra Chronicle covered the discussion, and the school has released video online.

The following day, Sotomayor spoke to female high school students in a conversation hosted by Seneca Women and iCivics.

While Sotomayor was traveling around New York, Justice Elena Kagan regaled students at the Chicago-Kent College of Law with stories about daily life at the Supreme Court, including the upsides and downsides of relinquishing the junior justice position to Justice Neil Gorsuch. On one hand, Kagan mused, she no longer has to take notes at the justices’ meetings, open to the door to the conference room, and serve on the cafeteria committee. On the other hand, she said, the junior justice always speaks last when the justices go around the table discussing cases at conference, and being the ninth and last person is, in her opinion, better than being the eighth. This blog and the Chicago Tribune covered Kagan’s remarks. Full video of the event is available on YouTube.

On October 17, Chief Justice John Roberts and Justice Stephen Breyer spoke at the 2017 First Circuit Judicial Conference in Rockport, Maine. A circuit executive for the U.S. Court of Appeals for the 1st Circuit told the Knox Village Soup that the chief justice prefers not to include the press at these conferences, before later stating that longstanding 1st Circuit policy does not allow media to be present. Pierce Atwood’s Maine Appeals blog, however, does have a brief summary of the justices’ comments at the conference. According to the blog, both Roberts and Breyer expressed a desire to keep cameras out of the Supreme Court.

Back in Washington, Justice Samuel Alito spoke to students in the University of California Washington Program on October 20, while Kagan hosted the 2017 American Inns of Court Celebration of Excellence on October 21.

Gorsuch spoke about civility and campus free speech at the American Inns of Court National Conversation on Civility on October 21. “I’m a great believer in the First Amendment. It worries me when young people today at universities are not able to express themselves. When civility goes so far as to suppress disagreement, you’ve gone too far,” Gorsuch told the audience. Coverage comes from the National Law Journal (subscription required), the Associated Press and the ABA Journal.

Hofstra hosted its second justice in a month when Breyer delivered the keynote speech at the Hofstra Law Review’s symposium on the Federal Sentencing Guidelines at 30 — the video for which is posted online.

Roberts participated in a discussion on the workings of the Supreme Court at the Library of Congress on October 24.

Breyer was busy at the end of October, logging appearances at three events in Canada, a law school reunion and a conference over the span of three days. He spent October 25 in Quebec, where he spoke about “National Laws and New Global Realities” at the Conseil des relations internationals de Montreal (CORIM), and then at the Lord Reading Law Society. Francophones (like Breyer) can read a summary of the former event here. On October 26, Breyer participated in a Supreme Court of Canada symposium in Ottawa (a webcast for which is available online), before traveling south to Cambridge, Massachusetts, for Harvard Law School’s “HLS in the World” bicentennial summit. The following day, he made his way to Washington to speak at the 2017 Mass Tort Global Settlement Architecture Conference (recap available via Perrin Conferences’ LinkedIn).

Of all these events, the Harvard Law School summit was by far the most popular and heavily covered in the press — in no small part because Breyer shared the spotlight with not one, two or three, but five past and current Supreme Court colleagues. Breyer, Roberts, Kennedy, Kagan, Gorsuch and retired Justice David Souter all reminisced about their years at Harvard Law. Crowd-pleasing tales included one about Souter sustaining fencing injuries in a mock duel as a 2L, and Kennedy’s account of being called out by a law school dean for studying the revenue code at a Red Sox game. Having multiple justices on the stage provided opportunities for some inter-generational flattery — asked to identify favorite professors at HLS, Kagan said that hers was Breyer (who had taught her antitrust class), while Gorsuch glowingly described the time he spent clerking for Kennedy. Kennedy responded: “You didn’t always do what I told you to do as my clerk. You better start doing it now.” Coverage of the festivities comes from The Washington Post, CNN, the Boston Globe, the Harvard Crimson and the Harvard Gazette. Video of the event can be viewed on YouTube.

On October 27, Justice Ruth Bader Ginsburg spoke at the Equal Justice Works 2017 Conference and Career Fair. Andrew Hamm covered the appearance for this blog. Video is available via C-SPAN.

On the same day, Alito participated in a Georgetown Law Journal panel on customary international law (a summary is available at Georgetown Law News), while Breyer made an appearance at the British Embassy Washington for an event marking the 100th anniversary of the Balfour Declaration.

That weekend, Breyer was a featured guest at two book festivals, opening the Marcus Jewish Community Center of Atlanta 2017 Book Festival on November 4 and speaking about his latest book, “The Court and the World,” at the 37th Annual Berrin Family Jewish Book Festival in Miami on November 5.

Ginsburg delivered remarks to the College of Labor and Employment Lawyers on November 11 in Washington.

That same night, Roberts presided over the final round of the 2017 Ames Moot Court Competition at Harvard Law School. A summary is available via The Harvard Crimson.

Last but not least, Gorsuch gives the keynote address this evening at the Federalist Society’s 2017 National Lawyers Convention Annual Dinner.