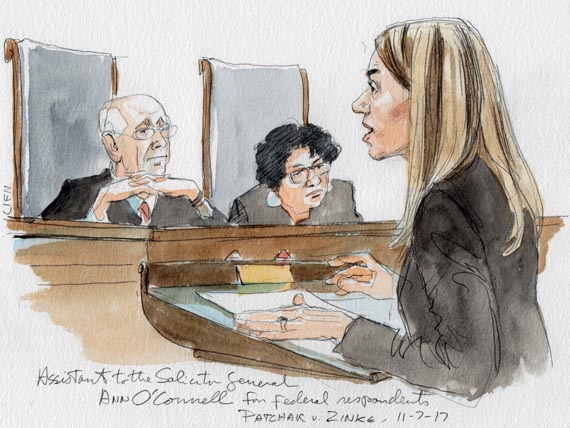 Readers worrying that Justice Neil Gorsuch is hogging time at oral argument may find more cause for concern when I lead with his “where’s the beef” quip from today’s argument in Patchak v. Zinke. But a post about a separation-of-powers case doesn’t offer enough choices for a good lede that I can ignore his efforts. Pleasantries aside, though, the end point of a relaxed and thoughtful discussion this morning bodes ill for David Patchak’s effort to persuade the justices to invalidate a federal statute ratifying the decision of the Secretary of the Interior designating as Indian land a tract near Patchak’s home.

That’s not to say Patchak’s litigation efforts have not been impressive. His suit challenging the secretary’s decision has already been up to the Supreme Court once – leading to a remarkable 2012 ruling in Salazar v. Patchak that the Administrative Procedure Act waived the sovereign immunity of the secretary and that Patchak had standing to challenge the secretary’s action. Unfortunately for Patchak, the secretary (presumably tiring of the litigation) obtained a federal statute that explicitly ratified the secretary’s decision and purported to end the litigation, stating among other things that “an action … relating to the land [in question] shall not be filed or maintained in a Federal court and shall be promptly dismissed.”

Patchak’s challenge to the statute culminated in this morning’s argument, in which his counsel Scott Gant maintained that the statute crosses constitutional limits on congressional authority over the judiciary by declaring the result in specific litigation.  If winning a case on that basis is like driving a camel through the eye of a needle, this particular needle will probably remain intact. Despite a bench flush with distinct theories about the general problem, none of the justices seemed to show the least interest in striking down this particular statute. 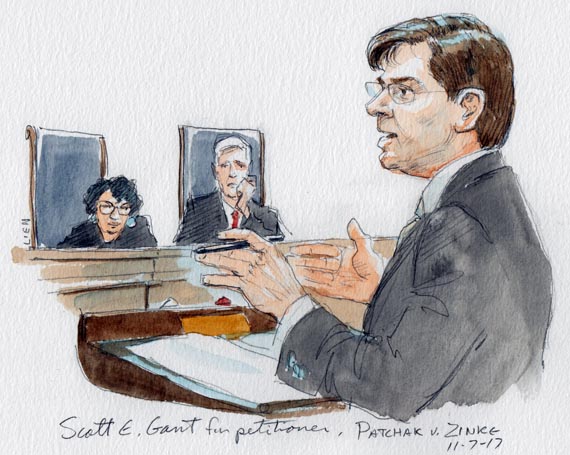 Scott E. Gant for the petitioner

Gant began his argument by focusing on the closing words of the statute, which state – in language that seems to be directing a result in a specific case – that any pending actions “shall be promptly dismissed.” The problem with that argument, though, is that it runs head-on into the Supreme Court’s long-standing rule (based on the 1869 decision in Ex parte McCardle) that Congress has power to “strip” the federal courts of jurisdiction. Channeling her days as a law professor, Justice Elena Kagan explained, “We know that Congress can alter the jurisdiction of the federal courts. And we know that Congress can alter that jurisdiction and apply it to pending cases. We’ve said that over and over again. So what … would make this unconstitutional if we assumed that this is a jurisdiction-stripping statute?”

Relying on last year’s decision in Bank Markazi v Peterson, Gant argued that what Congress had done was improper because it “dictated the outcome of the case without changing the law.” But Kagan had no patience for that contention:

Gant answered that the earlier part of the statute (stating that the action “shall not be filed or maintained”) is jurisdictional (and thus within Congress’ authority), but that Congress overstepped its authority when it explicitly directed dismissal of the action. At that point, Justice Neil Gorsuch interjected that Patchak can’t have a sensible complaint limited to Congress’ “directing the dismissal. [I]f that’s the only beef we have, is that really a beef at all because that’s a natural consequence of a jurisdiction-stripping statute as [in] McCardle itself, … so there’s nothing left. I think it’s almost a virtual quote from McCardle, right, there’s nothing left to be done but dismiss.  So where is the real beef here?”

Justices Ruth Bader Ginsburg and Samuel Alito seemed to take the same view, reading the statute as a straightforward example of conventionally permissible jurisdiction-stripping; both repeatedly pressed Gant to offer some explanation for a decision that would justify invalidating this statute without abandoning the century-long doctrine granting Congress authority in that area. As Kagan put it, “Why aren’t you saying that every time we said that, we were wrong; that any time Congress changes the jurisdiction of the federal court and then applies [it] to pending cases, that that’s a separation-of-powers issue?”

Justice Sonia Sotomayor went even farther. The parties and the justices for the most part took as common ground a discussion from Bank Markazi, suggesting (in Kagan’s rephrasing) that “if you had a piece of legislation that said in Jones v. Smith, Smith loses, that that would be unconstitutional.” Sotomayor, though, seemed to doubt that rule should apply at all in cases (like this one) to which the government is a party. Starting from the longstanding tradition that the sovereign has plenary control over its immunity from suit, she offered that as a basis for disposing of this particular case without addressing the jurisdiction-stripping implications of the specific language at issue:

I do think there’s a difference between the Congress coming in between two private parties and directing a result in favor of one private party. I think that’s a quintessential separation of powers question and a very, very serious one. But I think there is something fundamentally different about suits involving the government because … any suit against the government is a matter only of largesse and the government’s voluntary choice. We have repeatedly through the centuries said the government can at any moment take away its [abrogation of] sovereign immunity. …. So I see … less of a problem with separation of powers if … the government has withdrawn [its abrogation of] sovereign immunity than [in its] directing the outcome between private parties.

Several of the other justices, though, seemed much less comfortable with the sovereign-immunity point. At one point, for example, Chief Justice John Roberts commented to Ann O’Connell, who appeared on behalf of the government to defend the statute, that “on the sovereign immunity question, … that is the federal government sort of going nuclear. You know, … I’m like the king; you can’t sue me because I can do no wrong. And it seems to me there’s a real political accountability problem there because this statute doesn’t say anything about sovereign immunity.” Alito had a similar take on that point, doubting that the statute was specific enough to be read as reinstating the secretary’s sovereign immunity.

The most promising questions for Patchak came from Roberts, who seemed more concerned than any of the other justices about preserving the judiciary’s institutional integrity against potential congressional overreaching. So, for example, in an extended interchange with O’Connell, Roberts asked pointedly: “Does the government recognize any limit on Congress’s power to decide the result in a pending case?” When O’Connell offered the “Smith wins” hypothetical from Bank Markazi, he asked why that rule didn’t apply here. And when she argued that Congress had acted here by withdrawing jurisdiction rather than adopting a rule of decision, he retorted: “So Congress has plenary authority to insulate itself from separation of powers arguments? A statute that says in any case in which a statute is alleged to violate the separation of powers, federal courts have no jurisdiction. You think that’s okay?” 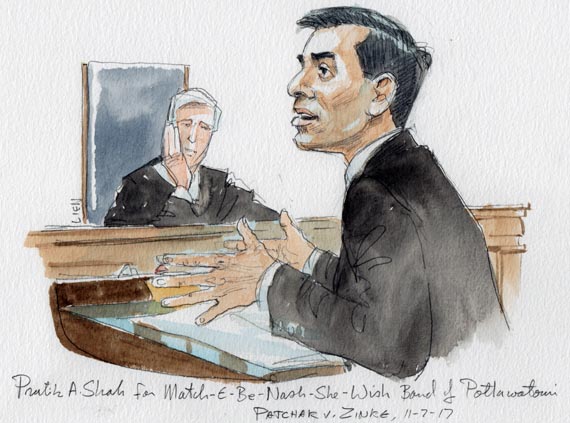 For Roberts, the case raised a more fundamental question, familiar to any reader who has taken a law-school course in federal courts, described by Roberts as “a famous dialogue between Professors Wechsler and Hart about whether Congress can achieve unconstitutional objectives by preventing federal courts from adjudicating claims that those provisions are unconstitutional.” As he pointed out, “during the civil rights era, there were a lot of proposals in Congress that said the federal courts have no jurisdiction over any case in which busing is sought as a remedy. And those types of proposals are consistently submitted whenever Congress attempts to achieve an unconstitutional result by depriving the federal courts of jurisdiction.” Returning to that point repeatedly, he seemed most reluctant to let the case rest solely on the jurisdiction-stripping point, remarking late in the argument that he finds Congress’ authority in that area “a real difficult question.”

As I suggested at the outset of this post, today’s argument revealed no serious indication that any of the justices wants to invalidate the particular statute about which Patchak complains. But because these cases tread so close to the court’s own institutional role, the justices take very seriously the problem of trying to describe exactly what types of congressional activity they will tolerate. I think all of the justices would regard this case as pretty close to the boundary of congressional authority, so the likelihood that they will coalesce on any broad statement validating the statute is slim. It is safe to expect an outcome typical of the Roberts court: either a brief, narrow and uninformative opinion joined by all or almost all of the justices, or a series of separate opinions airing the various justifications for tolerating what Congress has done.