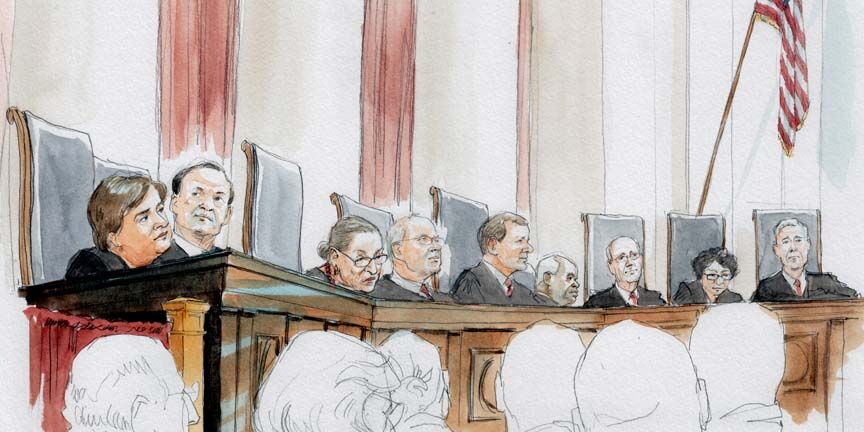 Perhaps a week with only two cases on the argument calendar gave the justices more time to prepare than normal. They certainly seemed to come to the argument in Merit Management Group v FTI Consulting with a strong predisposition about how to decide the case.

As I explained in more detail in my preview, the case involves the “avoidance” powers of the bankruptcy court, which generally permit the court to recover (“avoid”) dubious payments that bankrupts make before their bankruptcy filings. The provisions are intricately drafted, with numerous detailed exceptions – excellent terrain for law-school exam questions! This case involves a “safe harbor” exception that protects transactions in the securities industry; that provision bars recovery of any “settlement payment” made under a “securities contract” if the payment is made “by or to” a financial institution. The transaction here involved a transfer of assets between parties that were not themselves financial institutions; to make the transfer, the assets had to pass through a financial institution. The U.S. Court of Appeals for the 2nd Circuit has held for many years that those “conduit” payments are protected from avoidance; the U.S. Court of Appeals for the 7th Circuit in this case disagreed.

From the earliest moments of the argument, it seemed clear that the justices were skeptical of the 2nd Circuit’s position. Brian Walsh rose first, arguing that the securities exception protected Merit Management, the recipient of the payment. But before Walsh could get to his third sentence, Justice Anthony Kennedy interrupted to ask why an exemption protecting a settlement payment should be relevant if “that’s not the transfer … that the trustee seeks to avoid.” When Walsh explained his view that the exception protects securities-related payments whenever they happen to be made through a financial intermediary, Justice Ruth Bader Ginsburg cut him off sharply to ask, “why should it matter whether the transmission was through the banks rather than handed over [directly]?”

Walsh insisted that the provisions were designed to protect the securities industry, but an incredulous Justice Sonia Sotomayor quickly broke in to comment:

I understood that the safe harbor was not intended to protect people involved in financial transactions. … If Congress wanted to do that, why bother even creating the fraudulent transfer provisions? Just say any contract that any of these people sign in any of these fields is exempt.

Moments later, Justice Samuel Alito took the discussion back again to the same simple question from which Kennedy had started: “So why shouldn’t the … exemption be applied to the transfer that the trustee is seeking to avoid, as opposed to intermediate transfers that … are not constructively fraudulent?”

Justice Stephen Breyer weighed in a few moments later, trying out a hypothetical that he regarded as “the paradigm case of a fraudulent conveyance,” in which “knowing I’m about to go bankrupt, I take my share [in a company], and I tell them go transfer it to my wife.” When Walsh confirmed that his reading of the statute would exempt that transaction, Breyer commented ominously: “So this … is going to cover all kinds of things.”

I could go on, but suffice it to say that by the time Walsh sat down, each of the justices other than the characteristically taciturn Justice Clarence Thomas had taken a turn challenging Walsh’s position. It is common, of course, after the justices have dealt harshly with the first attorney to appear before them, for them to turn about and question counsel on the opposing side just as aggressively.  But not this time, as the justices showed no interest in challenging Paul Clement, who argued on behalf of the creditors seeking to recover the payment.

Rather, the justices spent most of Clement’s time debating exactly what an opinion in his favor should say. Kennedy, for example, worried about the proper bounds of such a ruling: “Well, if we’re writing the opinion to accept your proposition, how do we qualify it?” Similarly, the justices wondered whether there is any substantial difference between Clement’s position and the position presented in an amicus brief by a group of law professors (probably not).

The most interesting interchange came close to the end of the argument, when Justice Elena Kagan, a former solicitor general, asked Clement, also a former solicitor general, if he had any idea why the government did not participate in the case: “I’ve never seen a bankruptcy case, maybe ever, but certainly a bankruptcy case like this one, in which we do not have a Solicitor General brief.” Clement was understandably unable to shed light on the government’s decision not to file, though he did comment that “if what we were urging on you was really a catastrophe for the markets or something else, boy, I sure think the SG would be here … waving at least a yellow flag.”

My preview suggested that the justices would view this as a straightforward textual case, and the argument suggests that they’ve coalesced around a decision affirming the decision of the 7th Circuit. Considering the court’s light argument calendar this fall, we can expect an opinion in this one long before spring.