A “view” from the courtroom: A big windup on partisan gerrymandering 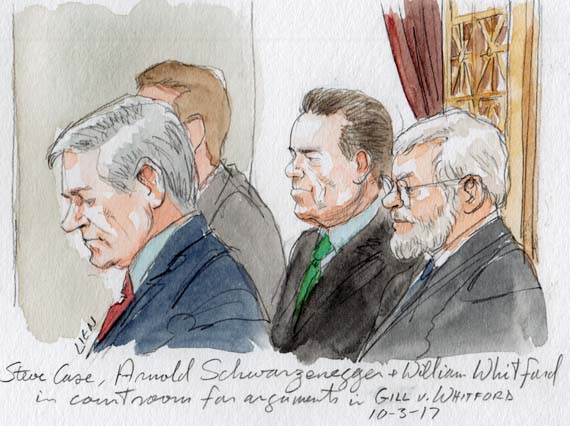 There is some extra wattage here this morning for arguments in one of the marquee cases of the new term, Gill v. Whitford, about the constitutionality of partisan gerrymandering.

Former California Gov. Arnold Schwarzenegger, a Republican who has also appeared in a few movies, is here today, seated in the second row of the public gallery. He has become active in the effort to eliminate political gerrymandering, employing several of his popular catchphrases.

He has a Crowdpac website called Terminate Gerrymandering, and he will repeat several times today before the media and a crowd outside the court, “It’s time to say ‘hasta la vista’ to gerrymandering.”

In the courtroom this morning, before argument has begun, Schwarzenegger is in conversation with William Whitford, a retired law professor from the University of Wisconsin at Madison who is the lead plaintiff in the challenge to Wisconsin’s 2011 legislative map. A federal district court invalidated the map last year as a partisan gerrymander, and the case is here on direct appeal.

Whitford is among several individuals who will be singled out from the bench this morning for one point or another.

In front of Whitford is Sen. Tammy Baldwin, Democrat of Wisconsin. Whitford will tell me later that he once taught Baldwin at his law school, and that before the argument he considered quizzing his former student about some of the fine points of the case.

Not far away is Steve Case, the co-founder and former CEO of AOL, who now runs a Washington venture capital firm called Revolution LLC. Case espouses various ideas on business entrepreneurship and citizenship in speeches and books, but it is not immediately clear if a particular interest in partisan gerrymandering has brought him here today.

Among those present from the other side of the case, defending Wisconsin’s map, are state Attorney General Brad Schimel, a Republican, and state Sen. Scott Fitzgerald, a Republican who is majority leader of his chamber.

The justices take the bench at 10 a.m. and move immediately to bar admissions. Chief Justice John Roberts recognizes Paul Smith, who will argue the case for the challengers to the map, to move the admission of Nicholas Stephanopoulos of the bar of New York.

Stephanopolous, seated in the front row of the bar section, is a law professor at the University of Chicago who is the co-author of a law review article that is integral to the case, “Partisan Gerrymandering and the Efficiency Gap.”

The other co-author, Eric McGhee, a political scientist with the Public Policy Institute of California, is apparently also here today. He has posted his guest ticket to the bar admissions ceremony on his Twitter account. Such a ticket guarantees a spot for that morning’s arguments, as well. That is a good thing for McGhee, because not only is he acutely interested in the case, he will be invoked by name from the bench a little later.

When it comes to the argument, Amy Howe has the main account. Most would agree that the hour more than lives up to its billing.

During that hour, Schwarzenegger will listen raptly, laughing along with others when Justice Anthony Kennedy makes a quasi-humorous reference to standing, and smiling when Justice Stephen Breyer tells Wisconsin Solicitor General Misha Tseytlin, “So let me spend exactly 30 seconds” formulating an observation and a question about “all that social science stuff and the computer stuff” involving redistricting.

After Breyer goes on for well over 30 seconds, the chief justice peers up at the clock that faces the bench, then turns and whispers to Kennedy. When Breyer finally does wrap up his four-pronged question, Roberts sends him a note, which elicits a smile from Breyer and a return note.

To digress for just 30 seconds, today’s bench notes remind me that I’ve been looking for an opportunity to register my thoroughly anecdotal, unscientific observation that note-passing among the justices seems to be a fading art.

This is based chiefly on the collection of bench memos kept by the late Justice Harry Blackmun, which suggest that in Blackmun’s early years in the 1970s, the justices were passing notes as often as a class of fifth-graders.

The most famous of those, of course, was highlighted by Linda Greenhouse in her book “Becoming Justice Blackmun.” It was a note passed to Justice Potter Stewart by one of his law clerks (but kept by Blackmun and added to his collection). It came on an early October day in 1973 that was particularly momentous for U.S. politics and the Major League Baseball playoffs. The note read:

Stewart was a fan of the Reds, who would lose that National League Championship Series to the Mets. And wouldn’t it be nice to have playoff baseball going on when the justices are on the bench?

Back to October 2017, Justice Samuel Alito questions Smith about the scholarly article promoting the efficiency gap as, in Alito’s words, the “Rosetta stone” for formulating a constitutional standard to weigh partisan gerrymandering.

Justice Alito refers to McGhee as the author of the paper, even though Stephanopoulos has equal billing as a co-author and is sitting just 10 or 12 feet away from the bench.

Alito discusses the paper at length, lays out a question raised by one of the district judges below about how to calculate the efficiency gap, and says that McGhee’s answer is, “Well, I have an answer to this, and I have a forthcoming paper and I’ll answer it in the forthcoming paper.”

After this long windup, Smith says, “Is there a question there, your honor?” He says it not in an evasive way, but with a smile. Even the chief justice, who has had some tense exchanges with Smith in past First Amendment cases, smiles at this.

Alito, with a slight smile himself, says, “Yes, there is a question there. There’s about 10 of them.”

The argument will go on, with more than one justice referring to the social science surrounding gerrymandering as “gobbledygook.”

Justice Neil Gorsuch will tell Smith that the search for a standard for too much partisan gerrymandering “reminds me a little bit of my steak rub.”

“I like some turmeric, I like a few other little ingredients, but I’m not going to tell you how much of each,” Gorsuch says. “And so what’s this court supposed to do, a pinch of this, a pinch of that?”

Toward the end, though, the argument takes a loftier turn. The chief justice tells Smith that he is worried that if this partisan gerrymandering claim is allowed to proceed, “there will naturally be a lot of these claims around the country.”

“And every one of them will come here for a decision on the merits,” says Roberts, who questions whether the average person will understand that the court is deciding such cases based on a complex efficiency-gap calculations.

“And the intelligent man on the street is going to say that’s a bunch of baloney,” Roberts says. “It must be because the Supreme Court preferred the Democrats over the Republicans. … And that is going to cause very serious harm to the status and integrity of the decisions of this court in the eyes of the country.”

Smith replies that the nation is on the cusp of a “more serious problem as gerrymandering becomes more sophisticated with computers and data analytics and an electorate that’s very polarized and more predictable than it’s ever been before.”

“If you let this go,” Smith continues, “if you say … we’re not going to have a judicial remedy for this problem, in 2020, you’re going to have a festival of copycat gerrymandering the likes of which this country has never seen.”