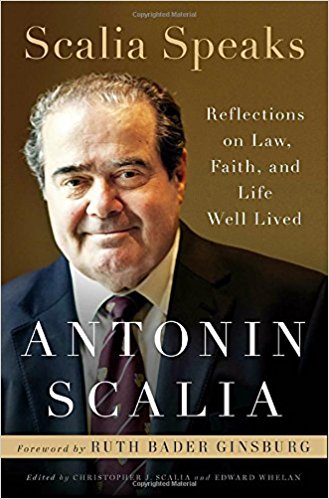 What makes an American is not the name or the blood or even the  place of birth, but the belief in the principles of freedom and equality that this country stands for.

If one would know Justice Oliver Wendell Holmes, one must read his memorable speeches, especially his Civil War addresses. The same holds true for Justice Antonin Gregory Scalia: If you would know Scalia the man, read “Scalia Speaks: Reflections on Law, Faith, and Life Well Lived.” In this volume, Christopher Scalia (one of the justice’s sons) and Edward Whelan (law clerk to Scalia for the October 1991 term) give posthumous voice to the late justice by way of a collection of 48 thematically organized speeches delivered between 1984 and 2014. The book’s eight parts – concerning law, life, learning, faith, virtue, friendship and more – show this immigrant son as an American proud of his heritage. Whatever side of the ideological divide one stands on, it is hard not to take heed of what Scalia said in a 1986 speech, the one offered up as the lead in this anthology:

[O]ur attachment to and affection for our particular heritage does not drive our society apart, but helps to bind it together. Like an intricate tapestry, the fabric of our society is made up of many different threads that run in different directions, but all meet one another to form the whole.

And then this: “[W]e should not fail to be grateful for what America has given to us. It has given us, first and foremost, a toleration of how different we were when we came to these shores.”

That ethos echoes through the book, as Scalia speaks about the nation he loved, the education he valued, the courage of others he esteemed, the faith he cherished, the law and freedom he treasured, and the heroes and friends he venerated. Whether in a speech to students at his alma mater (Xavier High School in New York City), or in his remarks at Wesleyan University (to deliver the Hugo Black Lecture on freedom of expression), or in his words to members of B’nai B’rith in Washington, D.C., time and again the voice of the man leaps from the pages.

Future biographers would be well served to study these speeches, because they allowed Scalia, says Christopher, “to reveal insights into his personal feelings,” enabling historians to paint a more revealing portrait of the man behind the constitutional curtain.

In a foreword, Justice Ruth Bader Ginsburg adds her own perspective to that portrait, describing the friend she admired despite their jurisprudential differences. Ginsburg makes an important and timely point about a friendship many have remarked on with surprise: “If our friendship encourages others,” she stresses in her foreword, “to appreciate that some very good people have ideas with which we disagree, and that, despite differences, people of goodwill can pull together for the wellbeing of the institution we serve and our country, I will be overjoyed, as I am confident Justice Scalia would be.”

“Scalia Speaks” enters a scene crowded with writings on the late justice’s life and thought. Beyond the biographies already published by Joan Biskupic, Bruce A. Murphy and James Staab, there are no fewer than four new or forthcoming books on the justice:

Recent print symposia have been published in the Notre Dame Law Review and in The British Journal of American Legal Studies, with yet others likely to be published.

“Scalia Speaks” – a skillfully selected and well-stitched anthology consisting of many never before published speeches — offers a unique and useful addition to the Scalia section of the library. This rich repository includes everything from a Law-Day type of speech (“The Vocation of a Judge”), replete with its firm admonitions, to farewell remembrances of those the justice loved (“Emerson G. Spies”), replete with tender words. There are confessions of faith (“Being Different”), replete with the biblical story of the good thief, Dismas, and words about words (“Writing Well”), replete with well-crafted sentences. There are thoughts on clichés (“Legal Canards”), replete with the reasons why Scalia so abhorred them, and extended remarks on President Abraham Lincoln’s legal legacy (“Abraham Lincoln”), replete with laudatory references to the Cooper Union Speech. There is also a speech about judicial nominations (“The Crisis in Judicial Appointments”), which features a call to abandon the notion of “an ‘evolving Constitution.’”

And then there is the “On Law” section. Here Scalia, the jurist, proclaims his views on legal interpretation, congressional power, legislative history, foreign law, free speech and natural law. In these and other speeches, the editors tell us, the justice “convey[ed] his arguments more directly and more concisely” than in many of his judicial opinions. It is in such speeches that one will find a well stocked array of critical comments concerning:

Some delight in these words; others retreat from them. Some welcome such jurisprudential pushback; others resist it. Some view these ideas as canonical, others as heretical. But is this not yet another mark of a great jurist, the ability to provoke this hardy to-and-fro in American legal thinking?

In all of these ways and others, Scalia still speaks to us … and he may continue to do so for a long time to come.

Ronald Collins is the book editor for SCOTUSblog. He is the Harold S. Shefelman Scholar at the University of Washington School of Law. His latest book (with David Skover) is The Judge: 26 Machiavellian Lessons (Oxford University Press, 2017).