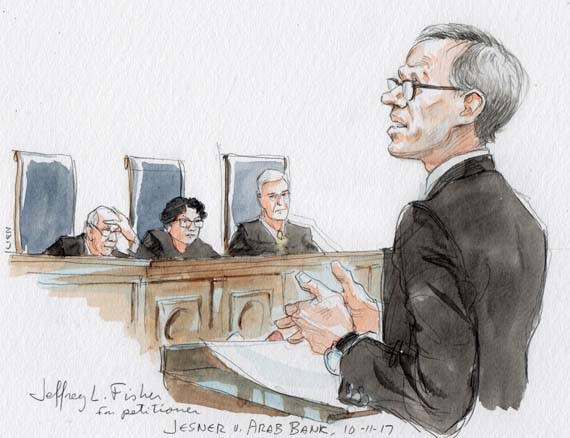 The Supreme Court was divided today on whether corporations can be held liable in U.S. courts under a federal law dating back over two centuries. After an hour of oral argument by three excellent advocates, and five years after they considered the question for the first time, several of the justices appeared to be ready to hold that the Alien Tort Statute does not allow lawsuits against corporations for serious violations of international law. Some of the other justices seemed to be trying to salvage a ruling that might eventually end this lawsuit while leaving the door open for some lawsuits against corporations, but it was not at all clear that they could garner five votes for that result.

The plaintiffs in Jesner v. Arab Bank are the victims of terrorist attacks that occurred over a 10-year period in Israel, the West Bank and Gaza. They allege that Arab Bank maintained accounts for known terrorists, accepted donations that it knew would be used to fund terrorism, and distributed millions of dollars to families of suicide bombers. They filed lawsuits under the Alien Tort Statute, a federal law that gives federal courts jurisdiction over “any civil action by an alien for a tort only, committed in violation of the law of nations or a treaty of the United States.” The ATS was enacted as part of the Judiciary Act of 1789 but was largely dormant for nearly 200 years, until a federal appeals court allowed a lawsuit against a former Paraguayan police official living in the United States to go forward on the ground that the complaint alleged torture, which violates the “law of nations.” Since then, the ATS has been frequently cited as the basis for lawsuits – against both foreign governments and multinational corporations – filed in U.S. courts seeking compensation for human-rights violations.

In 2004, the Supreme Court ruled that the universe of claims that can be brought under the ATS is limited to claims that are easily defined and commonly regarded as violations of international law. In making that determination, the justices added, courts should also consider “the practical consequences of” allowing a claim to go forward, along with whether international law would allow a particular defendant to be held liable for violating it. Eight years later, the court agreed to decide the question at the center of this case: whether corporations can be held liable under the ATS. After oral argument in that case, though, the justices asked the two sides to weigh in on whether the ATS allows lawsuits based on actions that take place in another country. In an opinion by Chief Justice John Roberts, the court concluded that the principles underlying the general presumption that U.S. law does not apply outside the United States also apply to the ATS.

Arguing for the plaintiffs, attorney Jeffrey Fisher contended that the text of the ATS leads to a “straightforward result”: a presumption that corporations can be held liable for violations of international law. Concerns about the effect that lawsuits like this one may have on the relationship between the United States and other countries, Fisher suggested, do not justify a categorical ban on lawsuits against corporations. And even when such concerns are valid, he continued, there are other legal theories – such as the presumption that the ATS does not apply to conduct that occurs outside the United States – that can be applied to address those concerns.

Justice Samuel Alito was doubtful that the potential foreign-relations implications of such suits could be so easily minimized. When courts are deciding whether to recognize claims under the ATS, he told Fisher, there will definitely be lawsuits that, if allowed to go forward, will create friction with other countries. But will there really be cases on the other end of the spectrum, Alito queried, in which dismissing the lawsuit will create foreign-relations problems?

Fisher later responded that the answer to Alito’s question was “yes,” telling the justices in his rebuttal that Israel – where several of the attacks that led to this lawsuit took place, and whose citizens are plaintiffs in the case – would certainly complain if the case were dismissed. But Roberts seemed to share Alito’s skepticism, telling Assistant to the Solicitor General Brian Fletcher (who argued on behalf of the United States) that the United States would likely be held “accountable” if it does provide a forum and a remedy in cases like this one. 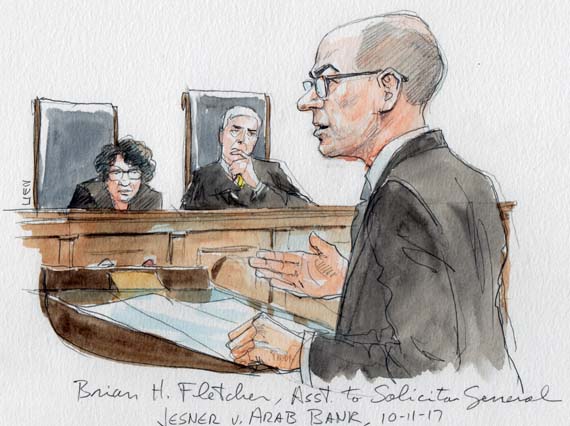 The court’s newest justice, Neil Gorsuch, was even more unsympathetic to the plaintiffs. He repeatedly pressed Fisher to explain whether the plaintiffs’ interpretation of the ATS was consistent with what Congress intended when it enacted the law in 1789, and he seemed unconvinced by Fisher’s answers. When Fisher at one point cited a seminal Supreme Court opinion from 1900 to bolster his argument, Gorsuch pushed back, asking Fisher how we could know whether that was the understanding of Congress in 1789.

A central issue at today’s oral argument was exactly how to characterize the court’s inquiry in this case: Should it look at whether there is a consensus that financing terrorism is generally accepted as a violation of international law, or instead at whether there is a consensus that corporations can be held liable for such violations? For Paul Clement, who argued on behalf of Arab Bank, the answer was the latter. And, he stressed repeatedly in his half-hour at the lectern, there is no specific and widely accepted norm of international law that would allow corporations to be held liable for financing terrorism. 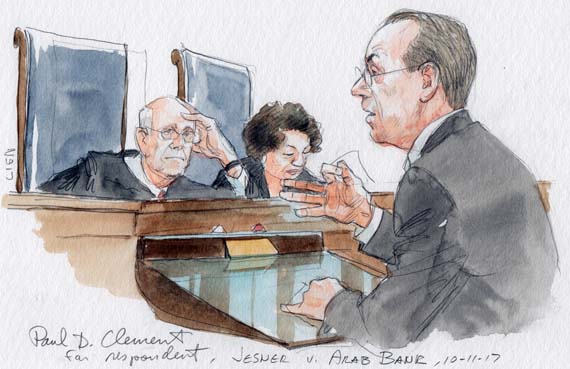 Justice Sonia Sotomayor did not agree. She told Clement that there is no specific norm for holding people liable either. The norm, she said, focuses on conduct – for example, should you or shouldn’t you finance terrorism or be a pirate?

Justice Elena Kagan echoed Sotomayor’s thoughts, telling Clement that the question of whether specific conduct constitutes a violation of international law is different from the question of who can be held liable for that conduct. Other countries’ views on the liability question are certainly relevant, she acknowledged, but where do you get the idea, she asked Clement, that there has to be consensus on the liability question?

Justice Stephen Breyer also seemed to be in the plaintiffs’ camp on this issue. If you have a rule of international law that prohibits the financing of terrorism, he asked somewhat rhetorically, to whom would it apply besides corporations and the occasional billionaire?

Perhaps most crucially, the bank found a friendlier audience in Justice Anthony Kennedy, who asked relatively few questions. Unlike Sotomayor, Kagan and Breyer, Kennedy seemed unpersuaded by the plaintiffs’ efforts to distinguish between conduct and who can be held liable for that conduct. Allowing corporate liability under the ATS does impose a norm, he told Fisher, because it tells corporations how to run their business. “Norms control behavior,” he repeated, and we would be saying that corporations “now must conform their behavior. That seems to me to be a norm.”

With Kennedy having possibly shown his hand, Kagan seemed to turn to triage, hoping to avoid a ruling that establishes a categorical bar on corporate liability, even if it comes at the expense of the plaintiffs in this case. “You have plenty of things to gripe about,” she told Clement: This is a “foreign-cubed” lawsuit – one involving foreign plaintiffs, a foreign defendant and conduct that largely happened overseas. But the question of corporate liability, she continued, is not one of them. Why on earth, she asked Clement, is there any reason to distinguish between an individual and corporation when it comes to who can be held liable? To hammer her point home, she offered a hypothetical involving a corporation that uses citizens of another country for slave labor in the United States. Was Clement really saying that the ATS would not provide a basis for a lawsuit in such a case?

Clement acknowledged that Kagan’s hypothetical was a “tough” one, but he countered that the slaves could sue the individuals responsible for their plight in the United States – who, he assured Kagan, would have sufficiently “deep pockets” to satisfy a judgment for the plaintiffs.

To the extent that Kagan’s goal was a ruling for the bank – for example, because the mere fact that the bank may have routed foreign transactions in dollars through its U.S. branch does not establish the kind of connection to the United States that the Supreme Court’s earlier cases require – that leaves the door open for lawsuits against other corporations in the future, it may be a tough sell. The United States had advanced a similar argument, but made little headway today with Roberts and Alito. Kagan may have been hoping that the argument would gain more traction with Kennedy, but we likely won’t know until next year whether she succeeded.