Colorado’s anti-discrimination law bars places of public accommodation – that is, businesses that sell to the public – from discriminating based on (among other things) sexual orientation. In 2012, Charlie Craig and David Mullins went to Masterpiece Cakeshop, a Denver-area bakery, to order a cake to celebrate their upcoming wedding. But the couple left empty-handed … and upset. Masterpiece’s owner, Jack Phillips, is a Christian who closes his business on Sundays and refuses to design custom cakes that conflict with his religious beliefs – for example, cakes that contain alcohol, have Halloween themes or celebrate a divorce. And because Phillips also believes that marriage should be limited to opposite-sex couples, he told Craig and Mullins that he would not design a custom cake for their same-sex wedding celebration. 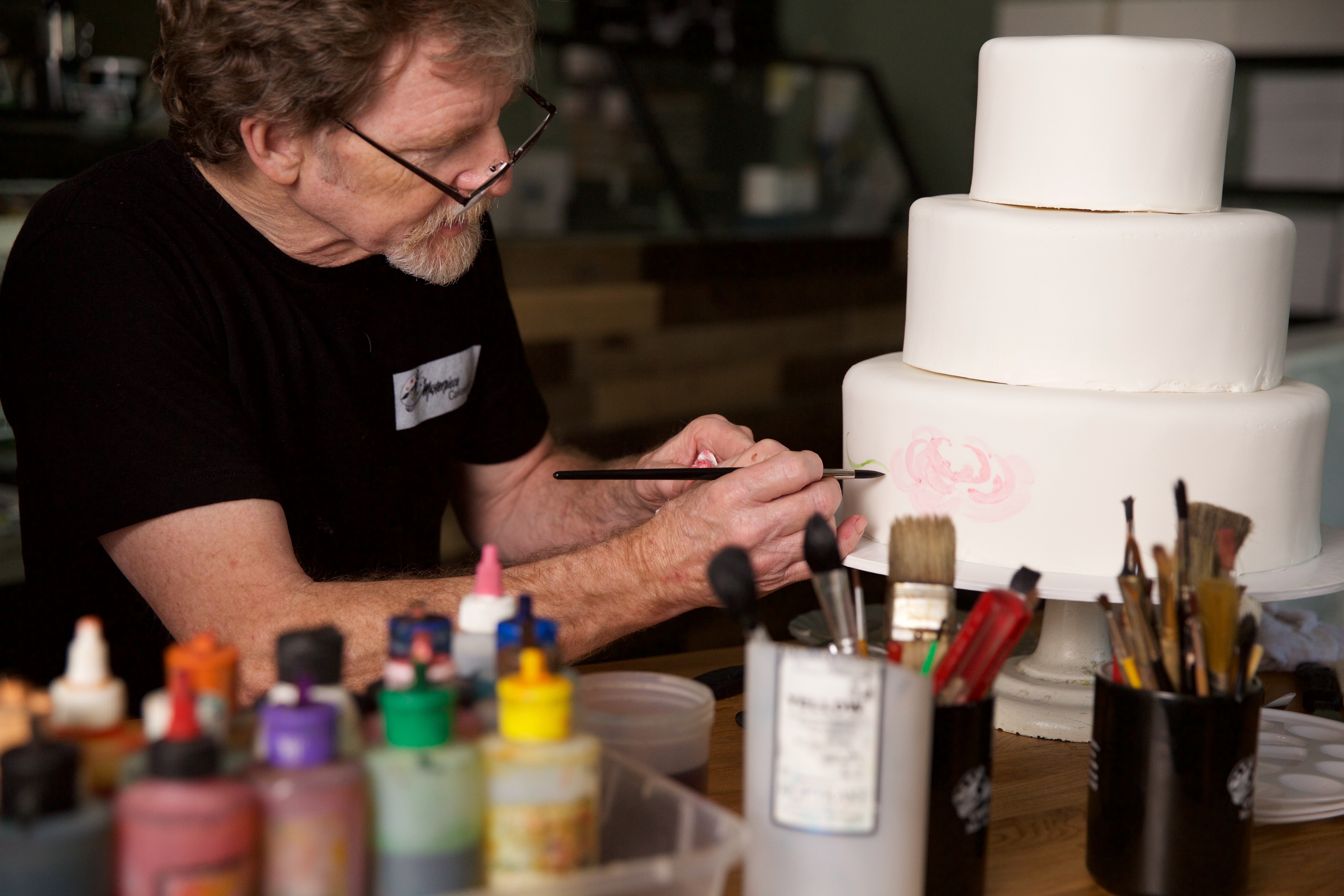 Craig and Mullins went to the Colorado Civil Rights Division, where they accused Phillips of discriminating against them based on their sexual orientation. The agency initiated proceedings against Phillips, who responded that he had turned down the couple not because of their sexual orientation as such, but because “he could not in good conscience create a wedding cake that celebrates their marriage.” The agency, however, dismissed that explanation as “a distinction without a difference,” and it ruled both that Phillips’ refusal to provide the custom cake violated Colorado anti-discrimination laws and that Phillips had “no free speech right” to turn down Craig and Mullins’ request. The Colorado Civil Rights Commission upheld that ruling and told Phillips – among other things – that if he decided to create cakes for opposite-sex weddings, he would also have to create them for same-sex weddings. A Colorado court affirmed, and Phillips asked the Supreme Court to take his case, which it agreed to do in June.

In his brief at the Supreme Court, Phillips depicts the legal battle as a pivotal one that threatens “his and all likeminded believers’ freedom to live out their religious identity in the public square,” as well as the “expressive freedom of all who create art or other speech for a living.” He stresses that the First Amendment protects expression, which is not limited to words but can also include visual art, from traditional paintings and movies to tattoos to stained-glass windows. The “expression” protected by the First Amendment also extends to Phillips’ wedding cakes, he says, even if they are made with “mostly edible materials like icing and fondant rather than ink and clay,” because they convey messages about marriage and the couple being married. And the First Amendment also bars the state both from requiring Phillips to design cakes bearing messages that violate his beliefs and from punishing him for refusing to create such cakes – particularly when Phillips could, if he supported same-sex marriage, refuse requests to design cakes that oppose it.

Because of the burden that Colorado’s public-accommodations law places on his religious beliefs, Phillips asserts, the law should be subject to the toughest constitutional test, known as “strict scrutiny.” But the state cannot meet that test, he continues. First, he contends, although the state “has an interest in ensuring that businesses are open to all people, it has no legitimate—let alone compelling—interest in forcing artists to express ideas that they consider objectionable.” And even if the state did have a compelling interest in making sure that same-sex couples have access to the services that they need to celebrate their marriages, he adds, the state’s efforts to enforce that interest sweep too broadly, because it has not shown that same-sex couples have had any trouble obtaining such services. To the contrary, he notes, Craig and Mullins received a free rainbow-themed custom cake from another local business.

Masterpiece has a number of allies – none more important than the Trump administration, which this week filed a brief supporting the bakery. The federal government argues that public-accommodations laws like Colorado’s will generally pass constitutional muster, because they normally only regulate discrimination in providing goods and services – conduct that is not protected by the First Amendment – rather than expression. For example, the government says, when wedding vendors rent out a banquet hall or a limousine, that is not a form of expression. And even if the vendors believed that they were expressing a message about marriage by renting out a venue or providing a chauffeured vehicle, others would not necessarily agree, nor would they necessarily pick up on that message.

But some laws will be subject to a more searching review, the government explains, if applying the law would either alter someone’s speech or compel that person to participate in an event that conflicts with his beliefs. The government maintains that, at least in this case, Colorado’s public-accommodations law triggers that more searching review because it compels Phillips to create custom cakes for same-sex marriage celebrations, which (depending on the cake) can be either actual speech or, at a minimum, the kind of expressive conduct that conveys a message to others, without allowing Phillips to make clear that he does not share his customers’ viewpoints on same-sex marriage. Moreover, Colorado does not have a sufficiently strong interest to justify infringing on Phillips’ religious beliefs, particularly because same-sex marriage was not even legal in Colorado when Craig and Mullins asked Phillips to create a cake. Indeed, the federal government emphasizes, this is a far cry from the kind of discrimination that the public-accommodations law was designed to combat: The Supreme Court itself has acknowledged that “opposition to same-sex marriage ‘long has been held—and continues to be held—in good faith by reasonable and sincere people.’”

The state and Craig and Mullins counter that there is no constitutional problem because the public-accommodations law targets only conduct, not speech: The law makes clear that when businesses sell products or services to the public, they cannot discriminate against some members of that public based on, for example, their sexual orientation. The state and couple dismiss Phillips’ argument that the application of the public-accommodations law to him effectively compels him to speak out in favor of same-sex marriage. They maintain that no “reasonable observer would understand the Company’s provision of a cake to a gay couple as an expression of its approval of the customer’s marriage, as opposed to its compliance with a non-discrimination mandate” – especially because Masterpiece is also required to post a sign indicating that the law bars discrimination based on, among other things, sexual orientation. Indeed, they point out, Masterpiece could even use its own sign to make clear that providing baked goods for an event does not constitute endorsement of that event. And the law does not impinge on Phillips’ right to exercise his religion, they insist, because the Supreme Court has ruled that the free-exercise right “does not include a right to disobey neutral and generally applicable laws, including non-discrimination laws.”

The implications of a ruling for Masterpiece, the state and the couple suggest, would be sweeping, far beyond the “countless businesses” such as hair salons, tailors, architects and florists that “use artistic skills when serving customers or clients.” They contend that a wide range of businesses could “claim a safe harbor from any commercial regulation simply by claiming that [they] believe[] complying with the law would send a message with which [they] disagree[].” Such an outcome, they conclude, would “eviscerate” the government’s ability, including through labor and health laws, to regulate all kinds of transactions.

In 2014, the Supreme Court turned down a request by a photography studio to review a New Mexico Supreme Court decision holding that the studio violated the state’s anti-discrimination laws when it refused to photograph a same-sex commitment ceremony. The petitioners in that case, Elane Photography v. Willock, argued that taking those photographs would violate their religious beliefs, but – after considering the petition at three consecutive conferences – the justices declined to weigh in. Many court-watchers believed that Phillips’ case might meet a similar fate: If the photography studio couldn’t muster the four votes needed to grant review while the late Justice Antonin Scalia was still on the court, Phillips presumably also would not be able to do so even once Scalia’s successor, Justice Neil Gorsuch, took the bench. But after considering the case at 15 conferences, the justices announced on June 26 that they had granted Phillips’ petition.

The case is likely to be scheduled for oral argument during the court’s December sitting; that oral argument could give us more insight into the justices’ apparent change of heart and how they view Phillips’ claims.