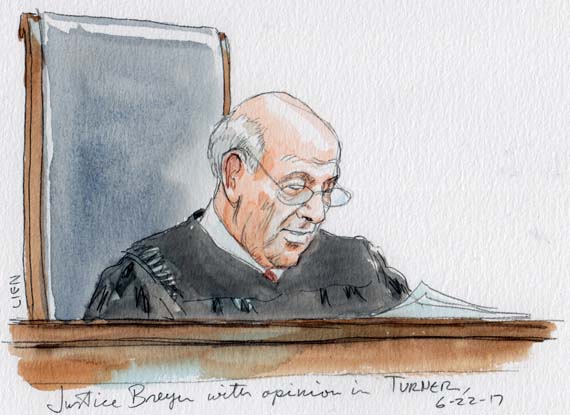 This morning the justices upheld the convictions of seven men who had been convicted of the brutal beating, sodomy, and murder of Catherine Fuller, a District of Columbia mother of six, in 1984. Writing for the court in Turner v. United States, Justice Stephen Breyer concluded that even if the prosecutors had given the defense attorneys evidence that would have been helpful to the men, the jurors likely would have reached the same result.

The Supreme Court rarely weighs in on cases that are “legally simple but factually complex.” This is in no small part because the relatively few cases that the justices review often make their way to the court after the lower courts have reached different decisions under the same legal principle, and the justices want to make sure that their opinions establish clear legal principles that can govern the thousands of cases argued in the lower courts each year. But “legally simple but factually complex” is exactly how Breyer described the issue before the court today.

Because the government did not dispute that the evidence that had been withheld was favorable to the defendants, the only question before the court, Breyer emphasized, was whether the evidence was “material” – that is, that “there is a reasonable probability that, had the evidence been disclosed, the result of the proceeding would have been different.” But, Breyer concluded, the men cannot make this showing. The men’s primary argument, he observed, is that the prosecutors should have given them information about the identity of James McMillan, another man who had been spotted in the alley and was convicted of a similar crime seven years later, as well as a statement by Willie Luchie, who walked through the alley around the time of the murder. If they had received that information, the men contended, they could have “challenged the Government’s basic theory that Fuller was killed in a group attack.”

But when the withheld evidence is considered along with the rest of the evidence before the jury, Breyer explained, “it is too little, too weak, or too distant from” the other evidence to have made a difference. The fact that McMillan had been seen in the alley, Breyer reasoned, would only matter if there had not been a group attack. The same is true, Breyer suggested, for “Luchie’s ambiguous statement that he heard groans but saw no one” in the garage where Fuller’s body was found. This is particularly true, Breyer continued, when (among other things) two other men had confessed to participating in the crime and had testified against the defendants in exchange for a shorter sentence, and other witnesses had confirmed parts of that testimony.

Justice Elena Kagan dissented from the decision, in an opinion joined by Justice Ruth Bader Ginsburg. Kagan acknowledged that the court’s “conclusion is not indefensible: The Government put on quite a few witnesses who said that the defendants committed the crime.” But Kagan would have reached a different result, because in her view “the whole tenor of the trial would have changed” if the prosecutors had provided the defense lawyers with the evidence that had been withheld. She explained that the jury could have been presented with two very different cases. In the one that the jury actually heard, she suggested, the defendants had “formed something of a circular firing squad” in which each defendant tried to save himself at the expense of his co-defendants. But if they had received the evidence that the prosecutors had suppressed, she wrote, the defendants could have pulled together to show that someone else – such as McMillan – had actually committed the crime. If they had done that, she concluded, “one or more jurors could well have concluded that the Government had not proved its case beyond a reasonable doubt.”

Given the heavily fact-intensive nature of the case, it’s hard to know exactly why the justices agreed to review it in the first place. The lack of a compelling legal question was apparent to them from the outset: When they announced that they would hear the case on the merits, the justices asked the parties to brief only one, straightforward question: whether the men’s convictions must be set aside under Brady v. Maryland, which requires the government to turn over evidence that could exonerate the defendant. Although we may never know for sure, one possibility is that the justices granted review to overturn the convictions because, at least at that stage of the proceedings, the men’s cases seemed so compelling. But on further review, they may have seemed significantly less so – particularly after the oral argument, at which deputy solicitor general Michael Dreeben’s extraordinary command of the facts allowed him to weave a forceful presentation on behalf of the government. The justices often say that oral argument rarely makes a difference in the outcome of a case, but this case may have been the exception.