Opinion analysis: Justices throw out most claims against federal officials in post-September 11 case 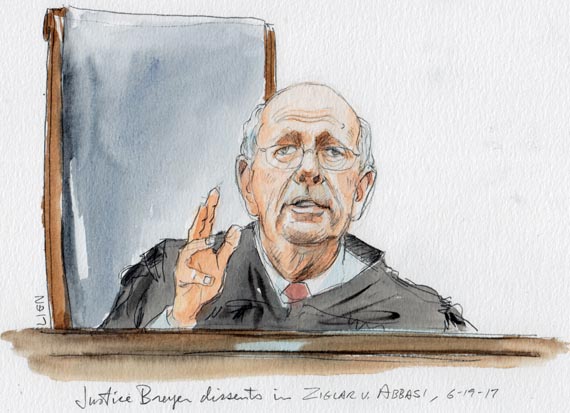 During the almost 16 years since the September 11 attacks, litigation challenging the treatment of Middle Eastern men who were in the United States illegally at the time of the attacks and were detained for immigration violations has continued to wind its way through the courts. Several of those detainees, who are the plaintiffs in Ziglar v. Abbasi (along with two other related cases) filed a lawsuit against a group of federal officials: former U.S. attorney general John Ashcroft, former FBI director Robert Mueller, and James Ziglar, a former commissioner of the Immigration and Naturalization Service, and the wardens at a detention center where the men were being held. The detainees alleged that the federal officials knew that the detainees did not have any ties to terrorism but still held them in “unnecessary and punitive conditions of confinement.”

Acknowledging that, if these allegations are true, the treatment of the detainees “in the days following September 11 was tragic,” the Supreme Court nonetheless put a halt to all but one of the detainees’ claims, which it sent back to the lower court for further consideration. The court’s ruling today prompted Justice Stephen Breyer to read his dissent (joined by Justice Ruth Bader Ginsburg) from the bench – perhaps a recognition that the ruling not only foreclosed lawsuits by individuals like the detainees in this case but also made it harder for many others alleging unconstitutional treatment by federal officials to sue for money damages in the future.

Both the court’s ruling and Breyer’s dissent hinged on the Supreme Court’s 1971 decision in Bivens v. Six Unknown Federal Narcotics Agents, which held that a violation of the Fourth Amendment by federal government officials could give rise to a lawsuit for damages. The two dueling opinions reflected very different takes on how closely the claims resembled other claims that have been allowed to go forward under Bivens, and what that ultimately means for the claims’ viability.

In an unusual twist, only six of the nine justices participated in today’s decision. Both Justice Sonia Sotomayor – who was involved in the case when she sat on the U.S. Court of Appeals for the 2nd Circuit – and Justice Elena Kagan – who was involved in the case when she served as the U.S. solicitor general – sat out the oral argument; the court’s newest justice, Justice Neil Gorsuch, had not yet joined the bench (or even been nominated) when the case was argued in mid-January of this year. Justice Anthony Kennedy therefore wrote for a four-member majority, which characterized the detainees’ claims as a “disfavored” effort to extend Bivens – something that the court has not done, he noted, for the past 30 years. Joined by Chief Justice John Roberts and Justices Clarence Thomas and Samuel Alito, Kennedy reasoned that the plaintiffs’ claims challenging the conditions of their detention “pursuant to a high-level executive policy created in the wake of a major terrorist attack on American soil” “bear little resemblance to the three Bivens claims the Court has approved in the past.”

Because of this dissimilarity, the court continued, the court of appeals should have considered whether there are any “special factors” that would caution against allowing the plaintiffs’ suit for damages to go forward. Here, for example, the plaintiffs are essentially challenging a broader government policy, which would require “inquiry and discovery into the whole course of the discussions and deliberations that led to the policies and governmental acts being challenged.” That could in turn intrude on the ability of government officials to do their jobs effectively, and require courts to intrude on “sensitive functions” of the executive branch – including, perhaps most crucially, national-security policy. When all of these factors are taken into account, the court explained, they point to the conclusion that Congress, rather than the courts, should decide whether such claims are permissible.

To bolster this conclusion, the majority noted that Congress was well aware of the conditions in the detention center where the plaintiffs were being held, but it had never provided the detainees with a right to damages to compensate for their treatment. Congress’ failure to do so, the majority suggested, “is telling.”

The majority also stressed that, unlike Bivens and some of the other cases in which the court has allowed claims for damages, this decision will not leave the plaintiffs without any remedy at all. Detainees like the plaintiffs can sue to stop or change the policies being challenged, or “they might be able to challenge their confinement conditions” in federal court through a writ of habeas corpus – an order to require the officials holding them to show that their detention is valid. Indeed, the court observed, seeking habeas corpus “would have provided a faster and more direct to relief than a suit for money damages.”

The majority recognized the “persisting concern” that “absent a Bivens remedy there will be insufficient deterrence to prevent officers from violating the Constitution.” But, it continued, there is a “balance to be struck, in situations like this one, between deterring constitutional violations and freeing high officials to make the lawful decisions necessary to protect the Nation in times of great peril.” That balance, the court made clear, is one for Congress rather than the courts to work out.

One of the detainees’ claims survived, at least for now: their claim that one of the wardens at the detention center violated the Constitution by allowing prison guards to abuse them. The court agreed that the detainees’ claims had “significant parallels” to a 1980 case in which the court had allowed a Bivens claim for prisoner mistreatment to go forward. But, it added, “even a modest extension” of Bivens “is still an extension.” Because the court of appeals had not considered whether any “special factors” would counsel against allowing a Bivens remedy, the Supreme Court sent the case back for it to do so now.

In contrast with the majority, Breyer contended that allowing the detainees’ claims to go forward would not be an extension of Bivens at all, because those claims allege “familiar” injuries and are not “fundamentally different” from earlier Bivens claims.

But even if the detainees’ claims would extend Bivens, Breyer added, they should still be allowed to go forward. First, despite the majority’s suggestion to the contrary, he maintained, there aren’t really any other remedies available to the detainees in this case. Even assuming that the detainees could have gotten before a court at all, neither a court order nor a writ of habeas corpus will do anything to redress the injuries that have already been inflicted. Second, he continues, there is no reason to interpret Congress’ silence as foreclosing additional Bivens remedies; if anything, Congress’ reticence suggests that it had “accepted Bivens actions as part of the law.”

Finally, Breyer turned to what he deems the majority’s “strongest argument”: “that Bivens should not apply to policy-related actions taken in times of national-security need.” Even that argument, in Breyer’s view, is not enough to block claims like the detainees’ in this case. Breyer reasoned that there are “many legal safeguards” in place to protect against the concerns that the majority articulates – first and foremost, the fact that the Constitution “itself takes account of public necessity.” “What is unreasonable and illegitimate in time of peace may be reasonable and legitimate in time of war,” Breyer wrote. Moreover, he added, officials can argue that they are immune from lawsuits when the constitutional right at issue was not “clearly established,” and courts have imposed fairly high standards to survive a motion to dismiss.

“Given these safeguards,” Breyer concluded, “the Court’s abolition, or limitation of, Bivens actions goes too far. If you are cold, put on a sweater, perhaps an overcoat, perhaps also turn up the heat, but do not set fire to the house.” If anything, Breyer added, there may be more of a need for Bivens actions in times of war or national security threats, because courts may be reluctant to step in during the middle of a crisis and interfere with policies set by the executive branch. But once the crisis has been averted, the people affected by the government’s actions should then be able to bring a lawsuit for damages, as courts “have more time to exercise such judicial virtues as calm reflection and dispassionate application of the law to the facts.”