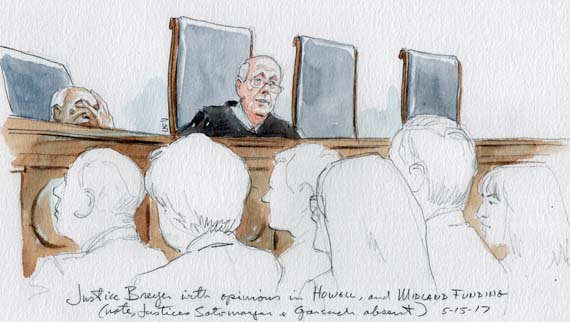 Today’s opinion in Howell v. Howell exemplifies the bread and butter of the Supreme Court’s docket: It is a decision with significant real-world consequences that will nonetheless largely fly under the radar. The court unanimously handed a victory to Air Force veteran John Howell, who was divorced from his former wife, Sandra, over 25 years ago. Although the divorce decree had ordered John to share half of his retirement pay with Sandra, John later opted to waive part of that retirement pay (on which he pays taxes) to instead receive disability benefits (which are not taxable), thereby reducing the money that Sandra received. The justices today ruled that John cannot be required to reimburse Sandra for the $125 per month that she no longer gets as a result of his choice.

The dispute before the court has its roots in John and Sandra Howell’s 1991 divorce. With John’s retirement only a year away, the couple’s divorce decree specified that Sandra would receive half of his military retirement pay. But in 2005, John gave up $250 of his $1,500 in retirement pay so that he could receive the same amount as disability benefits. Sandra went back to court, where she argued that, even if John’s retirement pay had been reduced, she should still receive half of what his retirement pay would have been without the disability benefits. The state courts agreed with her, but today the Supreme Court reversed, in a decision by Justice Stephen Breyer.

For the eight justices (Justice Neil Gorsuch joined the court after the case was argued and did not participate), the ruling hinged on the Uniformed Services Former Spouses’ Protection Act, a 1982 federal law governing the disposition of military retirement pay in divorces, and a 1989 Supreme Court case interpreting that statute. The act makes clear that state courts can divide up “disposable retired pay,” which it defines as the service member’s retired pay, minus any portion of that pay waived in favor of disability benefits. And in Mansell v. Mansell, the court ruled that the act does not permit state courts to treat retirement pay that has been waived to receive veterans’ disability benefits as something that can be divided.

John had argued that the act and the court’s decision in Mansell easily resolved this case, while Sandra told the justices that this case is different because the veteran in Mansell had waived his right to military retirement pay before the divorce. The justices agreed with John, explaining that under federal law state courts simply lack the authority to divide up John’s disability benefits, even if it means that Sandra winds up receiving less money than she might have originally expected. And the state can’t get around the restrictions imposed by federal law by characterizing the award to Sandra as an order to John to “reimburse” her for the money that she no longer receives.

Breyer acknowledged that the federal statute and today’s ruling could make things harder for former military spouses like Sandra. But he suggested that, going forward, state courts can try to account for the possibility that a veteran could later waive some part of retirement pay in favor of disability benefits, or they can recalculate spousal support based on later changes in circumstances. In this case, however, the state courts did not do that. Instead, the Supreme Court noted, the state courts’ rulings “rested entirely upon the need to restore Sandra’s lost portion.”