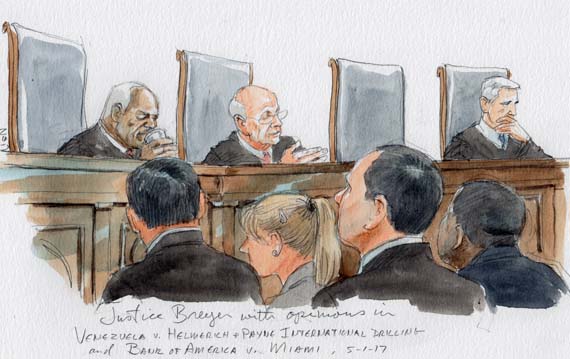 The Supreme Court handed a partial but significant victory to cities today, holding that the Fair Housing Act allows the city of Miami to bring a lawsuit alleging that two banks, Bank of America and Wells Fargo, violated the law when they issued riskier but more costly mortgages to minority customers than they had offered to white borrowers. But it was hardly a complete win for the city, as the court also ruled that the lower court should have applied a tougher test to determine whether the city can recover compensation for its losses. This means that the case will now return to the lower court for it to decide whether there is enough of a connection between the banks’ lending practices and the city’s economic injuries to hold the banks liable.

Miami filed its lawsuit in 2013, arguing that the banks had violated the FHA, a 1968 civil rights law that bars discrimination in the sale, rental and financing of housing, in several ways. First, the banks allegedly made loans to minority borrowers that – as the court today described them – included “excessively high interest rates, unjustified fees, teaser low-rate loans that overstated refinancing opportunities, large prepayment penalties, and—when default loomed—unjustified refusals to refinance or modify the loans.” This, the city contended, not only led to higher default and foreclosure rates among minority borrowers than their white counterparts, but also imposed significant burdens on the city: More foreclosures meant lower property values, which led to a drop in property tax revenues and an uptick in demand for city services like police and fire protection.

The banks asked the court to dismiss the lawsuit. First, they contended that the city does not fall within the group of individuals or entities – known as the “zone of interests” – that Congress intended to protect when it passed the FHA. By a vote of 5-3, the court today rejected this argument. Writing for a majority that also included Chief Justice John Roberts and Justices Ruth Bader Ginsburg, Sonia Sotomayor and Elena Kagan, Justice Stephen Breyer explained that the FHA allows anyone who “claims to have been injured by a discriminatory housing practice” to bring a lawsuit. The Supreme Court, Breyer emphasized, has consistently ruled that this definition should be interpreted broadly; relying on that language, he added, the court has allowed similar lawsuits – including one by a “village alleging that it lost tax revenue and had the racial balance of its community undermined by racial-steering practices” – to go forward. Moreover, he noted, in the wake of those cases, Congress made changes to the FHA but left its definition of who can sue largely intact – effectively reaffirming the justices’ expansive reading of that definition.

The banks fared better on the second question they asked the court to address: whether the harms that Miami suffered are sufficiently related to a violation of the FHA that the banks should have to pay for them. In allowing the city’s lawsuit to continue, the U.S. Court of Appeals for the 11th Circuit ruled that the city could make that showing because the effects of the banks’ allegedly discriminatory lending practices were foreseeable. But that, the court held today, was too low a bar. Explaining that the “housing market is interconnected with economic and social life,” the court reasoned that an FHA violation could “be expected to cause ripples of harm to flow far beyond the defendant’s misconduct.” “Nothing in the statute,” the court continued, “suggests that Congress intended to provide a remedy wherever those ripples travel” – particularly when “entertaining suits to recover damages for any foreseeable result of an FHA violation would risk massive and complex damages litigation.”

Instead, the court explained, plaintiffs suing under the FHA must show a direct connection between the injury and the violation. Although the court suggested that damages would not be available when the injury is more than one step removed from the conduct at issue, it declined to provide any more specifics and sent the case back to the lower court, directing it to take a stab at defining the required direct connection and then determining whether the city can meet that requirement in this case.

Justice Clarence Thomas filed an opinion dissenting in part and concurring in part, which was joined by Justices Anthony Kennedy and Samuel Alito. (The court’s newest justice, Neil Gorsuch, joined the court after the case was argued and did not participate.) In Thomas’ view, the majority was wrong to conclude that Congress intended the FHA to protect cities like Miami, because the injuries that the city cited in its lawsuit are too remote from the act’s purpose. The FHA was intended to protect victims of discrimination or – perhaps – someone whose neighborhood remains segregated as a result of that discrimination, Thomas observed. “But nothing in the text of the FHA,” he stressed, “suggests that Congress was concerned about decreased property values, foreclosures, and urban blight, much less about strains on municipal budgets that might follow.”

Thomas agreed with the majority on one point: its conclusion that, as a general matter, a plaintiff suing under the FHA must show a direct connection between the injury and the violation in order to recover damages from the alleged violator. But he disagreed with the majority’s decision to send the city’s case back to the lower court for it to make that determination. Even the majority’s opinion, he contended, “leaves little doubt that neither Miami nor any similarly situated plaintiff can satisfy the rigorous standard” established today, when even Miami’s own pleadings demonstrate “that the link between the alleged FHA violation and its asserted injuries is exceedingly attenuated.”

Today’s ruling was reminiscent of the Supreme Court’s decision nearly two years ago in another FHA case, in which the justices agreed, by a vote of 5-4, that the statute allows lawsuits based on “disparate impact” – that is, allegations that a policy or practice has a discriminatory effect even if it was not necessarily intended to discriminate – but appeared to place new restrictions on when and how those lawsuits can be brought. Like the “disparate impact” lawsuit, today’s decision seems to have all the hallmarks of a compromise: It will allow Miami’s case (and those of the other cities that have brought similar lawsuits) to go forward, but it also establishes a fairly stringent test for damages that could put the brakes on many, if not most, cities’ lawsuits.