A “view” from the courtroom: Call waiting

It’s the penultimate day of arguments in this modest term, and after issuing its opinion in Lewis v. Clarke (about tribal sovereign immunity) and conducting bar admissions, the court is just a few minutes into the oral argument in Bristol-Myers Squibb Co. v. Superior Court of California (about personal jurisdiction).

And then … a cellphone ringtone goes off. The Supreme Court police department has been especially vigilant in keeping visitors from bringing such devices into the courtroom since a couple of high-profile protests involving hidden pen cameras in recent years.

But cellphones do occasionally end up in the ornate courtroom and announce themselves. Today, the culprit is a 23-year veteran of the bench. Justice Stephen Breyer looks a bit sheepish as he maneuvers to silence his phone’s lively chime. 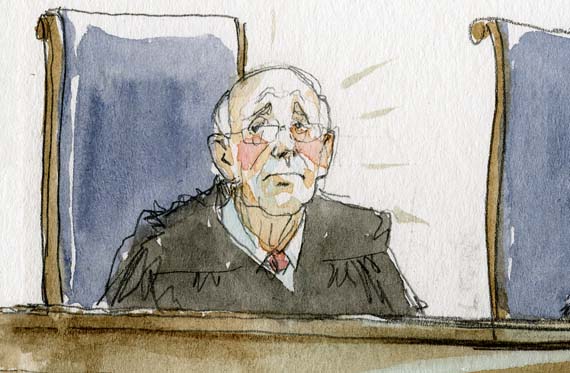 Justices Samuel Alito and Elena Kagan chuckle. Breyer looks to Chief Justice John Roberts with an apologetic expression before sharing a laugh with Justice Clarence Thomas. Some of my colleagues think they see Breyer handing the phone to one of the court aides who sit behind the justices.

Neal Katyal, the former acting U.S. solicitor general who is arguing on behalf of Bristol-Myers Squibb at that moment, appears unflustered by the interruption.

(Later in the argument, there is another short cellphone disturbance, a “pinging” sound. It’s not clear who is responsible for that one.)

I would like to be able to say that after the argument, reporters retired to the press room and began discussing the finer points of personal jurisdiction. But all we can really talk about for several minutes is Justice Breyer’s cellphone.

Supreme Court Public Information Officer Kathleen Arberg says she will check with the justice’s chambers to confirm our eyewitness recollections. But Breyer is still on the bench for the second case, she reminds us. Well, couldn’t she just call him there and ask? one smart-aleck reporter queries. (OK, it was this smart aleck.)

A little later, Arberg confirms that it was indeed Breyer whose cellphone went off. It was “an oversight” that he brought the phone into the courtroom, and it was not something he normally does, she says. But it did liven up the first of two civil procedure arguments on a rainy day.

[Disclosure: Goldstein & Russell, P.C., whose attorneys contribute to this blog in various capacities, is among the counsel to the respondents in Bristol-Myers. The author of this post, however, is not affiliated with the firm.]