Argument analysis: Justices leaning toward a ruling for Trinity Lutheran on the merits

When the Supreme Court heard oral argument this morning in Trinity Lutheran Church of Columbia v. Comer, a Missouri church’s challenge to its exclusion from a state program that provides grants to nonprofits to allow them to resurface their playgrounds with recycled tires, all eyes were on the court’s newest justice, Neil Gorsuch. After all, the conventional wisdom went, the other eight justices were likely deadlocked on the case and were expecting him to cast the tiebreaking vote, which is why they waited nearly 15 months after granting review before hearing oral argument. That may well have been true, but it was certainly not how it seemed to play out in the courtroom today. After roughly an hour of oral argument, the state seemed to have only two certain votes – those of Justices Ruth Bader Ginsburg and Sonia Sotomayor. Moreover, the justices seemed inclined to go ahead and decide the case even though Missouri had announced last week that it had changed the policy at issue in the case to allow churches to compete for the grants in the future. The end result could be an important ruling on the disbursement of funds by state and local governments to religious institutions. 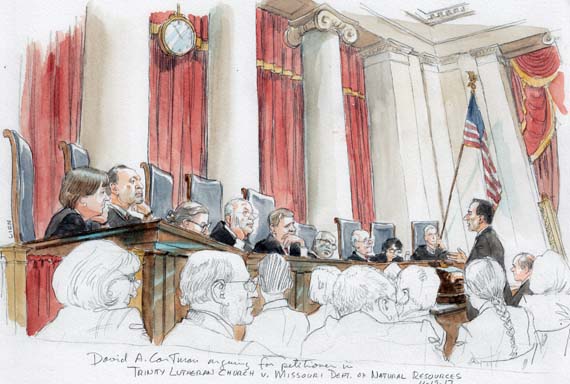 David A. Cortman at lectern for petitioner (Art Lien)

Arguing on behalf of Trinity Lutheran, David Cortman reiterated that the church’s preschool had been excluded from the state-run grant program solely because it was operated by a church. Ginsburg didn’t seem to see a problem with that proposition. She noted that in 1947, in a case called Everson v. Board of Education, the court had ruled that the Framers didn’t want tax money going to maintain churches or property. Shouldn’t that principle, she asked, govern here?

Sotomayor also observed that there has been a long history in the United States of states not wanting to fund churches; they should be free to do that in cases like this. We seem to be confusing funding, she suggested, with the practice of religion. The church isn’t going to close without a new playground surface, she stressed, so she was skeptical that this case actually implicates the right to free exercise of religion.

Justice Samuel Alito pushed back against the idea that provisions like the state constitutional amendment on which Missouri relied to deny funding to Trinity Lutheran reflect some sort of “honorable historical tradition.” Is that, he asked Cortman somewhat rhetorically, “the proper way to analyze this question?” 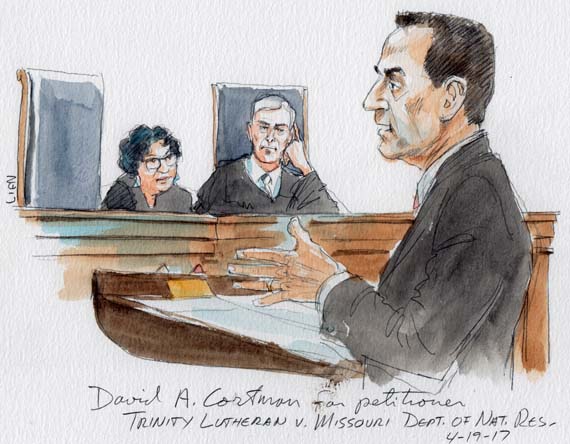 David A. Cortman for petitioner

James Layton, who is now an attorney in private practice but was the solicitor general of Missouri when the state filed its briefs in the case last year, argued on behalf of Missouri. Layton told the justices that the state had barred funding from going to religious institutions because it wanted to avoid the appearance that it was both choosing among different churches and making physical improvements to churches.

Layton’s argument did not seem to resonate with most of the justices. Citing a variety of federal programs that provide funding that could flow to religious institutions – for example, a Department of Homeland Security program to improve security near high-risk targets like synagogues or mosques and a program to repair buildings damaged by the bombing at the federal building in Oklahoma City – Alito pressed Layton on whether the state’s policy would bar similar programs. Layton held firm, telling Alito that it would because state money cannot be used for religious institutions.

That response prompted Kagan – who during Cortman’s argument had seemed to be leaning toward the state – to ask whether the state’s position would also bar the state from providing police and fire protection to churches. Layton responded that it would not, reasoning that public safety is a service, rather than something for which the state gives funding to a religious group.

Justice Stephen Breyer seemed unconvinced. He first asked Layton whether the U.S. Constitution would allow a state to declare that it wouldn’t provide a church with police or fire protection. When Layton responded that would not, Breyer then moved on to what seemed to him to be the logical next step: How does the Constitution then allow Missouri to deny money for a new playground surface to a daycare center, whose students could face all kinds of potential hazards – ranging from a skinned knee to tetanus and a broken leg – from the older, less safe playground?

Alito seized on what he clearly viewed as a potential weakness in the state’s defense of its policy. How do you distinguish, he asked Layton, between a program that is open to everyone who wants the funding and a program like the playground resurfacing program that awards grants based on purely neutral criteria?

Other justices seemed to agree. Kagan suggested to Layton that, at bottom, the playground resurfacing program is open to everyone; the state is just depriving one specific group of nonprofits – religious ones – from applying. In a statement that bodes poorly for the state, she declared that “this is a clear burden on a constitutional right” because religious individuals and groups are barred from competing for an otherwise neutral benefit.

Gorsuch followed up on this line of questioning, asking Layton to explain why excluding religious groups from selective programs would be preferable to excluding them from a general benefit. Layton responded that selective programs tend to have more public visibility than the general ones, and can effectively amount to a government endorsement of the religious group and its mission. But Gorsuch was dubious. How, he asked, do we draw those lines? 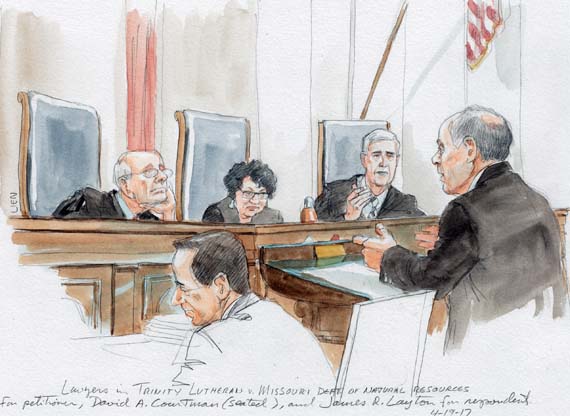 Breyer worried aloud that Layton’s reliance on the differences between selective and general benefits would create its own set of problems. If we accept your argument, he told Layton, we will see “litigation forever.” “I am afraid of that one,” he concluded.

The justices spent relatively little time exploring the question that they had asked both sides to brief in an order issued last week: What effect, if any, should the Missouri governor’s recent announcement that the state would, going forward, make grants available to religious groups have on this case? In the briefs that they filed yesterday, both the church and the state urged the justices to go ahead and decide the case anyway, and the justices today seemed to agree. Breyer raised the issue first, well into Cortman’s argument. Breyer asked Cortman why the case wouldn’t be moot. The church, Breyer noted, will receive its grant. And it didn’t ask for money to compensate for the earlier denial of the grant; instead, the church was simply seeking an order directing the state to award the grants in the future.

Cortman responded that the “political winds” could still change, especially because the new policy will almost certainly be challenged in court and could be struck down. The key question for the court is whether the state is “free to return to its old ways” – which, he suggested, it is.

The issue did not surface again until late in Layton’s argument, when Sotomayor hinted that the state’s about-face on the underlying policy indicated that the state attorney general now actually supported the church’s position. If the state is not willing to fight this case, Sotomayor suggested, had it appointed Layton (who no longer works for the state) to “manufacture” the kind of adversity that the case would need for the court to rule on it? Tellingly, Sotomayor’s statement came immediately after Kagan had signaled a willingness to vote for the church, and may reflect a last-ditch effort to try to avoid a ruling in the church’s favor by convincing her colleagues that the case is moot.

Will Sotomayor succeed in getting the case dismissed without a ruling on the merits? If today’s oral argument is any indicator, it seems unlikely. If the justices were to dismiss the case, we could know in the next few weeks. But the more likely scenario – even if the justices are not closely divided – is that the court will issue a decision on the merits sometime in late June.