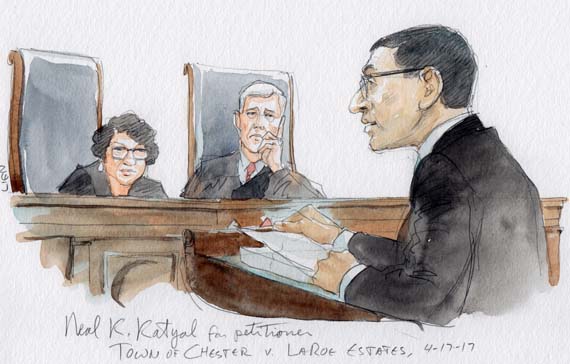 All sides faced sharp questioning from many corners of the Supreme Court on Monday in Town of Chester v. Laroe Estates on the question of whether intervenors as of right under Federal Rule of Civil Procedure 24 must have Article III standing.

Representing Chester, Neal Katyal began by arguing that an intervenor-of-right is a “full-blown party” with the “full suite of powers” of the judiciary, from issuing subpoenas to seeking summary judgment. Because “standing is not dispensed in gross” (a phrase Katyal used twice), those assertions of judicial power must be grounded in Article III. And because intervenors must show that existing parties do not represent their interests, they, by definition, are doing something different than the parties, necessitating a standing inquiry.

Justice Stephen Breyer asked Katyal why the standing inquiry, rather than occurring at the threshold, cannot wait until an intervenor seeks something different from a party; he offered a case in which the intervenor believes he has a better lawyer to make arguments that are otherwise identical. Justice Elena Kagan followed by suggesting that there should be a difference between an intervenor asserting a claim for relief and one contributing to how the court thinks about the case as framed by the parties. Katyal pointed to recent decisions attempting to limit discovery as highlighting the risks from broad discovery conducted at the behest of intervenors who lack standing; without such limitations, these “bystanders” without standing are able to trigger the “massive power” of the federal courts. Chief Justice John Roberts repeated Breyer’s question about why it made a difference whether the district court did the standing inquiry at the outset rather than when an intervenor sought something more; Katyal responded that the “what” is more important than the “when” of the standing inquiry, although he suggested the language of Rule 24 made the inquiry better at the threshold. Responding to questions from Kagan and Justice Anthony Kennedy, Katyal explained that the presence of one plaintiff with standing does not alleviate the problem. Multiple original plaintiffs march in lockstep, but an intervenor only enters the case when the original plaintiffs do not represent or protect his interests, placing the intervenor out of lockstep. Kagan found this distinction “odd.”

Assistant to the Solicitor General Sarah Harrington argued for the United States as amicus curiae in support of Chester. She maintained that the best reading of Rule 24 is that an intervenor must demonstrate constitutional standing, in addition to meeting the statutory requirement of showing that current parties cannot adequately represent the would-be intervenor’s interests. Harrington then doubled back to a question Justice Ruth Bader Ginsburg had asked Katyal (and that Breyer repeated), about potential differences this creates between intervenor-defendants and intervenor-plaintiffs and how a defendant could have standing. Harrington explained that there was no difference between intervenor-plaintiffs and intervenor-defendants, because the standing of intervenors (unlike that of original plaintiffs) is tied to the potential injury from the disposition or outcome of the lawsuit itself, not from any real-world behavior. An intervenor’s standing is analyzed much as a defendant’s standing to appeal, which is based on an injury caused by an adverse lower-court judgment. 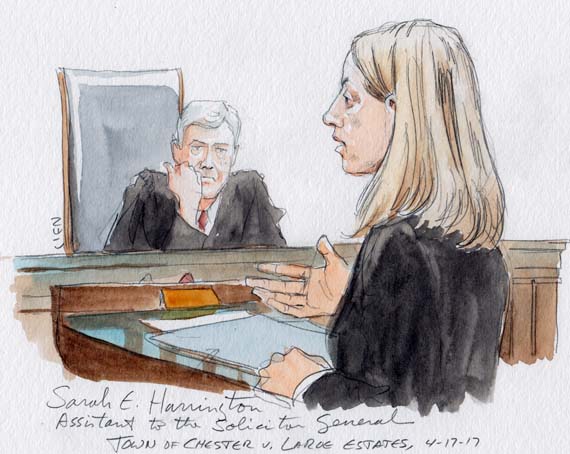 Arguing for Laroe Estates, Shay Dvoretzky questioned the “constitutionalization of every intervention motion” that offers a “solution in search of a problem.” The purpose of standing, Dvoretzky argued, is to prevent courts from interjecting themselves to issue advisory opinions about the actions of the political branches — not to “micromanage” the conduct of litigation in discovery. Once there is one plaintiff with standing, Article III is satisfied; nothing that any intervenor does changes that, unless that intervenor asserts a new or different claim for relief or seeks a different remedy in its own name.

Dvoretzky returned to this position in response to a fusillade of questions from Roberts, Breyer, Justice Samuel Alito and Justice Neil Gorsuch. In response to a question from Gorsuch, Dvoretzky explained that Laroe was not seeking a distinct remedy in this case, but was attempting only to “maximize” the recovery by the plaintiff Estate of Steven Sherman, because Laroe has an interest in that recovery. But Dvoretzky ran into a problem in making this argument – whether different relief is sought in any case depends on the scope of the judgment sought by the plaintiff or plaintiffs and any intervenors, a principle reflected in past cases in which the court affirmed judgments in favor of plaintiffs without inquiring into their standing. This answer did not satisfy Gorsuch, who said he would be “grateful” if Dvoretzky would answer what was “not a trick question” about the limits on a plaintiff seeking a judgment in the name of another and on an intervenor seeking judgment in its own name; when Dvoretzky continued to tie the answer to the scope of the judgment issued, Gorsuch said “I’ll let you go.” But Roberts jumped in to say he “may not” let Dvoretzky go; it is “circular” to say the intervenor can seek the same relief on the same claim but still exercise the authority of the court in issuing subpoenas beyond what the plaintiff seeks. 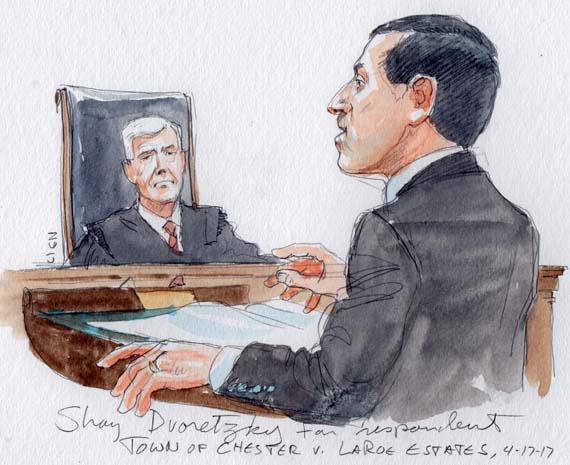 Breyer later asked Dvoretzky to identify the defect in the government’s argument about Rule 24 reflecting standing principles for injuries caused by the litigation. The problem, Dvoretzky argued, is that Rule 24 and Article III serve different purposes – Article III is about keeping federal courts out of non-live controversies, while Rule 24 is about protecting the interests of those who may be affected by an existing live dispute. Justice Sonia Sotomayor helped Dvoretzky get to the bottom of his position, framing the standing inquiry as “whether or not you’re asking for relief different from someone with a case or controversy,” with Dvoretzky putting it slightly differently – the presence of a different claim or request for relief by an intervenor dictates whether a standing inquiry must be made at all.

On rebuttal, Ginsburg and Kennedy returned to the distinction between intervenors as-of-right and permissive intervenors under Rule 24(b). Katyal had argued earlier that permissive intervenors need not have standing, because courts can place limits on their participation, rendering them less than full parties. But, Ginsburg and Kennedy asked, don’t courts exercise substantial control over mandatory intervenors who are full parties – for example, not allowing them to take duplicative or oppressive discovery? Katyal responded that control over permissive intervenors is greater than over intervenors-of-right. And, Katyal argued, this is an ongoing problem, with ideological bystanders (on both sides of the spectrum) intervening in local and county disputes and, despite lack of standing, fully engaging in litigation. This is why a threshold restriction on who can intervene, and participate as a party in all respects, is necessary.