A Colorado man who was required to register as a sex offender after being convicted of unlawful sexual contact with two teenage girls will get a shot at a new trial, a divided U.S. Supreme Court ruled today. Miguel Peña-Rodriguez had asked a state trial court for a new trial after two jurors told his lawyers that a third juror had made racially biased remarks about Peña-Rodriguez and his main witness, who are both Hispanic. But the state trial court rejected Peña-Rodriguez’s request, citing a state evidentiary rule that generally bars jurors from testifying about statements made during deliberations that might call the verdict into question. In a major ruling on juror bias and fair trials, the Supreme Court reversed that holding by a vote of 5-3 and sent Peña-Rodriguez’s case back to the lower courts for them to consider the two jurors’ testimony for the first time. 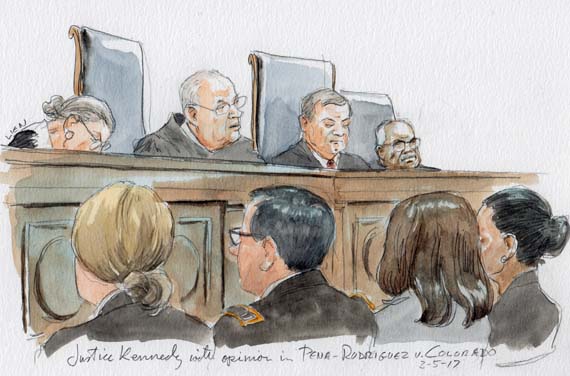 Justice Anthony Kennedy wrote for the court, in a decision joined by Justices Ruth Bader Ginsburg, Stephen Breyer, Sonia Sotomayor, and Elena Kagan. The court began by acknowledging that Colorado’s “no impeachment” rule – which mirrors similar rules in the federal system and around the country – serves important purposes: It allows “full and vigorous discussions” among jurors, who do not need to worry about later efforts to pry into those deliberations, and it “gives stability and finality to verdicts.”

But those considerations, the court determined, must yield when there is evidence that a juror has relied on racial stereotypes or prejudice to convict a defendant. Racial bias, the court explained, is different and more serious than the concerns that led the court to reject proposed exceptions to the “no impeachment” rule in its earlier cases. Although the prior cases involved behavior that was “troubling and unacceptable,” the court continued, the conduct in those cases was “anomalous,” resulting from “a single jury—or juror—gone off course.” In contrast, racial bias in jury deliberations threatens not only the proceeding in which it occurs but also the administration of justice more broadly.

Similarly, while safeguards – such as the process by which the jury is screened and questioned – built into the jury system can help to detect other kinds of bias, the court reasoned, racial bias can be harder to root out. “Generic questions” about racial bias may not go far enough to expose it, the court observed, but more specific questions could actually make the problem worse. And jurors may be more reluctant to report racially biased statements by other members of the jury than, say, statements suggesting that a juror’s personal experiences with the subject matter of the dispute affected her vote. The court concluded that a “constitutional rule that racial bias in the justice system must be addressed—including, in some instances, after the verdict has been entered—is necessary to prevent a systemic loss of confidence in jury verdicts, a confidence that is a central premise of the Sixth Amendment trial right.”

The court took pains to emphasize that defendants who allege that a juror was racially biased must meet a high bar. “Not every offhand comment indicating racial bias or hostility will justify setting aside the no-impeachment bar to allow further judicial inquiry,” the court stressed. Instead, the defendant must show “that one or more jurors made statements exhibiting overt racial bias that cast serious doubt on the fairness and impartiality of the jury’s deliberations and resulting verdict. To qualify,” the court continued, “the statement must tend to show that racial animus was a significant motivating factor in the juror’s vote to convict.”

Although the court made clear that, as a general rule, trial courts have significant discretion in deciding whether the jurors’ statements are sufficiently serious to warrant further examination, it also left little doubt that Peña-Rodriguez had satisfied the stringent standard it established today. The juror’s statements – which included saying that, in his experience, “nine times out of ten Mexican men were guilty of being aggressive toward women and young girls,” and that “Mexican men had a bravado that caused them to believe they could do whatever they wanted with women” – were, the court noted, “egregious and unmistakable in their reliance on racial bias.” The juror had not only used “a dangerous racial stereotype to conclude” that Peña-Rodriguez “was guilty and his alibi witness should not be believed, but he also encouraged other jurors to join him in convicting on that basis.” “When jurors disclose an instance of racial bias as serious as the one involved in this case,” the court concluded, “the law must not wholly disregard its occurrence.”

Justice Samuel Alito dissented from today’s ruling, in an opinion that was joined by Chief Justice John Roberts and Justice Clarence Thomas. While conceding that the court’s decision was “well-intentioned,” Alito argued that the decision will create precisely the kind of problems that the “no impeachment” rule was created to prevent. For example, he contended, jurors will not be completely open and honest in their deliberations if they fear that the content of those discussions could be publicly disclosed later. Jurors may face harassment from the losers in the case, who will seek fodder with which to obtain a new trial – a development that could in turn discourage citizens from serving on juries at all. And the finality of jury verdicts will be undermined if motions for a new trial based on juror bias can be made long after the verdict has been rendered. The majority’s decision, Alito complained, “barely bothers to engage” with these important policy issues.

Today’s ruling left open some important questions related to allegations of racial bias in the jury. The court did not decide what procedures courts should use when a defendant seeks a new trial based on testimony that one or more jurors was racially biased, nor did it weigh in on what standard courts should use in deciding whether to order a new trial in such circumstances. So it is not clear whether Miguel Peña-Rodriguez will ultimately get a new trial, or whether he will prevail if he does. But today’s ruling means that his evidence of juror bias (and evidence of juror bias offered by other defendants in a similar situation) will at least be considered.