Only sentencing guideline aficionados would have paid close attention to yesterday morning’s decision in Beckles v. United States, which came more than three months after the oral argument. In Beckles, the Supreme Court confronted another challenge to the residual clause that defines a “crime of violence” to include an offense that “involves conduct that presents a serious potential risk of physical injury to another,” this time as part of guideline Sections 4B1.1(a) and 4B1.2(a). Cutting through the thicket of void-for-vagueness doctrine and retroactivity analysis, Justice Clarence Thomas, writing for five of the seven justices who participated in the case, categorically declared the advisory sentencing guidelines immune from vagueness challenges under the due process clause. 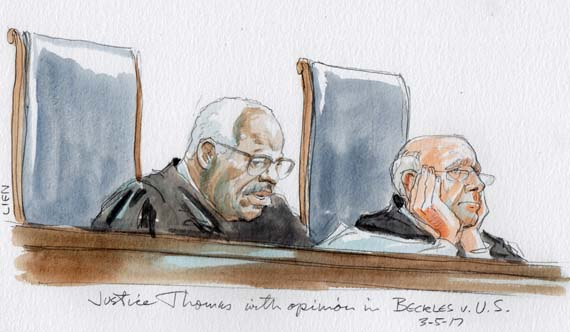 Despite a somewhat lengthy procedural history, the background in the case is straightforward. In 2007, Travis Beckles was convicted of possession of a firearm – a sawed-off shotgun – by a convicted felon under 18 U.S.C. §922(g)(1). Finding the offense to be a crime of violence under the guidelines’ residual clause, the district court applied the career offender enhancement. The guideline commentary at the time specifically listed possession of a sawed-off shotgun as a crime of violence.

In Johnson v. United States, the Court declared the identically worded residual clause in the Armed Career Criminal Act of 1984, Section 924(e)(2)(B), unconstitutionally vague. In Welch v. United States, the court made Johnson retroactively applicable on collateral review. As a consequence, multiple appellate courts voided the guidelines’ residual clause, and made their holdings retroactive. The U.S. Court of Appeals for the 11th Circuit, however, found the other circuits’ reliance on Johnson misplaced and distinguished the statute from the guideline provision. The circuit conflict triggered the Supreme Court’s agreement to review this case.

All participating justices agreed that Beckles should lose, an outcome foreseeable after oral argument. Justice Elena Kagan had recused herself, so the court heard the case with only seven members. Five of them coalesced around the broad holding set forth in Thomas’ opinion.

In ruling categorically that the advisory guidelines are not subject to vagueness challenges under the due process clause, the court rejected the arguments of both Beckles and the federal government, who had agreed that the doctrine applied to the guidelines but differed on retroactivity and on the application of the doctrine in this case. (The court had appointed a “friend of the court” to defend the 11th Circuit’s ruling.)

The core issue in this case, as in several earlier cases, was the essential nature of the guidelines. Citing to his dissent in Peugh v. United States, Thomas described the advisory guidelines as merely guiding, but not constraining, discretion within a statutory range. In contrast to sentencing statutes, such as the ACCA’s residual clause, the advisory guidelines “do not fix the permissible range of sentences. To the contrary, they merely guide the exercise of a court’s discretion in choosing an appropriate sentence within the statutory range.” Therefore, they are more akin to pre-guideline sentencing than to sentencing after the guidelines were enacted but before the court declared them to be effectively advisory in United States v. Booker. “If a system of unfettered discretion is not unconstitutionally vague,” the court reasoned, “then it is difficult to see how the present system of guided discretion could be.” The advisory guidelines, in contrast to sentencing statutes mandating a higher range like the ACCA’s residual clause, don’t “implicate the twin concerns underlying vagueness doctrine—providing notice and preventing arbitrary enforcement.”

The opinion noted that the due process clause remains applicable to sentencing procedure generally. Exempting the guidelines from vagueness challenges does not shield them from all constitutional review. Thomas referenced Peugh, in which the court subjected the guidelines to ex post facto review. In that situation, he noted, the retroactive increase of the applicable guideline range rendered a more severe sentence likely because the guidelines acted as a framework for sentencing.

The opinion also highlighted an important side effect of today’s decision: the end of potential vagueness challenges to other advisory guideline provisions, especially the Section 3553 sentencing factors. As they are all equally vague, Thomas pointed out, a different outcome would have put them, and presumably the entire guidelines’ edifice, in peril. The court’s holding that the advisory guidelines only guide discretion, however, means that these provisions are not subject to a vagueness challenge.

In contrast to Thomas’ desire to close the door on any vagueness challenges, Justice Anthony Kennedy, in a concurring opinion, sought to keep the door ajar for possible challenges to “a sentence, or a pattern of sentencing,” that is “so arbitrary that it implicates constitutional concerns.” That concept, however, appears to violate Thomas’ construct of the guidelines as failing to constrain discretion. If unfettered discretion is constitutional, how can any guideline provision ever be so vague as to be arbitrary? Kennedy’s concurrence suggests that he may not fully agree with the majority’s description of the guidelines

Justices Ruth Bader Ginsburg and Sonia Sotomayor issued separate opinions, each concurring solely in the court’s judgment. Ginsburg’s opening question in oral argument foreshadowed her desire for a limited decision in this case. She focused on specific and authoritative commentary in the guidelines that speaks directly to Beckles’ situation and, in her view, resolves the case. Because the commentary specifically declares possession of a sawed-off shotgun a crime of violence, the residual clause is not vague as applied to Beckles. And because Beckles doesn’t have standing to complain of vagueness as applied to others, the case ends there, in Ginsburg’s view.

Sotomayor’s opinion adopted Ginsburg’s reading of the case and faulted the majority’s decision for its overreach. Sotomayor rebuked the majority for its “unnecessary [and] deeply unsound” holding. While endorsing the majority’s description of the values underpinning the vagueness doctrine, she painted a very different picture of the guidelines. She cited liberally to the majority opinions in Peugh and Molina-Martinez v. United States in sketching her vision. In Sotomayor’s view, guidelines operate like statutes that fix sentences, making both kinds of provisions subject to the due process clause. With the guidelines as the “lodestar” of federal sentencing, the guideline range ultimately determines the sentence in the vast majority of cases. Rather than citing general sentencing statistics, Sotomayor relied on the re-sentencings that occurred in the lower courts after numerous circuits found the guidelines’ residual clause retroactively unconstitutional. Because both sentencing statutes and guideline provisions extend a defendant’s time in prison, she argued, due process protections should apply to both: A guideline will be vague if it denies a defendant sufficient notice and poses a danger of being arbitrarily enforced.

Rather than cutting through the Gordian knot, the majority leaves existing sentencing jurisprudence in doubt and upends circuit court decisions, according to Sotomayor. She also criticized the majority for insufficiently explaining the distinction between the holding in Peugh, in which the court applied the ex post facto clause to the guidelines, and the outcome here. Finally, she rejected the potential vagueness infirmity of other guideline provisions as inapposite because the residual clause, as explained in Johnson, differs qualitatively from other laws and guideline provisions. Moreover, she pointed out, the U.S. Court of Appeals for the 9th Circuit for years permitted vagueness challenges to the guidelines, without ever upholding any.

Sotomayor’s concurrence underscores the disagreement on the court as to the nature of the guidelines. What does an advisory guideline system mean, and what rules should govern it? The majority likens it to the unfettered discretionary system of days of old that allowed only for bare-bones constitutional review. Viewed through that lens, advisory guidelines are akin to the traditional sentencing regime of unguided discretion and don’t fall within the scope of vagueness review. If an all-discretionary system cannot be challenged as vague, a point on which all parties agree, then a system that guides discretion is equally exempt. Sotomayor, however, sees the advisory guidelines very differently, as the “lodestar” of federal sentencing, regulating and restricting sentencing choices. For those reasons, they are closer to sentencing statutes. As Peugh and Molina-Martinez indicate, this debate is not entirely new; the array of precedents, studded with dissenting and concurring opinions, will make it yet easier going forward to cite interchangeably to different notions about the nature of the guidelines. The dispute is likely to continue and to sharpen, making sentencing decisions yet harder to predict. It is also worth noting that the government has not been entirely consistent in its portrayal of the guidelines, which adds to the prevailing uncertainty.

As much as the court may wish to have ended all vagueness challenges here, Sotomayor reminded us in a footnote that there are already cases pending under the residual clause pre-Booker when the guidelines were still mandatory. Based on yesterday’s decision, retroactivity should be the decisive issue there, as long as the commentary did not squarely cover the petitioners’ offenses. Other sentencing issues may be buried in the cases held to await the court’s decision in Beckles.