Ginsburg shares stage with performers as opera meets the law

When Justice Ruth Bader Ginsburg walked on stage yesterday at the Kennedy Center’s Opera House, the capacity crowd rose to greet her with a standing ovation.

According to Francesca Zambello, the artistic director of the Washington National Opera, such an honor from an audience is usually reserved for the stage returns of the most beloved singers – like soprano Beverly Sills, whom Time magazine once called “America’s Queen of Opera.” 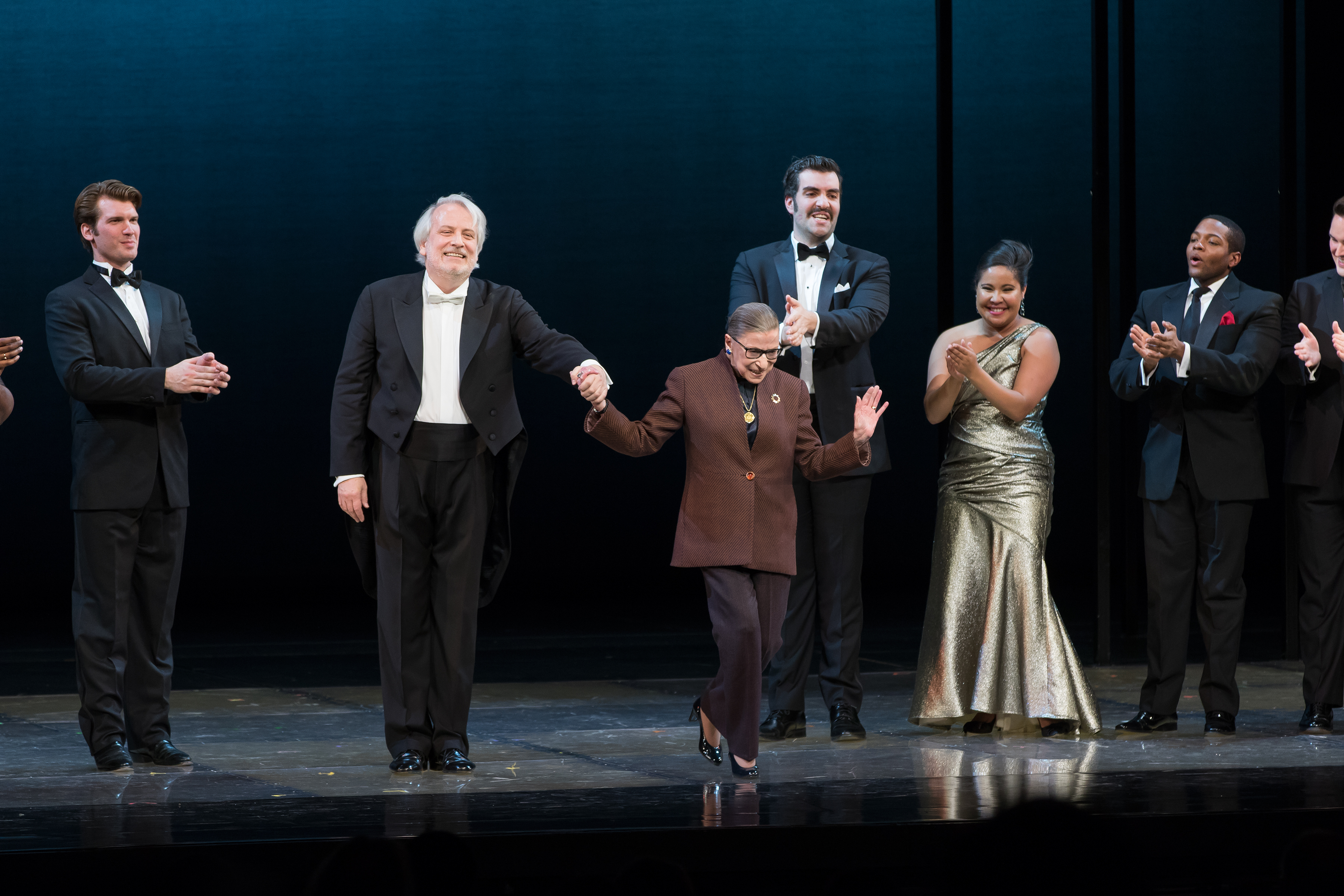 In 2017, Ginsburg could lay claim to that title. Zambello says the justice is “probably the most famous person in America right now who is outspoken and positive about opera.” And in recent years, the woman Zambello calls a “great advocate of the art form” has become much more than a passionate fan. This past fall, Ginsburg performed in a speaking role as the Duchess of Krakenthorp at the opening night of the WNO’s production of Gaetano Donizetti’s “La fille du régiment.” Her friendship and legal sparring with the late Justice Antonin Scalia, also an opera fan, even inspired Derrick Wang to write a one-act comedic opera, “Scalia/Ginsburg,” which premiered in 2015.

Last night, Ginsburg shared the stage with members of the Domingo-Cafritz Young Artist Program and the Washington National Opera Orchestra. For each of the ten pieces in the program, the justice gave a brief introduction to the opera and connected the scene to issues that have arisen under U.S. law.

Although a first in Washington, a similar event has been held for the past five years at the Glimmerglass Festival, an annual opera festival in Cooperstown, New York. The organizers booked the inaugural event in 2012, “Trials in Opera,” in a small theater, but it quickly reached capacity. Since then, Ginsburg has held the stage in the festival’s main theater, which seats 914. She still sells out every year, and Brittany Lesavoy, the festival’s director of public relations, credits the justice with attracting quite a few first-time opera-goers to Glimmerglass.

Leonore disguises herself as a man to rescue her husband from prison. Contrasting Leonore (and Minnie from Giacomo Puccini’s “The Girl of the West”) with what Ginsburg called the typical depictions of women in operas, hapless victims or evil temptresses, Ginsburg observed that these resourceful and courageous heroines “portray the way women really are.”

Alice and Meg discover that Falstaff has written them identical love letters in an attempt to access their husbands’ money. Referring to several other instances of fraudulent or deceptive letters in operas, Ginsburg explained that the U.S. mail fraud statute was enacted to prevent just these types of situations – “rapscallions scheming to fleece innocent country folk.”

The assassin Sparafucile offers his services to Rigoletto. Ginsburg referenced a 1993 triple murder-for-hire in which the assassin followed instructions from the book “Hit Man: A Technical Manual for Independent Contractors.” The victims’ family sued the book publisher for aiding and abetting the murders. A district court protected the publisher under the First Amendment, but the court of appeals reversed and ruled that the publisher could be held liable.

Amelia’s husband, Renato, plans to murder the governor of Boston, Riccardo, whom Amelia loves, at a masked ball. Ginsburg explained that the historical event inspiring this opera involved the murder of King Gustav III of Sweden, who was assassinated at a masquerade in 1792. Relating the opera to the First Amendment, Ginsburg noted that censorship standards in Verdi’s time did not allow a depiction of regicide—or of Gustav’s preference for male lovers—on stage, so Verdi had to make adjustments to the setting and plot.

After refusing to betray his friend, Cavaradossi is sentenced to death by firing squad for treason. Ginsburg noted that certain inmates on death row have begun requesting execution by firing squad, but all those requests have been denied. Ginsburg also reported that the administration of the death penalty in the United States is now limited to a handful of counties in five states and that the number of executions has declined from 98 in 1999 to 20 in 2016.

José frees Carmen after she sings a song suggesting she will spend a night of dancing and passion with him. Ginsburg noted that 97.8 percent of federal district court convictions now occur through plea bargains (though perhaps arrived at less melodiously). 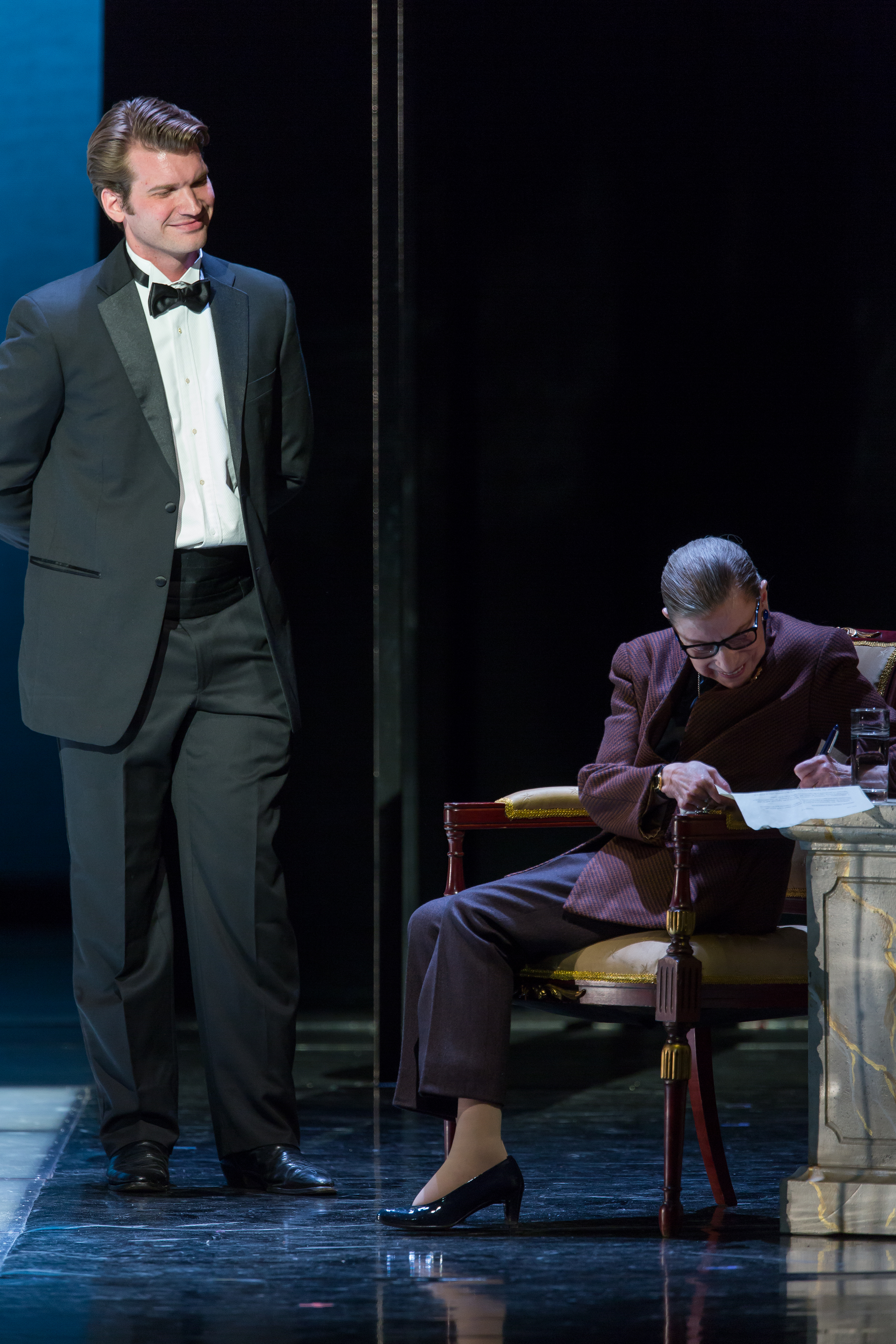 Ginsburg signs as witness to the contract between Belcore (left) and Nemorino.

In what Ginsburg called an example of the reason for contracts law, Nemorino signs a contract with Belcore (secretly his rival) to join the regiment in return for money to buy a love potion to win Adina’s affection.

Morris Chester reports the massacre of one hundred black militiamen by the Ku Klux Klan. Ginsburg borrowed from her dissent in Shelby County v. Holder; “‘the arc of the moral universe is long, but it bends toward justice’” if there is “‘a steadfast national commitment to see the task through to completion.’”

Pharoah’s daughter, Amneris, tricks Aida, a slave, into revealing her love for Radamès by claiming that Radamès has died. Ginsburg joked that nowadays, Aida could have sued for “intentional infliction of emotional distress.”

Attempting to resolve a marriage dispute, the judge offers to marry the jilted bride himself. The singers looked to Ginsburg as they sang lines meant to refer to Angelina, the bride — “and she is a judge, and a good judge too.” Ginsburg noted that in last night’s performance, the jury consisted mainly of women, “who now enjoy almost equal citizenship status.” 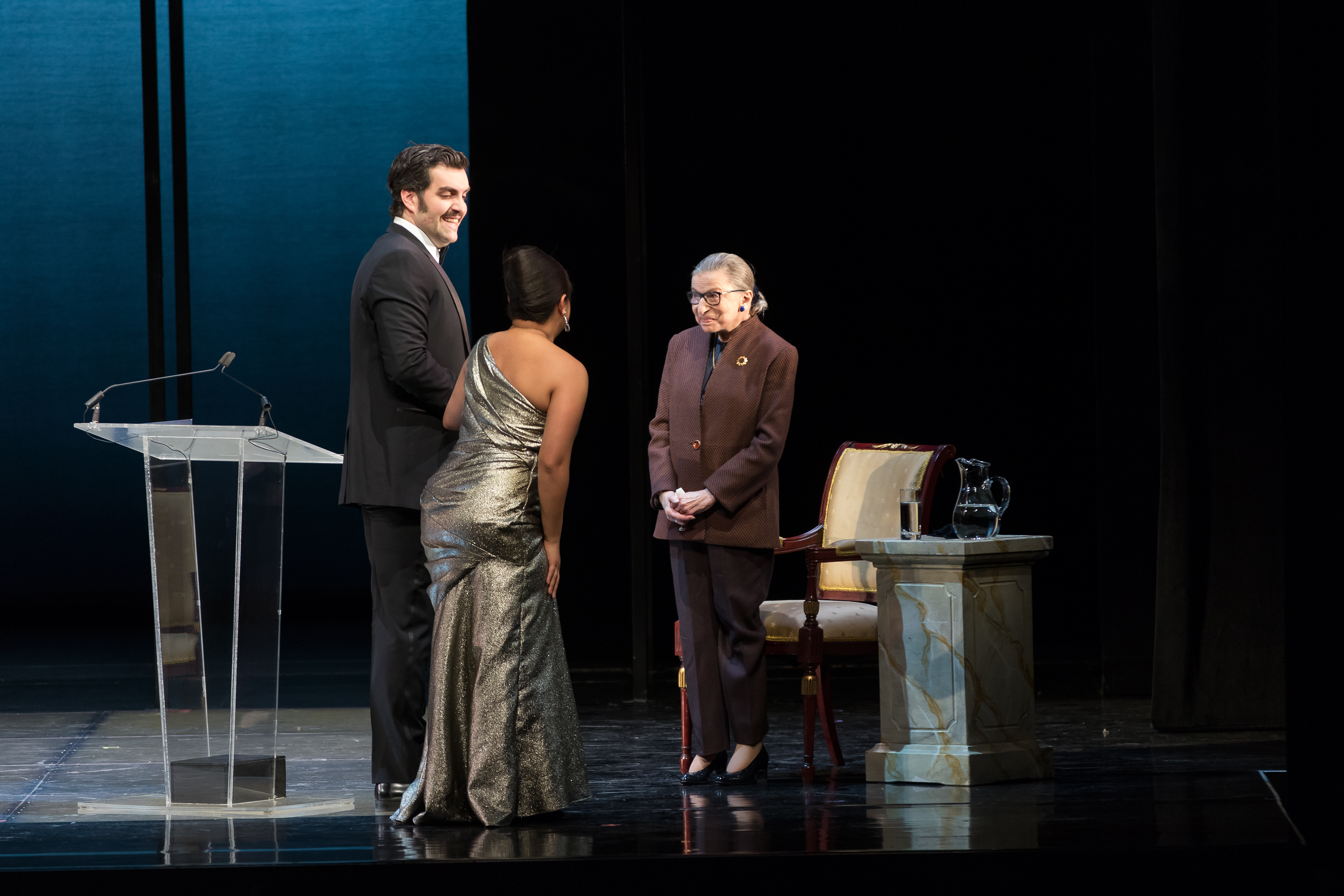 Ginsburg officiates over the impromptu wedding of the judge and Angelina.