This morning the Supreme Court heard oral argument in the case of Jae Lee, a Korean immigrant who was charged with possession of ecstasy with intent to distribute it. Lee accepted a plea bargain after his attorney told him that he would not be deported. That advice turned out to be, as Justice Elena Kagan put it today, “supremely deficient”: In addition to the year and a day in prison to which he was sentenced, Lee’s conviction also carried with it the penalty of mandatory deportation. Lee asked a federal court to vacate his conviction, but the U.S. Court of Appeals for the 6th Circuit declined to do so. It reasoned that the evidence against Lee was so overwhelming that, even if he had received bad advice from his attorney that prompted him to plead guilty, Lee could not have suffered the kind of harm from that bad advice that would render his conviction unconstitutional. The justices today seemed more sympathetic to Lee than did the 6th Circuit, although it is not clear whether he can get the five votes needed to reverse the lower court’s ruling. 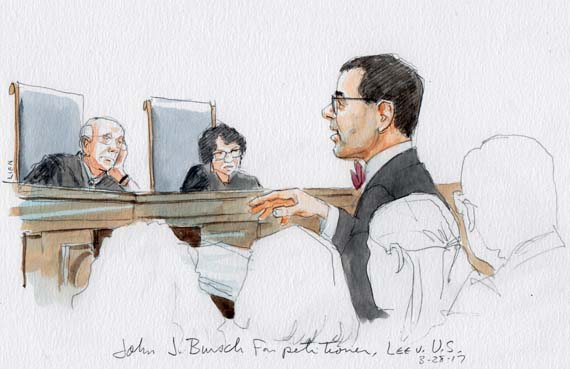 Arguing on Lee’s behalf, attorney John Bursch told the justices that everyone involved in the case believed that Lee would be allowed to remain in the country if he pleaded guilty. If Lee had known that he would be deported if he pleaded guilty, Bursch continued, he would have rejected the plea deal and either tried for a better deal or, in the worst-case scenario, gone to trial.

But Justice Anthony Kennedy was dubious, telling Bursch that he wasn’t sure that the district judge in Lee’s case could have done much more to ensure that Lee was aware of the consequences of his plea for his immigration status. Kennedy pointed to the transcript of Lee’s plea-bargain hearing, in which the district judge told Lee, before he pleaded guilty, that – because he was not a U.S. citizen – a conviction “could result in your being deported.” That in turn suggests, Kennedy said, that the court should adopt a middle ground, requiring defendants like Lee to show “a reasonable probability of success” if they had gone to trial instead of pleading guilty.

Chief Justice John Roberts seemed to share Kennedy’s skepticism. Roberts told Bursch that he didn’t understand how Lee’s case could be distinguished from any case in the future. If the court were to adopt Lee’s rule, Roberts indicated, any inmate who pleaded guilty would be able to claim that if he had received better advice, he would have gone to trial no matter how bad his odds.

Justice Samuel Alito also expressed concerns – specifically, that the rule Lee was urging the court to adopt was “not a manageable standard.” Whether a rational defendant would have gone to trial would depend on how much he valued the ability to stay in the United States, as compared with spending time in prison. “I don’t know how to do that,” Alito said. And while Alito acknowledged that the facts of Lee’s case were “very sympathetic, ” he contended that other cases might present a closer call. What about cases in which the defendant faced a much longer sentence if convicted after a trial? Alito asked. Or what if the defendant had more ties to the country to which he would be removed? How do you make that decision? he queried.

Kennedy echoed these thoughts, telling Bursch that judges know how to determine what might have happened if a case had gone to trial. But Lee is asking the court to “assess the mindset” of a defendant when he enters a plea bargain. “That’s very different,” Kennedy concluded.

Justice Elena Kagan saw the case another way. Usually, in cases alleging that a criminal defendant received constitutionally inadequate help from his attorney, she observed, courts look at what would have happened at the trial. But in cases like Lee’s, she emphasized, the focus is different: The question is the outcome of the plea proceeding, which is not the same as the outcome at trial. And when faced with the choice between a plea bargain that would result in guaranteed deportation and taking one’s chances at trial, people might “rationally decide to roll the dice.”

Roberts (who is, to be sure, the justice most likely to play devil’s advocate at oral argument) would also weigh in on this point, telling assistant to the U.S. solicitor general Eric Feigin (who argued on behalf of the federal government) that there are circumstances in which it might be rational for a defendant to choose a longer prison sentence – for example, if he needed good medical care, which he could receive in prison but would not receive if deported to another country, or if he wanted to remain close to his family. 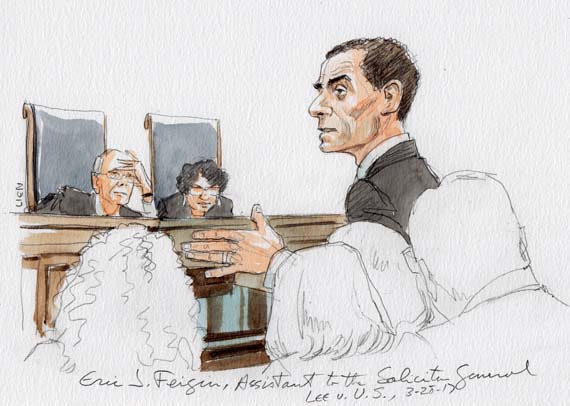 When Alito once again expressed doubts about how a trial court should decide what is rational, Justice Sonia Sotomayor countered that “there’s always a set of degrees.” Trial courts will always have to make choices, and they will draw the line somewhere. Kagan seconded this idea, telling Feigin that even if Lee’s approach “has its difficulties,” those are precisely the kinds of decisions that courts are supposed to make – and many of the lower courts have in fact been doing so for a long time.

Later on in the argument, Sotomayor again chimed in, suggesting that the standard Lee was proposing was indeed very manageable. She observed that there are “not a whole lot” of cases involving ineffective assistance of counsel at the plea-bargain stage. And of the relatively few cases that are filed, most are denied, even under the less stringent standard applied by other lower courts.

Coming away from the argument, Lee seemed to have the solid support of both Kagan and Sotomayor, and likely the support of Justices Ruth Bader Ginsburg and Stephen Breyer as well. But Lee lost in the lower court, so he would need at least five votes to prevail. As is so often the case, Kennedy seems like Lee’s best hope. And although most of Kennedy’s questions seemed more sympathetic to the government, he did ask Feigin, toward the end of the argument, whether the federal government could still try to deport Lee even if his conviction were vacated. Feigin responded that Lee could not be deported in that case, because his conviction on the charge of possession of ecstasy with the intent to distribute it was the basis for the deportation order. It’s hard to know exactly what Kennedy’s question meant, but one possibility is that Kennedy was seeking reassurance that a ruling in Lee’s favor would not be for naught. If so, that’s a good sign for Lee.