Monday’s argument in Advocate Health Care Network v. Stapleton took the justices back to their roots, with a straightforward textual question about the breadth of coverage under the Employee Retirement Income Security Act. ERISA imposes a variety of requirements on the plans to which it applies. Churches seeking to avoid that regulatory burden were able to obtain an exemption from ERISA for their pension plans. Organizations affiliated with churches operate a large share of the hospitals in this country. For more than 30 years, the three federal agencies that administer ERISA have treated the pension plans of those hospitals as exempt from ERISA. In each of the three cases consolidated for this oral argument, employees of health-care providers filed suit alleging that the pension plans provided by their employers do not qualify for the church-plan exemption. Specifically, the question is whether ERISA’s rules apply to pension plans operated by affiliates of churches, such as hospitals, if the church itself did not create the pension plan. 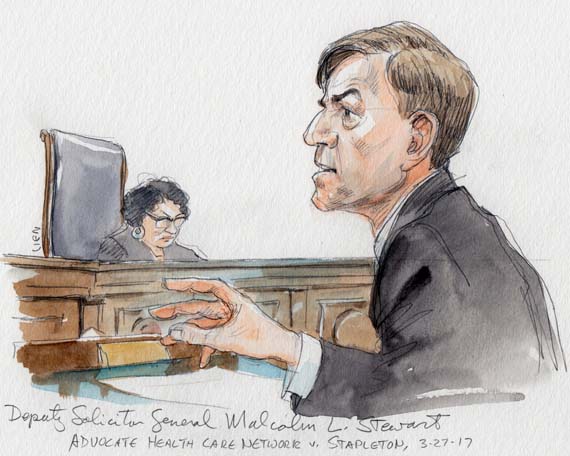 By the end of the argument, several of the justices seemed to coalesce around a likely outcome, reflecting an unwillingness to extend ERISA to cover plans that have been treated as exempt by the Internal Revenue Service and other federal agencies for 30 years. As a textual matter, each party’s position has an obvious weakness, and the justices explored those weaknesses when questioning the advocates. 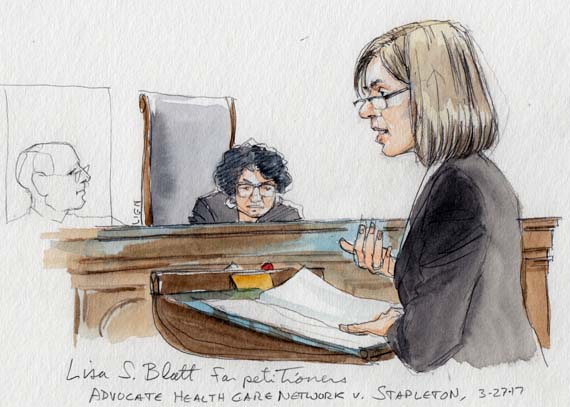 For Lisa Blatt, representing the health-care providers, the obvious problem is that the revision her clients need in order to qualify for the church-plan exemption could have been crafted much more directly. Justice Elena Kagan went to that point early on:

There would be a simple way of accomplishing what you think this provision accomplishes. You know, something along the lines of just saying any plan maintained by a church-affiliated organization is a church plan or something like that. It’s … very odd language, this statutory language, and I’m wondering why you think that Congress chose to do what you think it chose to do in this perplexing way rather than in a straightforward way. 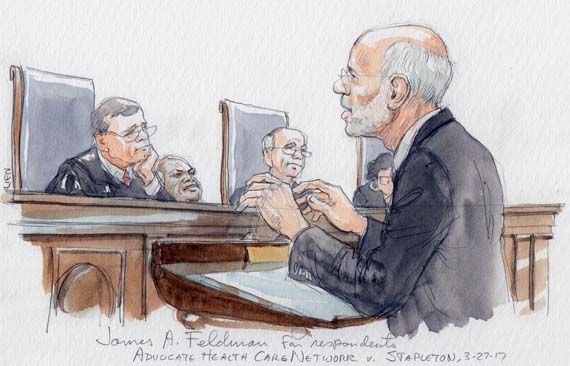 The justices also took issue with Feldman’s reading because it did not seem to exempt several categories of organizations that had been pushing most vociferously for an amendment at the time Congress stepped in to amend the statute. Sotomayor, for example, raised the problem directly:

Let’s go to … 1982. Tell me how your reading of the statute includes the organizations that were clamoring and … whom the IRS has said were covered by this provision: The pension boards that were separate from the church, and … the nuns, who were also seeking coverage. How does your reading take care of those two situations facing Congress?

Hearing Feldman’s response, Kagan interjected that she found his reading difficult because “you would be taking out some of these church pension boards that I thought were the sort of quintessential group that this was designed to include.”

The justices were also troubled by the adverse financial consequences of a ruling against the health-care providers. During her argument, Blatt asserted that the employees’ complaints sought penalties from her clients of $66 billion. Although the point did not seem to impress the justices at the time, it became a major focus of Feldman’s presentation when he suggested that the justices should not be overly concerned about reliance interests because the “cases are about primarily overwhelmingly forward-looking remedies.” That comment struck a nerve with Justice Samuel Alito, who interrupted to ask whether Blatt had been correct “when she said that the complaints seek billions of dollars in penalties?” Feldman started to respond that it was too early to be sure what the total amount of any penalties might be, but Alito would not let go: “What is the answer to my question?” When Feldman replied that he didn’t think the complaints named “a dollar figure for the penalty,” Alito asked: “Well, … if you figured out the penalties, would they be billions of dollars?” After Feldman demurred again, Alito switched to another tack: “[Y]ou said … don’t worry about the penalties; this is primarily about forward-looking things. And yet the complaints asked for the penalties. Are you willing on behalf of your clients to disavow any requests for penalties?” When Feldman predictably declined to waive any claim for penalties, Alito concluded: “Then how can you say it’s primarily about forward-looking things?”

In a similar vein, several of the justices seemed to find it inequitable to bring the affiliated-organization plans under ERISA given the widespread dissemination of the IRS’s view that the plans were exempt. Kennedy, for example, noted that the agency’s interpretation “led to hundreds of letters from the IRS. Is … that an exaggeration or … aren’t there hundreds of IRS letters approving [these plans]? … [I]t shows that an entity that had one of these plans … where there was some doubt was proceeding in good faith with the … assurance of the IRS that what they were doing was lawful.”

In the end, then, it seems quite likely that the affiliated organizations will retain their exemptions. The justices might not like the way the amendment is written, but they do not seem likely to reject the IRS’s reading of it.