Sparks were not flying yesterday in the argument in Coventry Health Care v. Nevils. This is a case in which the justices seem to have come to the bench strongly predisposed to reverse the Missouri Supreme Court; nothing in the argument jumps out as having shifted that inclination. 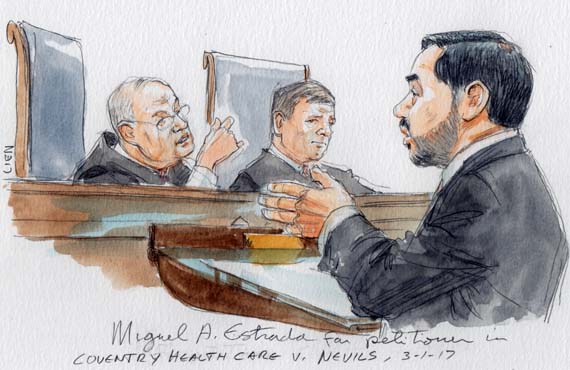 The case involves medical benefits for federal employees, paid under an insurance policy provided pursuant to the Federal Employees Health Benefits Act. Under that statute, the federal Office of Personnel Management sets the terms of the policies. Among other things, those policies include so-called “subrogation” clauses, which authorize the insurers to recover funds their insureds obtain from third parties, usually through successful tort litigation. The basic premise of those clauses is that if the insurance company already has paid for the employee’s losses, the insurance company should have the benefit of the tort recoveries.

It happens that Missouri, like many other states, has a consumer-protection statute that invalidates subrogation clauses in insurance contracts. The question in this case is whether that state statute can apply to invalidate the terms of the OPM-specified insurance policies issued to federal employees. It is no surprise that this kind of conflict would arise; the federal statute directly addresses the possibility of such a conflict, stating that the “terms of any [such policy] which relate to the nature, provision, or extent of coverage of benefits (including payments with respect to benefits) shall supersede and preempt any State or local law.” Notwithstanding that broad language (and an OPM regulation interpreting it to pre-empt the state law), the Missouri Supreme Court held that the subrogation clauses are ineffective as to federal employees in Missouri.

The argument suggested a broad and abiding skepticism about the employee’s argument. For one thing, several of the justices thought the language of the statute so clearly applied to this dispute that they could hardly understand the contrary argument pressed by Matthew Wessler, representing the employee, Jodie Nevils. For example, Justice Samuel Alito asked with apparent incredulity whether Wessler would defend the view that the Missouri statute “doesn’t affect the benefits that the participant receives.” Alito asked, “If … there’s no subrogation claim, the [participant] receives a certain amount. If there is a … requirement of subrogation, the participant receives that amount minus X?” When Wessler tried to say that the subrogated funds were not insurance benefits because they came from tort litigation, Justice Elena Kagan cut him off to insist that “money is money, and … one dollar is as good as the next. … I’ll just say it my way… [S]ay you’re in a car accident. One way you get all the hospital and medical costs that you incur, and the other way you get those costs minus any recovery in a tort suit.” It would extend this post to no purpose to quote similar comments by Justices Stephen Breyer and Sonia Sotomayor.

The only flash of excitement came when Wessler’s repeated efforts to turn to Congress’ intentions in adopting the statute struck a nerve with Alito. So, after Wessler commented that “we know that [Congress’] goal was not to create an expansive form of preemption,” Alito asked, “How do we know that?” When Wessler referred to the legislative history, Alito provoked laughter by interjecting, “You know, our colleague Justice Scalia is not here any longer, but he would be having a fit at this point.”

For another thing, little in the argument suggested any interest on the part of the justices in accepting Wessler’s argument that the statute was unconstitutional because it allowed a private contract (rather than a federal statute) to pre-empt state law. Alito in particular seemed to think that Wessler was making a big deal out of some innocuous aspects of the statutory language. At one point, Alito asked, “[W]ould you make the same argument if it said this statute hereby supersedes and preempts any State or local law that conflicts with the terms of the contract?” When Wessler stated that he’d have no problem with a statute in that form, Alito seemed to think that Wessler had given the point away entirely: “Well, boy, if you’re willing to concede that, I don’t see what there is to your argument because that’s, in essence, what this [statute] is … saying.” Alito, at least, seemed to have no appetite for drawing a line between statutes that make the contract pre-empt conflicting state law and statutes that pre-empt state law that conflicts with the contract. As he put it, “If you say the contract preempts anything that conflicts with State law, that’s … a problem. But if [the] statute … preempts anything that conflicts with the contract, that’s … not a problem?”

To be sure, at one point Chief Justice John Roberts did suggest that “sometimes semantics matter” and that “[i]f you wanted to take care of that problem, you just have to pass a law saying that the … State laws are preempted.” He seemed, though, more to be musing about the triviality of the problem than to be mounting a serious attack on the statute.

Perhaps the most telling feature of the argument was the lack of pointed questioning during Miguel Estrada’s argument on behalf of the insurer, Coventry Health Care. The bulk of Estrada’s argument was consumed by comments exploring the boundaries of a potential ruling in his favor. For example, Justice Anthony Kennedy, after commenting that “you have an express-preemption provision [and] a Federal entity that makes the contract[, which] may be all you need … in order to prevail,” asked if “some limiting principles … should just be in the back of our mind when we think about preemption.” And again, after suggesting apologetically that “it’s not really your obligation to … address a parade of horribles that isn’t in this case,” Kennedy asked if Estrada could offer any “general limiting principles [for] determining whether or not preemption … is permitted.”

Similarly, Roberts seemed interested in exploring the possible limits of a rule permitting contracts to pre-empt state law, as he raised far-ranging hypotheticals about statutes that held state law pre-empted either by American Bar Association rules of professional responsibility or by private shipping contracts.

Given the delicacy of pre-emption doctrine in general, I would not expect this to be one of the first cases to come down from the February calendar. But I would be surprised if the justices fail to coalesce with near unanimity around some straightforward basis for reversing the Missouri court’s judgment.