A “view” from the courtroom: VIP guests

There were some special guests in the courtroom on Wednesday. Ivanka Trump, the daughter of President Donald Trump, was in attendance in the VIP section with one of her daughters and an adult friend or care-giver.

Trump was present for the oral argument in Kindred Nursing Centers L.P. v. Clark, a somewhat dry case about arbitration agreements between nursing homes and patients. Before the argument, however, Trump and her daughter got to hear the justices announce opinions in three cases, about service dogs for students with disabilities, patents for multicomponent inventions, and race considerations and the death penalty. 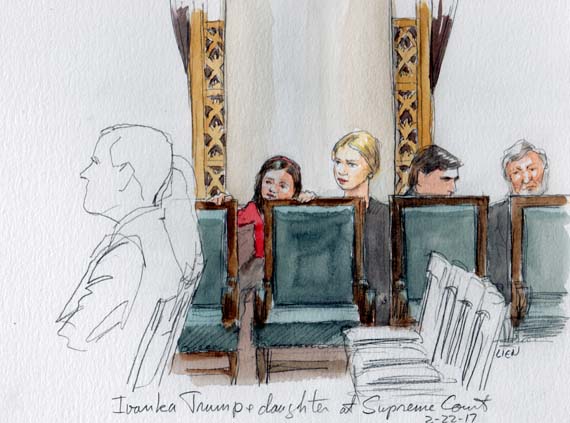 Trump chatted with some court employees before the session started and pointed out to her daughter the elaborate friezes depicting “law-givers” at top of the courtroom walls. Courtroom rules were relaxed slightly to the extent of allowing Trump’s daughter to suck on a lollipop even as the justices took the bench.

The court’s Public Information Office explained that Trump was a guest of Justice Anthony Kennedy, whom she met at the Inauguration Day luncheon at the U.S. Capitol after her father was sworn in.

It’s not uncommon for the court to welcome VIP guests from the executive branch or the family of the president. Several of President Barack Obama’s cabinet secretaries attended high-profile arguments on cases involving the Affordable Care Act and Obama’s immigration policies.

In 2015, presidential daughter Malia Obama attended a session of the court with some of her high school classmates.

Although they sat in the regular public gallery, Obama and her classmates did seem to be the beneficiaries of some level of VIP treatment, as they proceeded to one of the court’s conference rooms, perhaps to meet one or more justices after the day’s two arguments.

The Supreme Court likes to think of itself as above the fray of politics, and when it comes to welcoming daughters of the sitting president, it has indeed been non-partisan.