Argument analysis: A search for a rule, but is there even a remedy?

At today’s oral argument in Hernández v. Mesa, the latest chapter in a Mexican family’s effort to hold a U.S. Border Patrol agent liable for the fatal shooting, on Mexican soil, of their 15-year-old son, some of the justices appeared “sympathetic,” as Justice Stephen Breyer put it, to the family’s plight. But at the same time, even the justices who might be predisposed to support the family struggled to articulate a rule that would allow the family’s lawsuit to go forward without also permitting a wide variety of other – perhaps less sympathetic – cases, and they seemed frustrated by the family’s inability to identify such a rule. In the end, though, it’s not clear that the rule will matter, if the justices don’t agree that the Border Patrol agent can be sued in federal court at all. 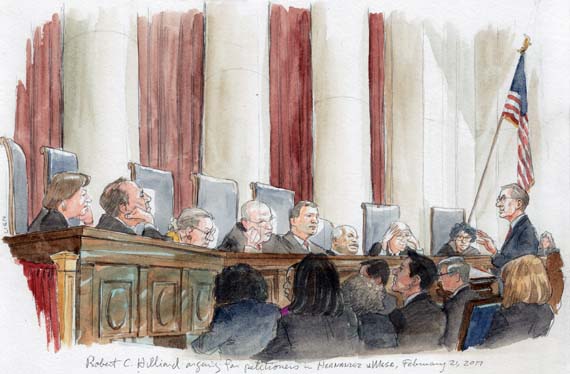 Before the oral argument began, Acting Solicitor General Noel Francisco presented the new U.S. attorney general, Jefferson B. Sessions, to the court. On behalf of the justices, Chief Justice John Roberts wished Sessions “well in the discharge of the duties of your new office.” Sessions acknowledged the good wishes, but did not stay for the oral argument.

Representing the parents of Sergio Hernández, who contend that their son was playing in the culvert along the U.S.-Mexico border when he was shot, on the Mexican side of the border, by Jesus Mesa, a Border Patrol agent who was on the U.S. side, attorney Robert Hilliard argued that the dispute now before the court was “one of the simplest” cases involving the application of U.S. law outside the United States. Mesa, a civilian law enforcement officer, fired the bullet in the United States, striking Hernández, also a civilian, and depriving Hernández of his fundamental right to life. For that reason, Hilliard argued, the Fourth Amendment’s bar on the unjustified use of deadly force applied to Hernández, even if he was outside the United States when the shooting occurred.

But Chief Justice John Roberts was skeptical. He suggested that, although Hilliard’s proposed rule would “fit the exact facts” of the family’s case, it could not actually be defined so narrowly. What about a drone strike launched across the border from Nevada, for example? 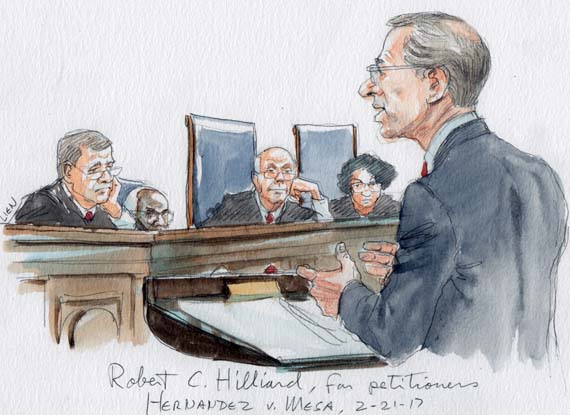 Justice Stephen Breyer, whose vote the family would likely need to prevail, also repeatedly pressed Hilliard to define the family’s suggested rule more precisely. What are the words, he asked pointedly, that allow the family to win but avoid confusion and uncertainty in other cases – so that the court’s opinion in this case does not give life to lawsuits arising out of drone strikes?

Justice Samuel Alito echoed these concerns. Would it matter, he queried, if Hernández had been 19 instead of 15, if he had been armed but had his hands up, or had been 200 yards away in Mexico rather than in the culvert? “I don’t know what rule you want us to adopt,” Alito concluded, “other than you win.”

Justice Elena Kagan saw it slightly differently, but appeared similarly troubled. In her view, Hilliard had a rule: Border Patrol agents who shoot from the United States in the border area can be held liable. The harder and more salient question, she suggested, was the rationale for that rule. What makes the confluence of those factors different from other cases, she asked?

Justices Ruth Bader Ginsburg and Sonia Sotomayor were more supportive of the family. Ginsburg observed that, as a general matter, when an act outside one jurisdiction causes an injury inside another jurisdiction, the rules governing the ensuing lawsuit can come from either jurisdiction. Discussing this case specifically, she described the dispute as having the “United States written all over it.” And when attorney Randolph Ortega, representing Mesa, emphasized that the United States could prosecute Mesa in the United States for violating his orders, Sotomayor retorted that such a prosecution wouldn’t provide any compensation to Hernández’s family for the emotional distress that they had suffered. 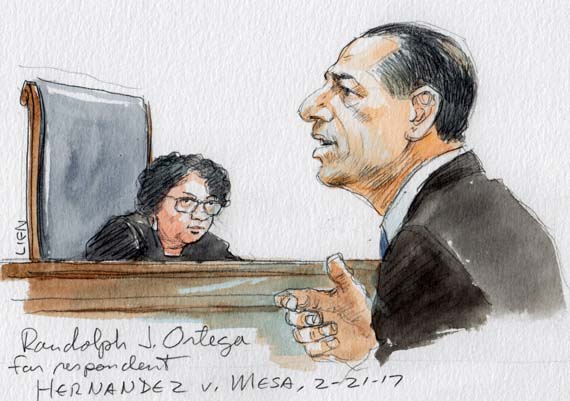 Despite the earlier concerns voiced by Breyer and Kagan about the family’s inability to identify a clear and rational rule, the two justices seemed equally (if not more) reluctant to rule that the Fourth Amendment did not protect Hernández, at least in this scenario. Breyer repeatedly stressed that the culvert on the U.S.-Mexico border where Hernández was shot is maintained jointly by the two countries, which also have a commission to draw the border. Throw in the nearly half-million people who cross the U.S.-Mexico border each day, Mexico’s support for the application of the Fourth Amendment to cross-border shootings of its citizens by U.S. Border Patrol agents, and the general principle (noted by Ginsburg) that the law of both jurisdictions should apply, he concluded, and perhaps the Fourth Amendment should cover this case. Kagan appeared receptive to this argument, describing the case as “sui generis” and the border area where the shooting occurred as “something very different from most areas where we know whose jurisdiction it is.”

But even if Hernández’s parents can convince at least five justices that Hernández was protected by the Fourth Amendment, they still face another, potentially larger, hurdle: convincing the justices that they can bring their lawsuit at all. In 1971, in a case called Bivens v. Six Unknown Named Agents, the justices ruled that a plaintiff can bring a private federal action for damages against federal officials who allegedly violated his constitutional rights. The family did not raise this issue in their petition for review, but the justices specifically directed both sides to address the question when they agreed to take on the case.

The court’s four more liberal justices seemed inclined to rule that the family could rely on Bivens to bring their lawsuit. When Deputy Solicitor General Edwin Kneedler, arguing on behalf of the federal government, emphasized that the court had steadfastly declined in recent decades to extend Bivens to new contexts, Kagan led the charge against that argument. Those cases were different, she countered, because the court could point to some remedy that would be available to the plaintiffs, even if it wasn’t exactly what they were seeking. “Here there really is nothing,” she stressed. 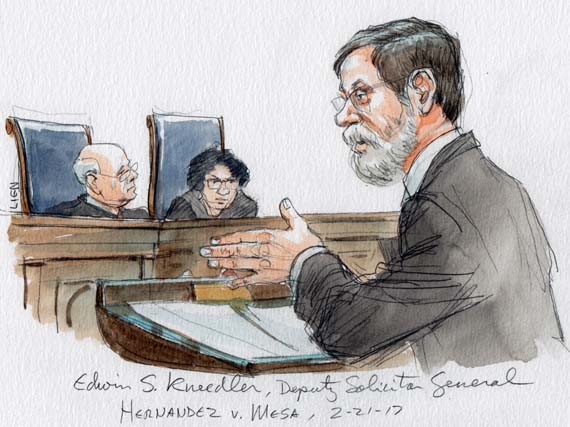 Breyer questioned even the premise of the government’s argument that the court should be reluctant to “extend” Bivens. Why, he asked, are we using words like “create” or “extend”? “Extend,” he contended, assumes the answer to the question. Rather, he argued, the court in Bivens made clear that when a federal agent violates the Fourth Amendment and thereby injures someone, that person will have a remedy unless “special factors” – for example, the federal agent is in the military – are present.

But perhaps most critically for the family, Justice Anthony Kennedy seemed to be a tough sell. Issues like cross-border shootings, which involve the “most sensitive areas of foreign affairs,” he posited, should be resolved by governments, rather than by courts. And responding to Hilliard’s suggestion that families like Hernández’s should be allowed to sue Border Patrol agents because of the high number of cross-border shootings that have taken place, Kennedy drew the opposite inference. The frequency with which such shootings occur, in Kennedy’s view, simply reinforces that this is a “critical area” of foreign affairs that should be left to the executive branch.

Normally, if the court deadlocks 4-4, it leaves the lower court’s ruling (here, in favor of Mesa and against the family) in place. But with confirmation hearings for Judge Neil Gorsuch, the president’s nominee to fill the vacancy created by the 2016 death of Justice Antonin Scalia, now scheduled for mid-March, a 4-4 deadlock could prompt the justices to order new arguments if Gorsuch is confirmed. If so, we could be back here in the fall or winter to hear the newly reconstituted court debate these issues all over again.