At today’s oral argument in the case of a Colorado student with autism, one thing seemed relatively clear: The justices were dissatisfied with the U.S. Court of Appeals for the 10th Circuit’s ruling that school districts can satisfy federal education law as long as they offer a student with a disability an educational program that provides him or her with a benefit that is more than merely de minimis, or non-trivial. It was less clear exactly what standard (if any) the justices might substitute for the “more than merely de minimis” standard, but a standard “with bite” – as Justices Ruth Bader Ginsburg and Elena Kagan put it – would be a welcome development for children with disabilities and their parents.

Jeffrey Fisher argued on behalf of the child, known in the litigation as Drew, and his parents, who withdrew their son from public school and enrolled him in a private school after his individualized education program (IEP) proposed goals for fifth grade that closely resembled goals for earlier years. Fisher told the justices that the federal Individuals with Disabilities Education Act required the school district to offer Drew a program that is “reasonably calculated to provide” him with educational opportunities that are “substantially equal” to those offered to other students. Such a standard, Fisher assured the justices, follows directly from the text of the IDEA. 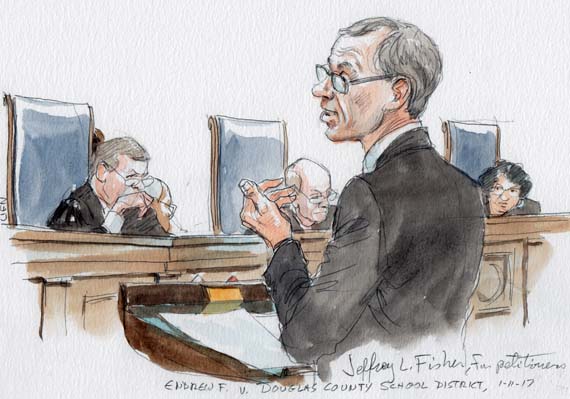 But despite Fisher’s efforts to focus the justices on the text of the statute, they remained skeptical. Justice Anthony Kennedy expressed concern about what new costs Fisher’s proposed standard might impose on school districts, by requiring them to provide additional services, while Justice Stephen Breyer worried aloud about the propriety of the justices – who, he suggested, “don’t know much about” education – creating a standard that could then be interpreted differently by “judges and lawyers and people” all over the country.

Chief Justice John Roberts flagged a different potential problem, echoed by Kagan: How would Fisher’s proposed standard work for students who, because of their disabilities, may not be able to follow the general educational curriculum? Suggesting that there is some “flexibility” in the IDEA, Fisher advanced a slightly different version of his proposed standard: A student’s IEP should generally “be tailored to achieve a general educational curriculum at grade level”; if that is not possible, the IEP should use alternative benchmarks that are “the highest possible achievable by the student.”

Fisher’s modifications to his proposed standard brought it even closer to the one advanced by the federal government, which filed a brief supporting Drew and his family. Irv Gornstein, who argued today for the United States, emphasized that the IDEA requires a program that is “aimed at significant educational progress in light of the child’s circumstances.” 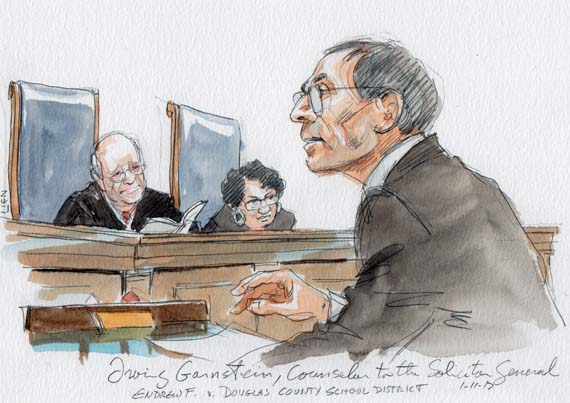 Justice Sonia Sotomayor seemed to summarize the dilemma facing the court neatly, telling Gornstein that “I do think the” IDEA “provides enough to set a clear standard.” But the problem, she continued, is trying to come up with the right words, which will “be less confusing to everyone.” Roberts also pressed Gornstein on this point, telling him that “maybe you have a lot of different adjectives to describe the standard,” but “there’s really nothing concrete there” for courts to review.

Gornstein sought to reassure the justices that the steps that the government’s standard would require are “just what most school boards are already doing.” And although he acknowledged the justices’ concerns that a more stringent standard would entangle the courts in educational decisions, he countered that “the response to that is not to adopt a barely more than de minimis standard.”

Gornstein’s point seemed to resonate with the justices, who pressed attorney Neal Katyal – arguing for the school district – on his efforts to equate the requirement that the IEP provide “some benefit” with the “more than merely de minimis” standard that he was advocating. Roberts pointedly told Katyal that the “some benefit” requirement was “problematic for you” because the court’s cases specifically indicate that the IEP must provide “enough benefit to keep track with grade progress.” “And if that’s what the standard is,” Roberts continued, “that’s certainly more than de minimis.” 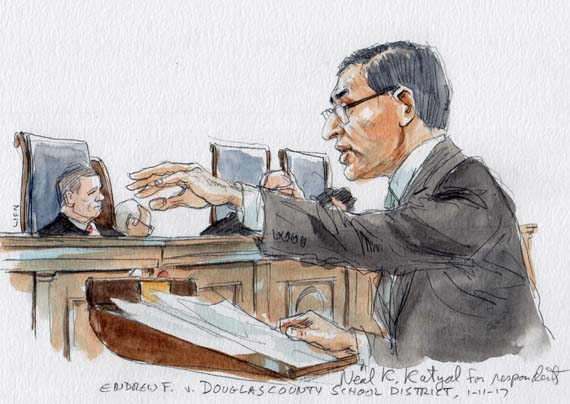 Breyer seemed to agree with Roberts. Even if the phrase “some benefit” is “ambiguous,” he posited, the IDEA has been amended. When you look at the requirements for an IEP, he observed, “you do see in at least two and maybe more places that the IEP is designed” to allow the child to “make progress in the general education.” The combination of “some benefit” and “make progress,” he concluded, results in a more stringent standard than “more than merely de minimis,” much along the lines of what the federal government has proposed.

Katyal appeared to get a little more traction from his repeated reminders that the “more than merely de minimis” standard has been in place, and has worked, for many years, without the courts actually applying “some really low standard.” To require a new standard now, he suggested, would “invite massive amounts of litigation” that would create a “huge morass” for “federal generalist courts.” But some justices were still dubious about the provenance of the “more than merely de minimis” standard, hinting that the standard has no basis in the court’s precedent and was (as Ginsburg put it) instead “invented” – which could make it easier for the justices to replace it with a more stringent standard (like the government’s) that they regard as based on the text of the IDEA.

Today’s argument ended with the justices on the horns of a dilemma, as they so often are. Despite excellent advocacy from all three lawyers, there is no clear and easy answer. But they seemed sufficiently unhappy with the “more than merely de minimis” standard that they are likely to strike it down. The standard proposed by the federal government – which would require the school district to offer a program “aimed at significant educational progress in light of the child’s circumstances” – seems to be the most likely replacement, both because the justices regard it as most consistent with existing law and because it comes from the Department of Education, which – as Breyer noted – has expertise in issues related to education and the IDEA. And even if it’s not the standard that Drew and his family are advocating, they would no doubt nonetheless regard it as a significant victory. A decision in the case is expected by summer.