The detention of immigrants is a major tool for enforcing the immigration laws employed by the executive branch. President-elect Donald Trump has promised to detain immigrants facing removal while their cases percolate through the courts. Detention thus is poised to become more common for noncitizens in removal proceedings.

Yesterday, the justices appeared deeply divided during oral argument in Jennings v. Rodriguez. This class-action challenge to immigration detentions raises questions about whether immigrants, like virtually any U.S. citizen placed in criminal or civil detention, must be guaranteed a bond hearing. The U.S. Court of Appeals for the 9th Circuit affirmed a district court injunction that generally requires bond hearings every six months for certain classes of immigrant detainees.

The Supreme Court’s immigration-detention decisions have followed a jagged path, often tracking American political and social history. In 1953, at the height of the Cold War, the court in Shaughnessy v. United States ex rel. Mezei emphasized the “plenary power” of the U.S. government over immigration and upheld the indefinite detention of a long-term legal immigrant who had briefly visited his native country. In 2001, in Zadvydas v. Davis, the court interpreted an immigration statute to require judicial review of a detention decision because a “statute permitting indefinite detention of an alien would cause a serious constitutional problem.” But, not long after the tragic events of September 11, 2001, in the 2003 case of Demore v. Kim, the court again invoked the plenary-power doctrine to justify the detention of a legal immigrant convicted of a crime pending his removal. These cases left something for each of the parties to argue in Jennings.

The argument required counsel to navigate the thicket of Supreme Court immigration-detention precedent and explain the complex immigration statute and different sub-classes of immigrants in the case. The justices came at the case from several different angles. Many of the justices’ questions focused on gaining a better understanding of how the immigration statute allowed for the detention of different sub-classes of immigrants. Several justices seemed perplexed by fact that the statute provides for detention without a bond hearing of someone who was placed in custody at the time of attempted entry into the country but that, in contrast, a similarly situated noncitizen who was apprehended in the interior of the country enjoys the right to a hearing.

Some of the justices, especially Justice Sonia Sotomayor but also Justices Stephen Breyer and Elena Kagan, found it hard to see how immigrants might constitutionally be detained without a bond hearing. Such a result, they suggested, is out of sync with the court’s decisions dealing with civil and criminal detention, which are highly protective of the rights of persons subjected to a loss of liberty.

Justice Samuel Alito seemed to suggest that the constitutional issues surrounding detention might best be addressed through relief in individual cases rather than in a class action.

Chief Justice John Roberts appeared keen on remanding the case to the lower court to decide the constitutional questions; he suggested that the 9th Circuit should not have employed the doctrine of constitutional avoidance because the statute was so clear – especially with respect to the mandatory detention of noncitizens convicted of certain crimes required by 8 U.S.C. 1226(c). Roberts stated that, to avoid the constitutional question, the 9th Circuit had “draft[ed] a statute or a regulation,” – an approach he characterized as “quite a leap.” 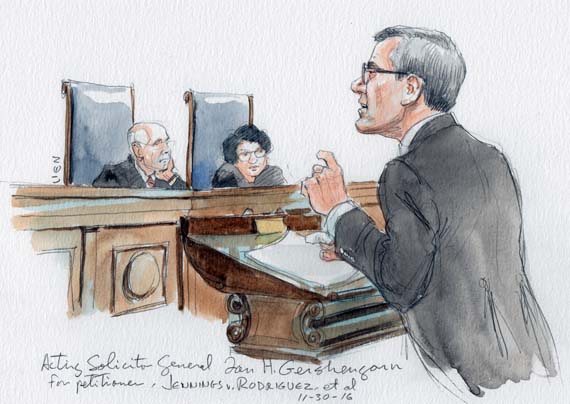 Ian Gershengorn, the acting solicitor general, argued the case for the government, and frequently relied on Demore v. Kim, particularly with respect to making mandatory the detention of immigrants convicted of certain crimes. Gershengorn did not invoke the plenary-power doctrine, nor did he mention the extraordinary decision in Mezei, in which the court authorized the indefinite detention of an immigrant. Rather, the focus of his argument was that Congress had spoken on the issue of detention and “[t]he Ninth Circuit’s decision is a serious misuse of the constitutional avoidance canon.” In his view, the court of appeals rewrote the statutory provisions, rather than reasonably interpreting them to avoid constitutional questions.

Gershengorn ran into difficulty in grappling with questions about when a term of detention would be too long to satisfy due process concerns. He suggested that 20 years without a bond hearing would certainly be unconstitutional, but had a hard time explaining why a two-or three-year detention was not too long. (The mistaken statistical data about the average length of detention that the solicitor general’s office had provided the court in Demore v. Kim came up in the argument, but was not a major bone of contention.) The acting solicitor general surprisingly suggested that delays in deciding removal cases were in part due to the “tremendous process to the individual alien” guaranteed by the statute, including counsel at no expense to the government. Sotomayor questioned whether lengthy detention could be appropriate without a finding that the immigrant was a flight risk or a danger to public safety. 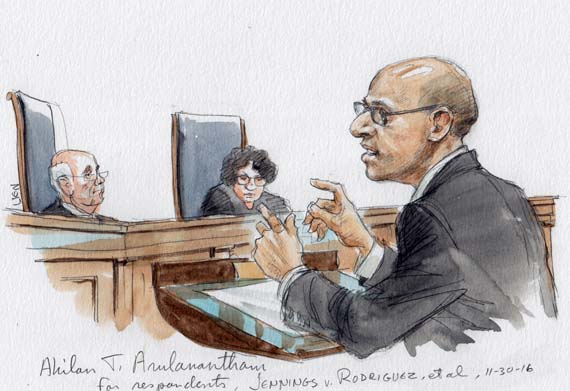 Ahilan Arulanantham of the American Civil Liberties Union of Southern California argued the case for the detained immigrants. He defended the lower court injunction as an appropriate application of Zadvydas and its fashioning of a practical approach to avoiding significant constitutional problems. He contended that the 9th Circuit’s requirement of a bond hearing every six months was appropriate in light of the fact that the USA PATRIOT Act requires bond hearings at such intervals for persons held for national-security reasons.

Arulanantham claimed that the availability of habeas-corpus review in individual cases was insufficient to address the constitutional concerns posed by prolonged detention. He pointed out that such cases on the average take 19 months to be processed by the courts — much too long a period, he argued, to be held in detention without judicial review. Much of the justices’ questioning focused on whether the 9th Circuit had inappropriately relied on the doctrine of constitutional avoidance and whether the case should be remanded to the court of appeals to decide the constitutional questions. None of the justices appeared to buy the lower court’s claim that the provision requiring detention of immigrants with certain criminal convictions could reasonably be interpreted to avoid those questions.

In sum, both sides in yesterday’s argument had some explaining to do to the justices, who seemed troubled by two very different aspects of the case. On the one hand, as even the government seemed to concede, indefinite detention without a hearing is difficult to justify as a constitutional matter. At the same time, however, some justices worried that the 9th Circuit had acted more like a legislature than a court in fashioning the injunction requiring bond hearings every six months. Based on the argument, it may prove difficult for a majority of an eight-justice court to agree on a rationale for deciding the case.