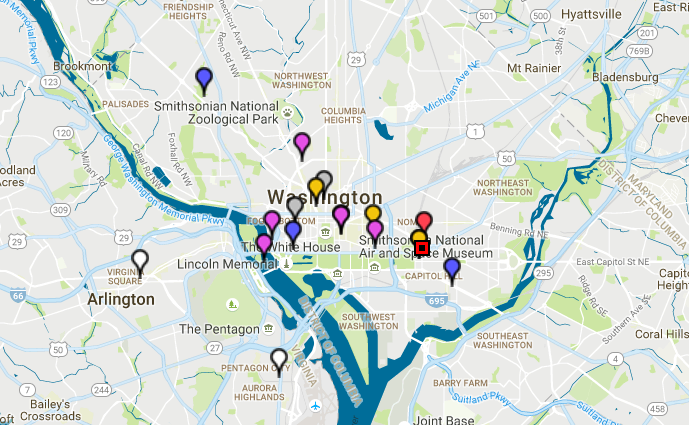 As in prior terms, the majority of the justices’ events during October Term 2016 take place in the Washington area.

The Supreme Court’s days as an eight-member court may soon be drawing to a close. As the country awaits president-elect Donald Trump’s nominee for the vacancy, the sitting justices who participated in post-election speaking engagements faced questions about the election’s impact on the court.

In a November 15 appearance at the Hill Center in Washington, interviewer Bill Press asked Justice Sonia Sotomayor whether she felt apprehensive about last Tuesday’s result. “I’m going to demur from answering that question that way,” Sotomayor said cautiously. “I will answer it in a different way, which is – I think that this is the time where every good person has an obligation both to continue being heard and continue doing the right thing.” Sotomayor urged the audience not to give in to despair or to give up on “pursuing the values that we and others have fought so hard to achieve,” characterizing the situation as a “challenge we all have to face.”

In her remarks, Sotomayor also addressed the topic of bias against women. During her nomination to the Supreme Court, she said, it was “hurtful” to hear others say that she wasn’t intelligent enough. “When I thought about it, I realized that it is the language that many taint women with when it comes to positions of responsibility. We’re either not smart enough, not creative enough, not something enough.” When the interviewer mentioned toughness, Sotomayor responded: “Well, with me they said I was too tough. My former colleague Justice Scalia and I sparred on who would ask the most questions, and I certainly didn’t think that I was harsh on lawyers, but I was described and am described as very aggressive. He wasn’t described as aggressive – and boy, was he.” Molly Runkle covered the event for this blog, with additional coverage from CNN and The Washington Post. Video of the event is available on C-SPAN.

Meanwhile, at the Jewish Federations of North America’s 2016 General Assembly, Kenneth Feinberg asked Justice Ruth Bader Ginsburg how the court would be affected by the election. Ginsburg, who came under fire earlier this year for criticizing Trump in interviews, replied matter-of-factly: “There is an existing vacancy, and President Trump will fill it.” She added that maybe then, “Congress will do some work.” The Wall Street Journal and CBS News reported on Ginsburg’s comments.

Ginsburg made a fleeting reference to the president-elect when she appeared in the Washington National Opera’s November 12 performance of “The Daughter of the Regiment.” In the non-singing role of the Duchess of Krakenthorp, Ginsburg at one point demanded to see the birth certificate of the title character, Marie, declaring: “We must take precautions against fraudulent pretenders.” Ginsburg’s dialogue also included a line about “throwing away your umbrella in a rainstorm because you are not getting wet,” a callback to her dissent in Shelby County v. Holder. Coverage of Ginsburg’s cameo comes from USA Today, the Los Angeles Times and The Washington Post.

In other November events:

Retired Justice John Paul Stevens served as one of the presiding justices for the final round of this year’s Harvard Law School Ames Moot Court Competition. HLS has posted video of the final, which was held on November 1, online. Coverage comes from Harvard Law Today.

On November 3, Justice Stephen Breyer spoke about his latest book, “The Court and the World,” at a luncheon hosted by the Supreme Court of Delaware and the Delaware State Bar Association. Of the court’s split decisions last term, Breyer explained: “If we don’t decide because it’s 4-4, it’s as if we never took it.” Delaware Online covered his speech.

Sotomayor spoke at the Leadership Alliance Presidential Forum in Washington on November 4, and Justice Samuel Alito hosted the 2016 American Inns of Court Celebration of Excellence at the Supreme Court on November 5.

The Supreme Court Bar gathered at One First Street for a memorial to Justice Antonin Scalia on November 4. Chief Justice John G. Roberts, Jr., delivered the concluding remarks at the ceremony, recalling Scalia’s “vigorous” participation and occasional “priceless sotto voce insights” at oral argument. “Whatever the discipline, whatever the role, Justice Scalia was committed to finding the right answer. And once he had settled upon what was right, he let the chips fall where they may, and cared not a whit what others thought about it.” The transcript and the video from the memorial, which was livestreamed, are available on the Supreme Court’s website. Edith Roberts covered the event for SCOTUSblog. Additional coverage comes from National Review and The Washington Post.

On November 7, Breyer met with students from the University of California Washington Program. UCDC posted photos and a recap of Breyer’s visit on its Facebook page.

Sotomayor was the featured speaker for College Bound’s 25th Anniversary Celebration on November 9 at the Supreme Court. The following day, she was in New York, discussing her book “My Beloved World” at the launch of the NYU School of Law’s Center for Diversity, Inclusion, and Belonging. A recap is available on NYU’s Facebook page.

Justice Elena Kagan headed to Philadelphia this past weekend, sitting for a conversation with Harvard Law School Dean Martha Minow at the American Philosophical Society on November 11 and speaking at the Appellate Judges Education Institute 13th Annual Summit on November 12.

On November 14, Sotomayor gave the Benjamin Cooper Memorial Lecture for the Georgetown Day School community in Washington. According to Mark Sherman of the Associated Press, the event was closed to media.

Looking ahead to the rest of November, Alito and Justice Clarence Thomas are featured at the Federalist Society’s 2016 Lawyers Convention, which will focus on “The Jurisprudence and Legacy of Justice Scalia.” Alito gave opening remarks this morning, and Thomas will speak at the convention’s annual dinner tonight.

Also on November 17, Ginsburg will be honored at the Sustained Dialogue Institute’s Third Annual National Dialogue Awards in Washington.

On November 19, Alito will deliver a lecture on the reach and limitations of the Constitution as part of the New-York Historical Society’s Bernard and Irene Schwartz Distinguished Speakers Series.

And finally, to recap the justices’ mid- to late-October 2016 events: