It was, as attorney Clifford Sloan – who represents Texas death-row inmate Bobby James Moore – said, a “vitally important, life-or-death” issue: Does the scheme that Texas uses to determine whether an inmate is intellectually disabled, and therefore cannot be executed, violate the Constitution? Perhaps reflecting the significance of the case, today’s oral argument included some occasionally testy exchanges, along with questions and responses that were often very detailed. But by the end of the hour, the Texas framework seemed to be in jeopardy and Moore seemed likely to prevail, even if the justices did not seem ready to issue a sweeping ruling on the death penalty and the intellectually disabled.

Moore’s case was the third time in 14 years that the Supreme Court had considered the question of the death penalty for the intellectually disabled. In 2002, in Atkins v. Virginia, the justices ruled that the Eighth Amendment’s bar on cruel and unusual punishment prohibits the execution of the intellectually disabled. And in 2014, in Hall v. Florida, the court indicated that the determination of who is mentally disabled should be “informed by the medical community’s diagnostic framework.” The heart of the question before the court today was whether Texas courts can use a framework that relies (among other things) on standards for intellectual disability that date back to 1992, as outlined in a 2004 decision by the Texas Court of Criminal Appeals, when more current standards are available. 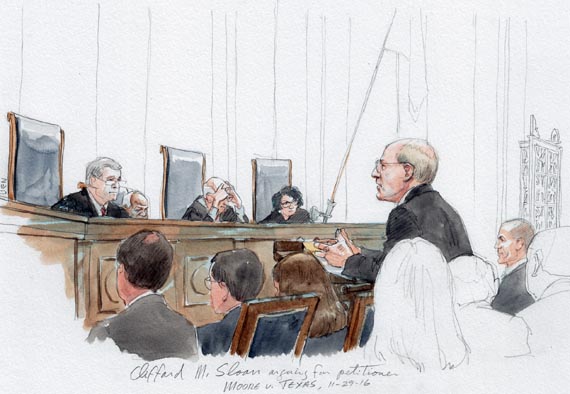 During today’s oral argument, Sloan’s sharpest critics were Chief Justice John Roberts and Justice Samuel Alito. But Roberts focused on a procedural point and was otherwise mostly quiet, other than to play traffic cop when more than one justice sought to ask a question at the same time. Roberts suggested that what he described as Moore’s “long laundry list” of objections to the ruling against him by the CCA did not actually reflect the question that the court agreed to review – whether Texas can prohibit the use of current medical standards on intellectual disability.

Sloan and some of the court’s more liberal justices countered that Moore’s broadside attack on the entire Texas framework and the narrower question that he had asked the court to review were essentially two sides of the same coin. Justice Ruth Bader Ginsburg (who sounded as if she were suffering from a bad cold) pointed out that the CCA had made clear that the state habeas court was wrong to use the current medical standards, rather than relying on the standards outlined in its 2004 opinion. And in addition to the 1992 medical standards, Justice Elena Kagan added, the 2004 opinion also includes seven “evidentiary factors” for courts to consider in determining intellectual disability that are not consistent with either the older medical standards or the current ones.

Justice Anthony Kennedy observed that the court’s decision in Atkins did leave the states with some discretion to define intellectual disability. What rule, he asked Sloan, would preserve that discretion?

Justice Stephen Breyer echoed Kennedy’s concern. In some cases, he observed, it will be easy to determine whether an inmate is intellectually disabled. But, he continued, how should a district court decide the closer cases? Without a clear uniform standard, he warned, there will be disparities in who is or is not defined as intellectually disabled. “Are we supposed to have all of those hearings here,” he asked, in the Supreme Court?

In response, Sloan stuck with his core point: The determination of intellectual disability must be informed by the medical community’s diagnostic framework. Whatever the national standard is, he emphasized, Texas is an extreme case.

Arguing on behalf of the state, Texas Solicitor General Scott Keller emphasized that the Texas framework was not a “free-floating” one but was instead consistent with the Supreme Court’s decisions in Hall and Atkins, and he tried to downplay the role that the seven “evidentiary factors” played in the CCA’s ruling in Moore’s case. 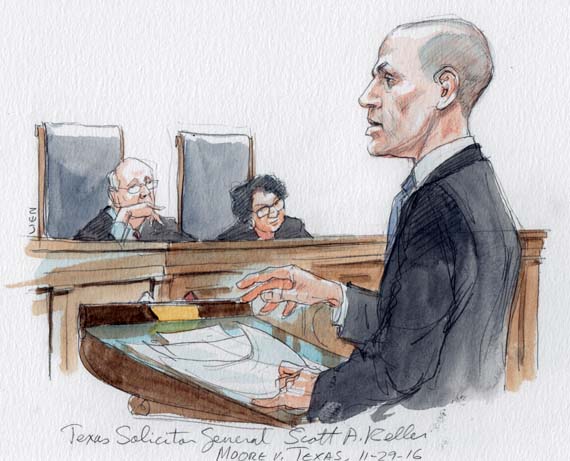 Keller reiterated that states are supposed to retain some discretion as to how they determine whether someone is intellectually disabled and therefore not subject to the death penalty. He stressed that Texas has long used a three-prong test, recognized by the Supreme Court in Atkins and Hall, to make that determination. But Kagan retorted that the court’s decision in Hall made clear that, even if the state has adopted the three-part test, it is not permitted to apply that test in whatever way it wants.

Along similar lines, Justice Sonia Sotomayor complained that, in applying one prong from the test – whether Moore was limited in his practical skills – to Moore’s case, the CCA had focused only on Moore’s strengths, without considering his deficits. And those deficits, she suggested, were significant. She read a lengthy list of examples that she regarded as demonstrating Moore’s intellectual disability, including eating from garbage cans. Although Moore would get sick after doing so, she pointed out, he would then turn around and do it again – indicating that he could not learn from his mistakes.

When the argument concluded, Moore seemed to have the five votes – from Kennedy, Ginsburg, Breyer, Sotomayor and Kagan – that he would need for an outright win on the merits. If so, what effect will the court’s ruling have on other Texas inmates, and on inmates on death row in other states? That remains to be seen; a decision in the case is expected by summer.