Argument analysis: Searching for a remedy for constitutional violation on citizenship

Only hours after Donald Trump was declared the winner in last night’s presidential election, it was business as usual in at least one Washington institution: the Supreme Court of the United States. With the seat left open by the death of Justice Antonin Scalia still vacant, presumably to be filled with the president-elect’s nominee, the eight justices heard oral arguments in a case that touches, at least indirectly, on one of Trump’s signature issues, immigration.

The issue before the justices was a U.S. citizenship law that imposes more stringent requirements on a child who is born outside the United States to an unmarried father who is a U.S. citizen than it does on an otherwise identically-situated child whose unmarried mother is a U.S. citizen. Luis Ramon Morales-Santana, a longtime resident of the U.S. whose father was a U.S. citizen, argues that this different treatment violates the Constitution’s guarantee of equal protection under the law. After nearly an hour of oral argument, the justices seemed ready to agree with Morales-Santana, even if they could not necessarily reach a consensus on how to remedy the constitutional violation.

Morales-Santana’s challenge to the law came when the federal government initiated proceedings to deport him from the United States. The lower court agreed with him that the law governing citizenship for the children of unmarried parents violated the constitutional right of a U.S.-citizen father to be treated the same as a U.S.-citizen mother, and the Supreme Court agreed to review the question earlier this year.

Arguing on behalf of the United States, Deputy Solicitor General Edwin Kneedler emphasized that the different treatment of unmarried mothers and fathers served two important interests: ensuring that U.S. citizens have sufficient ties to the United States and avoiding a scenario in which the children of U.S.-citizen mothers are born “stateless” – that is, with no citizenship at all. 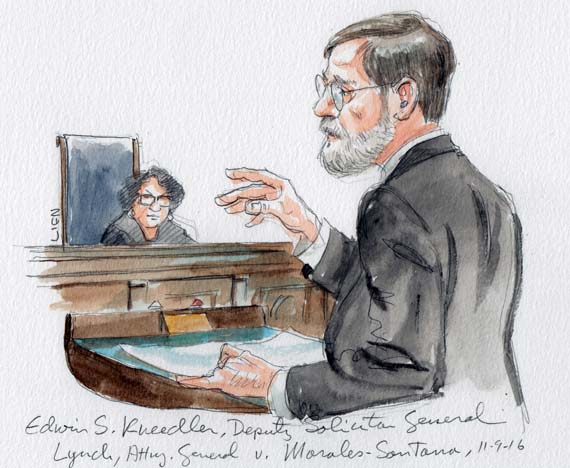 But the justices appeared skeptical of both these rationales. Justice Sonia Sotomayor pressed Kneedler to explain why exactly unmarried U.S.-citizen fathers would have less of a connection to the United States than unmarried mothers.

Justice Elena Kagan quickly followed up, asking Kneedler why the government couldn’t achieve the same objectives using “entirely gender-neutral language” that would apply to both unmarried fathers and unmarried mothers.

Justice Stephen Breyer chimed in as well, first asking Kneedler to provide a rationale for the discrimination created by the statute and then pointing out that “friend of the court” briefs filed in support of Morales-Santana dispute the government’s contention that statelessness is more of a problem for the children of unmarried U.S.-citizen mothers than fathers.

But the government’s strongest opposition came from Justice Ruth Bader Ginsburg. She observed that, although the government may be providing a “sophisticated rationale” for the disparate treatment of mothers and fathers, the law at issue dates back to the early 20th century – a time when myriad laws assumed that unmarried mothers and their children should be placed together, and separated unmarried fathers from their children. No one believed that these schemes were a problem, she noted, until the 1970s, when a “whole series of cases” “recognized that, indeed, there was a violation of equal protection.” (Although Ginsburg did not say so, many in the courtroom were aware that Ginsburg herself was the mastermind behind the equal protection strategy to which she referred.)

This is not the first time the court has taken on the question presented by this case. Six years ago tomorrow, the court heard oral argument in a case that featured the same issue, but with Kagan recused. The justices deadlocked 4-4, which likely means that one of the court’s more conservative justices joined Ginsburg, Breyer and Sotomayor in voting to strike down the law. If so, there seems to be a very good possibility that there will be at least four votes (from Ginsburg, Breyer, Sotomayor and Kagan) to uphold the lower court’s decision against the government, and perhaps five for an outright victory for Morales-Santana on the question whether the law’s different treatment of unmarried mothers and fathers violates the Constitution.

Reflecting this possibility, much of the argument focused on a second question: If the statute does violate the Constitution, what – if anything – should the court do about it? The lower court declared Morales-Santana to be a citizen of the United States, but the justices clearly regarded the question as more difficult.

Justice Anthony Kennedy summarized the court’s dilemma succinctly. He observed that, if the court were to rule that the statute’s lower residency requirement for unmarried mothers also applied to unmarried fathers, it would make it easier for children born to both sets of parents to qualify for citizenship. But if the court were instead to rule, as the government urged, that the more stringent residency requirement for unmarried fathers also applies to unmarried mothers, it would make it harder for those children.

Kagan was clearly troubled by the prospect of applying the more stringent residency requirement to both sets of parents. That would mean, she pointed out, that Morales-Santana would not have any remedy at all, notwithstanding the court’s ruling in his case that the statute violated the Constitution.

Justice Samuel Alito, though, saw a problem with applying the less stringent requirement to both sets of unmarried parents: It would result in more favorable treatment for parents who are not married than for a married couple with only one U.S.-citizen parent, who must meet residency requirements similar to those for unmarried U.S.-citizen fathers. Ginsburg quickly countered that Morales-Santana’s challenge centers on gender discrimination – an allegation that the law provides better treatment to unmarried mothers than unmarried fathers – rather than a bias based on someone’s marital status. Applying the lower bar would just mean that married parents of both genders would be treated poorly, she concluded. 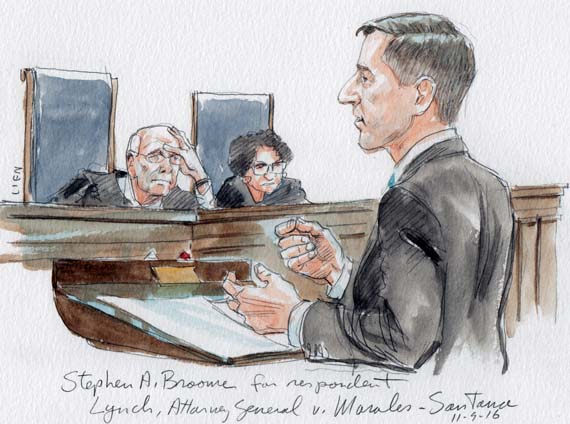 Other justices expressed worries about the broader impact of applying the lower bar to both unmarried mothers and unmarried fathers. Suppose there were evidence, Kennedy asked Stephen Broome, who argued on behalf of Morales-Santana, that 100,000 additional people would qualify for citizenship under Morales-Santana’s proposed rule? Broome maintained that it would not matter, but Kennedy pressed him: What about 200,000 more citizens? To Kennedy, at least, it might matter.

Still other justices debated the question of congressional intent. Specifically, although there seemed to be a consensus that the court should try to determine what Congress would have wanted to do if it had known that the law was unconstitutional, the justices could not seem to agree on which Congress’ intent was relevant – the one that enacted the law or the current one?

For Chief Justice John Roberts, the answer was clearly the Congress that enacted the statute in the early 20th century. When Ginsburg posited that such an answer would be “strange,” given that the Congress which enacted the law “took gender-based norms for granted,” Roberts admonished Ginsburg and Broome: “Don’t pretend that you are implementing Congress’s intent when you look at what … a Congress 60 years later would do.”

Kagan, as is so often the case, proposed a solution to the dilemma facing the court. She noted that, in an earlier case in which the court was “concerned about whether Congress would prefer a different remedy,” the justices had issued their ruling but stayed their judgment to give Congress an opportunity “essentially to do it a different way if it wanted to.” Broome was unenthusiastic, arguing that the court must take action to address a constitutional violation, but Kagan’s middle ground may find a warmer reception among her colleagues. We will likely know more sometime next year.